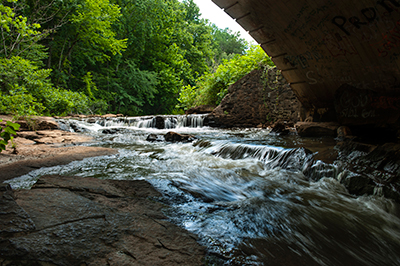 The Blackwater Creek Watershed (H03) has a drainage area of 42,000 acres (170 km2). Three municipal jurisdictions (Lynchburg City and Bedford and Campbell Counties) govern land use throughout this watershed. The portions of the watershed in Lynchburg City are primarily urbanized and managed within the context of the City’s comprehensive plan. Areas of each of the two counties adjacent to Lynchburg City are increasingly becoming more urbanized. This growth is radiating out into the undeveloped portions of the watershed. Blackwater Creek is a major tributary of the James River in Virginia.

College Lake is a 25-acre reservoir located on the campus of University of Lynchburg within the Blackwater Creek watershed. It is the largest urban lake in Lynchburg. It is located in a critical position, capturing surface waters from multiple sources of the Blackwater Creek watershed just before emptying into the James River. College Lake’s ecosystem is degrading rapidly as it fills with sediment, nutrients, and raw sewage, resulting in the rapid development of watershed and stormwater management problems.

The effects of these problems are startling. The dam for College Lake was built in 1934. At that time the lake measured 44.5 acres with a maximum depth of 30 feet. Today, the lake has less than 25 acres surface area with an average depth of 7 feet. In areas near the center of the lake, the sediment has accumulated to the point of breaching the surface. Despite the presence of the lake, sediment still makes its way into the Blackwater Creek, which empties into the James River and ultimately into the Chesapeake Bay.