Each May our musical theatre students work with emerging New York City musical theatre composers and lyricists. During their time online or on campus, the composers/lyricists write songs specifically for our students and ensemble. They coach the students for in-person or online performances. Our artistic director is James Ballard, an NYC based composer, lyricist, and writer who graduated from the New York University Musical Theatre Writing Program. 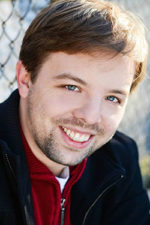 James Ballard is a composer, lyricist, and writer who has written works for choir, concert band, orchestra, pop/rock/jazz ensembles, and musical theatre. As a composer, his shows include the full-length musical The Oxford Epidemic, the one-act musical The Jerk Next Door, and the 10-minute operetta A Door (commissioned by the 2017 Prospect Musical Theatre Lab), all co-written with lyricist/librettist Seth Christenfeld. As composer/lyricist, shows include the heavy metal oratorio The Darkest Day and the theatrical song cycle Worlds To Explore. His work has been performed at venues across the country including the Kennedy Center in Washington D.C., Rockwell Table & Stage in Los Angeles, and numerous clubs and cabaret theatres in New York City including Feinstein’s/54 Below, Joe’s Pub, the Duplex, and the Laurie Beechman Theatre.