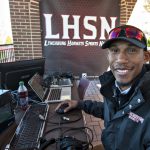 Although Terry Clay may not appear on screen, he plays a major role in University of Lynchburg’s sports broadcasts. While the video cameras focus on athletes and sportscasters, Terry is behind the scenes directing the camera operators and managing the devices that stream video footage together into a seamless show. Sometimes, though, he picks up […]