/ News / Lynchburg senior connects highway officials from around the world

D’Andria Alston-Thomas ’19 has spent this summer helping transportation officials from around the world learn from each other. 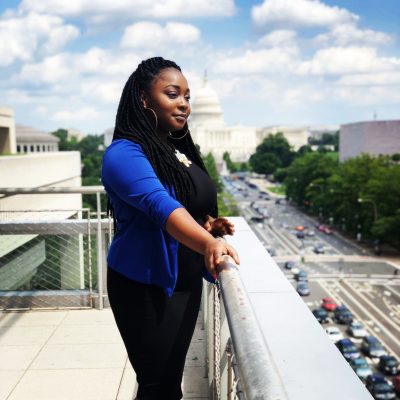 The rising senior has a paid internship in the Federal Highway Administration’s Office of International Programs. “My department and my job focus on all the agreements that the Department of Transportation has with other departments around the world,” Alston-Thomas said.

The office exists to foster exchanges between highway officials in the U.S. and their counterparts overseas. Sometimes officials travel abroad to learn about tactics for inspecting bridges, preventing drunk driving, or building  highways. Other times, they are collaborating with foreign counterparts on research. Regardless, Alston-Thomas has been helping them make the connection this summer.

Originally from Greensboro, North Carolina, Alston-Thomas said she found the college search process frustrating until she attended the University of Lynchburg campus for a scholarship competition. All the other schools disappeared from her radar. “I fell in love with the school,” she said.

She opted in to Westover Honors because she always prefers to be challenged. She said she has enjoyed the interactive, demanding classes as well as the attention of her professors.

Her 2018 internship has proven more interesting to her since it relates directly to her international interests. She lives within walking distance of the Capitol Building and Union Station, putting her right in the middle of D.C. life. “It’s always moving,” she said. “There are a lot of young professionals, and a lot of students.”

She recently ran into two other Lynchburg students at work. One had just started a job at the DOT, and another was visiting a relative who works there.

The internship also has been valuable for helping her meet people in high places. Some of her colleagues introduced her to the DOT’s chief financial officer and chief acquisition officer. She’s been given opportunities to shadow directors and learn about their jobs. “It’s awesome over here, especially my senior year,” Alston-Thomas said. “I’m doing a lot more networking.

Her senior year will be different for Alston-Thomas, because she will spend the fall semester studying abroad in Austria at one of Lynchburg’s partner universities. In the spring, she will be back on campus and she looks forward to seeing her friends again.

She also plans to continue working for the Office of Equity and Inclusion in the spring. She has high hopes for Lynchburg’s 2019 multicultural gala, after helping launch the first event this spring.

“I’m just excited to finish out strong,” she said.