It seems appropriate that this year’s Sommerville Scholar winner uses a multidisciplinary approach to education, one that matches the award’s namesake who taught psychology, philosophy, and education. Ashani Parker ’21 was named the University of Lynchburg’s Sommerville Scholar Friday during a livestreamed, socially distanced event in front of Hopwood Hall. The annual award, the University’s highest academic honor, has been given out since 1965 and is named for the late professor Richard Clarke Sommerville.

“I feel so grateful to the faculty members that I’ve developed a close relationship with, and it’s thanks to them that I have been able to get to this point. The research I am able to do is because the faculty were supportive of something I am passionate about,” Parker said. 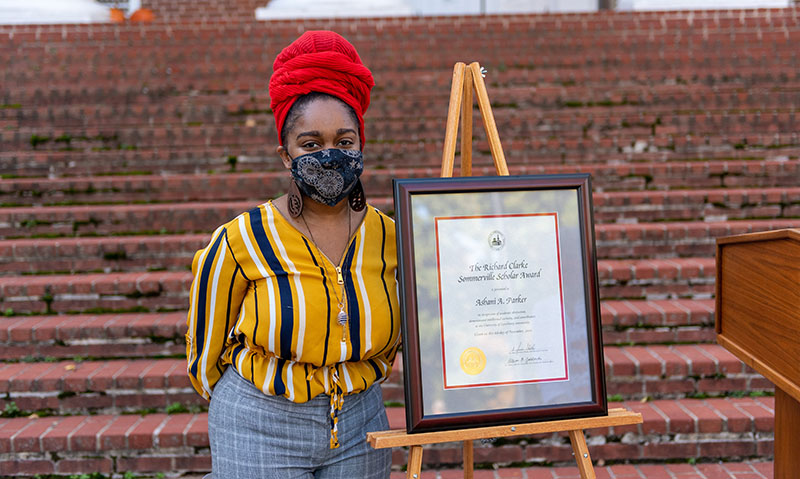 Parker, a native of Newport News, Virginia, is a psychology major as well as a self-designed liberal arts major and minoring in archaeology, museum studies, and history. She is a member of the academic honor societies Phi Eta Sigma, Mu Sigma Theta, and Psi Chi and a Westover Honors Fellow, where she serves on the executive board.

“Ashani’s curiosity, positive attitude, and intelligence are noteworthy. She leaves a positive, lasting impression on people,” Psychology Professor Dr. Virginia Cylke said in Parker’s recommendation letter for the scholarship “Altogether, a student of Ashani’s caliber and character is difficult to find. She is the kind of person we would all like to have working with us, and I have no doubt that she will have a successful and fulfilling life.”

Jablonski said, “It is Ashani’s driving passion and curiosity coupled with her drive to make a difference that stood out to the [selection] committee. The committee believes she exemplifies the scholarly habits and appetite for learning that is celebrated by the Sommerville scholarship.”

Parker’s drive to make a difference extends beyond the classroom. She serves as the secretary of the Native American Student Association and president of the Archaeology Club. She also works as a gallery assistant at the Daura Museum and a cultural resource assistant at Historic Sandusky. In summer 2019, Ashani had the opportunity to intern with the Smithsonian’s Recovering Voices program, where she explored her interest in endangered languages.

“My involvement on campus has made me more eager to explore new ways to engage with my peers. I have developed close bonds with my professors and learned from their wisdom. And, I have gained a plentitude of professional skills from my experiences,” Parker said in her scholarship application.

For Summer 2020, she accepted an internship with the Penn Museum’s Sumerian Dictionary Project and with “Where Are Your Keys,” a revitalization program currently located in Vancouver, Canada. Both internships were postponed to Summer 2021 due to COVID-19 restrictions. After completing her undergraduate degree, Ashani hopes to pursue a graduate degree in linguistic anthropology and comparative studies.

“When I first came to the University of Lynchburg, then Lynchburg College, I was a first-generation college student with a lot to prove and a commitment to higher learning. It was not simply a desire to prove myself capable of succeeding — it was a need,” she said. “My time at Lynchburg has given me the foundational skills and knowledge to pursue these goals.” 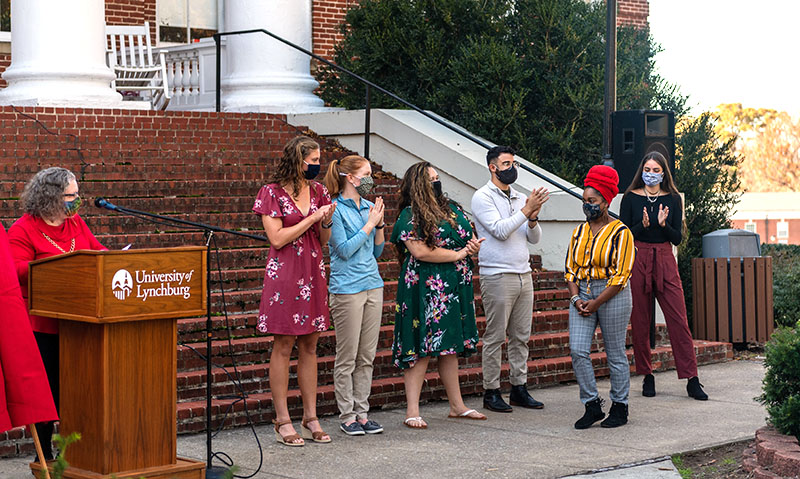