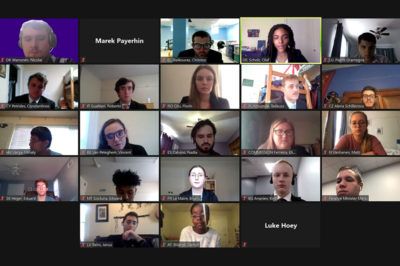 Lucas, an international relations and security studies major from Raleigh, North Carolina, said the event was his first diplomatic event with Lynchburg.

“I enjoyed the structured debate format and appreciated the general courtesy from all other ministers who took part in the event. I felt as though almost everyone involved made at least one positive contribution to the discussion. I hope I can participate in the competition again in the future,” he said.

The simulation was a gathering of about 180 students from universities and colleges that represent various member-states of the European Union. This year, Lynchburg represented Italy and Malta, working on legislation related to the future of transatlantic (EU-US) relations and on policies addressing the current COVID-19 crisis. Their delegation was involved in debates of the European Council, the European Commission, and the Council of Ministers.

“The different format this year took nothing away from the strong performance of our group. They influenced discussions and moved proposals so as to balance the collective good of the European Union with the specific interests of their countries,” said international relations professor Marek Payerhin, who leads the program.