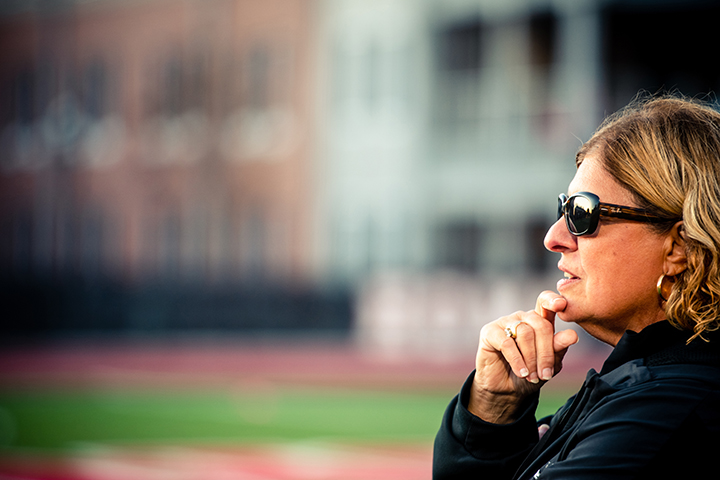 Surrounded by an entourage of more than a dozen former players, colleagues, and University of Lynchburg administrators, Enza Steele was immortalized in the field hockey world last winter.

Of course, the legendary Hornets field hockey coach of more than four decades cemented that legacy on the Lynchburg campus long ago, but 2019-20 turned into a victory lap for Steele.

In early November, her current Lynchburg team beat Wooster (Ohio) 3-1 for Steele’s 600th career victory, making her one of just five college field hockey coaches ever to reach the milestone.

The next weekend, the Hornets claimed their 20th Old Dominion Athletic Conference title, all of them under Steele’s tutelage. Lynchburg then made a run to the quarterfinal round of the NCAA Division III tournament, beating a pair of nationally ranked teams in the process.

In January, the National Field Hockey Coaches Association enshrined Steele into its hall of fame at the NFHCA Annual Convention in Lake Mary, Florida.

“It was one of the most memorable days of my life,” Steele said of her hall of fame recognition. “I don’t think you can really put a name or a feeling to it.”

As incredible an honor as the hall of fame induction was, Steele said what made it more special was the outpouring of support from the Lynchburg community. Alumnae of all ages — more than a dozen of them — traveled to central Florida to celebrate their coach’s accomplishment.

“Her love for field hockey, it’s more than a job.” — Jenni Smith Releford ’17

One of them was Phebe Phelps Elliott ’84, Steele’s first All-American and one of her first recruits at Lynchburg.

“Enza had a tough road when she came here. She was young,” Elliott recalled. “We weren’t that much younger than her.

“She was from the North [Steele is a New Jersey native] and she was coming to the South, and so that was a culture change.”

After working as a graduate assistant coach for the Ithaca College Bombers, Steele arrived at Lynchburg in 1979. She helped a mediocre Hornets field hockey program quickly morph into a national powerhouse. Under her watch, Lynchburg managed an Association for Intercollegiate Athletics for Women national runner-up finish in 1981, and the Hornets won the first three ODAC championships, starting in 1982.

That success started with recruiting. Elliott, for one, had offers to play for much bigger, and at the time, more successful schools.

“She told me I could go to a big school and be a small fish in a big pond, or I could be a big fish at Lynchburg,” Elliott recalled. “I was going to be a big fish.”

But it isn’t only an excellent record that made Steele a great coach. She’s always had a knack for getting her players to buy into the team concept. 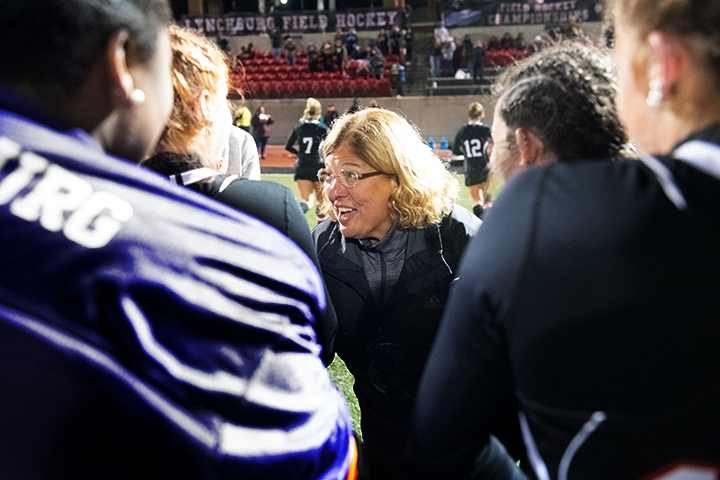 Steele’s intensity has rubbed off on more than her student-athletes. Up-and-coming coaches, like current Hornets assistant coach Jenni Smith Releford, have also witnessed Steele’s legendary vigor firsthand. Releford joined the Lynchburg staff after a successful career at Michigan State, but Steele’s fire at the Division III level rivals anyone she saw at the Division I level.

“You’re not going to meet anyone who is as passionate as her,” Releford said. “Her love for field hockey, it’s more than a job. You’re never not going to see a smile on her face, because she loves field hockey.”

That love has been on display on Shellenberger Field time and time again.

The program has reached 18 NCAA Division III tournaments and the national quarterfinal round five times, including this past season. And the Hornets are well-suited to continue that success: Lynchburg loses just one senior from the 2019 team and returns every starter next season.

In addition to her coaching success in field hockey, Steele led the Lynchburg women’s lacrosse program for 20 seasons to the tune of a 215-137-3 record and five ODAC championships. Her combined record makes Steele the winningest coach in the history of ODAC athletics.

As the Hornets’ senior woman administrator, Steele oversees the athletic department’s faculty and team mentor program. She teaches in the School of Health Sciences and Human Performance. For years, she has involved her students in service by having them practice teaching physical education for Head Start programs.

“When they were playing that game, I could see who was in charge of that team,” Garren said. “The dynamic, the spirit that she had, and the players quickly picked it up.”

The support from her Lynchburg community, Steele said, was overwhelming — so much so that the University’s reception after the NFHCA banquet almost refused to end.

“We would hug and say goodbye,” Steele recalled, “and then we would still be there a half-hour later telling stories.

“It was a time to tell the girls and tell my family that this wonderful journey would have never existed without them.”

It was also surreal when, the following morning, a trio of young field hockey coaches she had never met stopped her in the convention center lobby for “a photo with the hall of famer.”

“It was really incredible to see how Coach Steele was regarded, not only by our alumni, but by her peers in the sport,” Waters said. “The whole experience was special, and we could not be happier for Coach Steele to receive this recognition.”

But for those who played for her, her connection with the next generation is no surprise at all.

“She teaches the game of life.”