/ Magazine / From Bateauman to Veteran to College Grad

Business administration major Dylan Schumacher ’20 likes to reminisce about “the best six weeks” of his life.

In March 2012, Schumacher and five of his “bateau brothers” embarked on the Marshall Expedition, a treacherous, 225-mile journey up the James and Jackson rivers, then 130 miles down the Greenbrier and New rivers, to retrace U.S. Chief Justice John Marshall’s famous 1812 water survey. 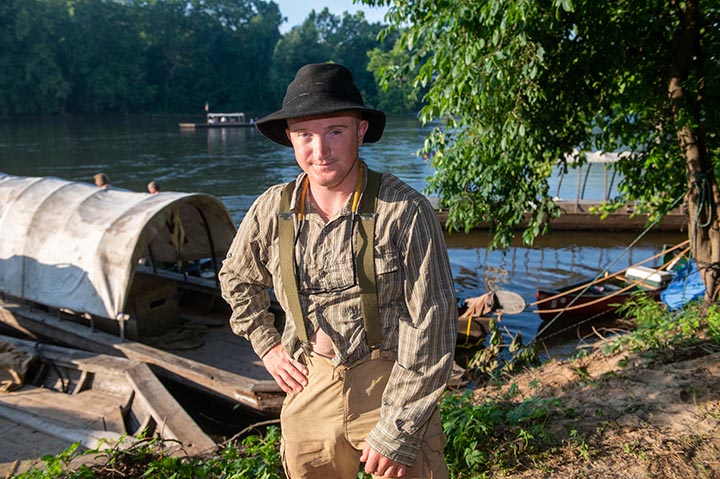 In the original expedition, Marshall wanted to determine if a canal could connect Richmond with the Ohio Valley. Schumacher’s journey was born from a passion for history and bateaux.

Schumacher’s friend Adam Shaw received a Young Explorers Grant from National Geographic to pay for the trip, and Shaw’s parents sacrificed their backyard on Peakland Place in Lynchburg for two months of intense, 9-to-5 construction of the bateau, which the crew named Mary Marshall.

Unlike Marshall, whose crew launched in Lynchburg, the 2012 crew started just outside of Richmond, at Watkins Landing near Powhatan. Why?

“Just because,” Schumacher said. “No one’s done it in modern times — not since bateaux were used as a primary means of commerce.”

Building a boat for free was part of the appeal when Shaw called him up to join his crew, Schumacher said. But there was something else, something bigger.

“The primary reason behind doing the expedition was to be able to captivate a larger audience into the world of the James River Batteau Festival,” he added. In the annual festival, reenactors in homemade boats retrace the river route that bateaux used to carry tobacco from Lynchburg to Richmond up until the 1840s.

Schumacher has floated on the Columbia Drifter and the Debbie, a boat named after a Texas Inn waitress who joins the crew each summer. In 2015, Schumacher built his own bateau, the Lizzie Langley, with his father and younger brother Isaac, who was also part of the Marshall Expedition.

“Everyone on the crew really loves what the James River Batteau Festival stands for and the resulting community that develops around the festival,” Schumacher explained. “I always call it my bateau family because there’s a level of cohesiveness and camaraderie that parallels that of being in the Army or any other military branch.”

Schumacher would know. He’s a veteran. After four years of active duty — including a 12-month assignment in Kuwait — he is now a sergeant in the U.S. Army Reserve. In addition to training cadets during the summer, he serves as satellite communications system operator and maintainer.

Last spring, he entered the Army’s annual Best Warrior Competition and was named Noncommissioned Officer of the Year at the brigade level and the 104th Division level. The competition involved written tests, battle drills, day and nighttime navigation exercises, obstacle courses, and a 12-mile road march while carrying 40 pounds of weight.

As grueling as that competition was, it had nothing on the Marshall Expedition, Schumacher said. While the crew had fun navigating whitewater and taking in the beauty of Appalachia, they worked tirelessly nearly every day from sunrise until dark. One night, they battled the river until 1 a.m.

The Jackson River posed the biggest challenge of the journey, Schumacher said. “The James’s headwater splits and turns into the Cowpasture and the Jackson, and we went 22 to 23 miles up the Jackson. That section was very difficult because it was very steep. And there was a very difficult class-three rapid that we had to attain, where we had to set up the rope block-and-tackle a couple of times. I’d never been on the Jackson before, so that was all new to me.”

Soon after that unforgettable trek, Schumacher enlisted in the Army because he “needed a change of pace.” In 2017, he was honorably discharged. He then completed his associate degree in business administration at Central Virginia Community College and transferred to the University of Lynchburg in 2018.

While he’s vying for a career in information technology management, Schumacher has a passion for history. He also likes to draw his own conclusions. One of his favorite professors at Lynchburg is Dr. Mike Santos. His third and final class with Santos in Fall 2019 was The U.S. and the World, a 1776-to-current-day U.S. foreign policy class. Not Schumacher’s favorite subject, but Santos made it worthwhile.

“He requires you to delve deeper behind just the written text and actually read into the subtle nuances, and gently forces you to really use your brain to articulate thoughts instead of just regurgitate facts about issues,” Schumacher said.

Santos has been equally impressed with Schumacher. “Dylan is a self-starter. The thing that most impresses me about him is his desire to learn,” he said. Being an older student with military experience, I’ve asked him about his future plans. His response, music to any teacher’s ears: ‘Right now I am enjoying being here and learning everything that I can.’

“And that is not just rhetoric. Every class I had him in, he was always well prepared and well informed. He sought out help to improve papers and looked to get the most of every learning experience. His ability to make connections across disciplines is impressive.”

As Schumacher prepared to graduate in May, he started applying for jobs. In the back of his mind, there’s always that urge to go back on the water. Could another expedition happen?

“I still got a lot of living left to do, so hopefully!” Schumacher said, laughing.