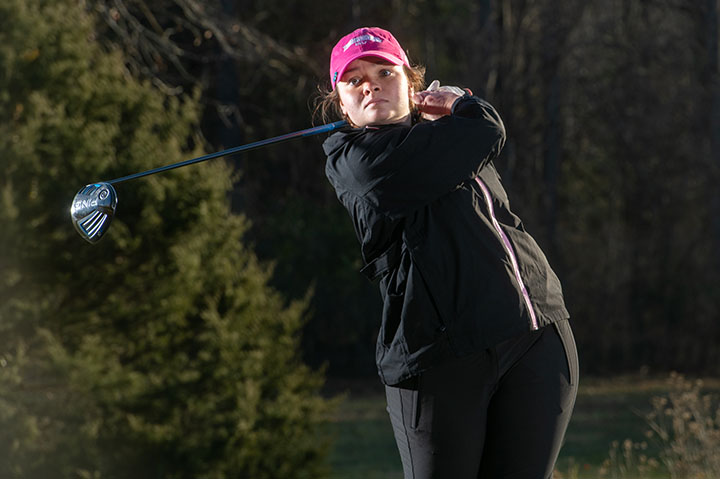 Don’t call it beginner’s luck. In the game of golf, you make your own luck.

But as a newcomer to the collegiate game, University of Lynchburg’s Lily Self ’23 immediately made waves for the Hornets’ new women’s golf program.

After the fall portion of the season, Self led the Old Dominion Athletic Conference in scoring average by more than half a stroke. She won three of the five tournaments the Hornets played.

The Bristol, Tennessee, native said she surprised even herself in her first semester of college-level competition.

“I had some good scores in high school, but I wasn’t very consistent,” Self admitted.

Consistency was the freshman’s calling card in the fall, however. She tied her best-ever competition round with a 1-over-par 73 at Bridgewater College’s Tom Kinder Invitational — one of the tournaments she won — and her 10 rounds all fell between 73 and 82.

“Her demeanor, shot-selection process, mental game, and determination were each impressive in their own right,” Michael Veverka, Lynchburg’s director of men’s and women’s golf, said.

“But out of all those, the mental game stood out the most. She started out well, but it was clear to see that over the semester, she became more comfortable challenging for wins and competing at the top of leaderboards.”

Self seems to have mastered the mental game in the classroom arena, too. 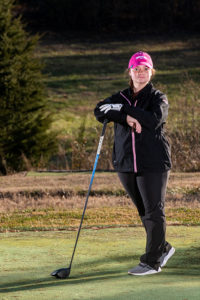 A Westover Honors College student, she carried a GPA of over 3.8 in her first semester, easily reaching the dean’s list. And she did it despite the time constraints of a college golfer’s schedule, with tournaments often falling on weekdays because of golf course availability. Self, a special education major, said she prioritized communication with her professors and classmates to succeed.

“The professors really helped me,” she said, “and students sent me notes.”

After the fall golf season ended in October, she found other ways to maintain her rigorous routine. A horse lover and lifelong rider, Self practiced with Lynchburg’s equestrian team.

While she is unsure if she will compete for the equestrian program, the barn provided another respite from the rigorous academic schedule. It also helped Self focus on being a better teammate, something her coach said she has already mastered.

“Her best attribute is her ability to focus on how her teammates are doing while she is on the course,” Veverka said. “When we come up to her on the course, her first question is to ask how the others are doing. That says quite a bit about who she is.”

The team attribute, Self added, was part of the allure of continuing her golfing career in college. She expects that as the team grows, the camaraderie will as well.

And with their success on the course, an early splash in the world of NCAA Division III golf seems imminent.