/ News / Students examine relationships with tech in ‘Humans vs. Robots’

Clover Leep ’22 got her first cell phone, a “slide phone,” in fourth grade. Destiny Davis ’23 got hers for kindergarten graduation. This spring, the two students examined their relationships with technology as part of a new class at the University of Lynchburg, “Humans vs. Robots: A Survival Guide.”

There are good things about having a smart phone at the ready, Leep said, like using it to stay in touch with friends and family, hail rides, transfer money, and stay organized and in shape. But there are negatives, too.

“It disconnects us from face-to-face interactions,” Leep said. “People are becoming more anti-social and socially awkward because they are missing social cues that are hidden behind the screen while texting. 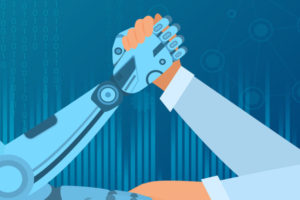 “Phones make you impatient. My phone has caused me to crave instant gratification. If I look something up and it’s not there within 10 seconds, I’m already getting mad.”

Davis agreed. “I believe that we have become too dependent on them and cannot move or function without them,” she said. “It seems as though there is never a time when we are not connected.”

Dr. Paul McClure, assistant professor of sociology at Lynchburg, saw this dependence on technology play out every day while teaching at a private high school several years ago. “Every incoming student was given a brand-new MacBook Pro,” he said.

“I quickly saw that such powerful devices significantly changed classroom dynamics. Students could retrieve information like never before, but their attention spans and social skills were being diminished.

“I’d see rows and rows of students in hallways, glued to their laptops, not talking or even fighting or flirting, which are the typical mainstays of the high school experience. I knew something was changing and eventually decided to research these social developments in depth when I went to graduate school.”

After he came to Lynchburg in 2018, McClure, whose research on technology, religion, and culture has been published by dozens of media outlets, proposed that Humans vs. Robots be added to the DELL General Education Program.

DELL was launched in Fall 2019 to “prepare Lynchburg students for responsible engagement in a complex world,” and Humans vs. Robots seemed a good fit. “I proposed the class based on some of my previous research, which shows that a sizable percentage of Americans are fearful of unemployment due to automation and the rising presence of robots in the workforce,” McClure said.

“College students, and perhaps their parents especially, want to know that the education they’re paying for will result in gainful employment, so this class came out of my desire to address real student concerns, extend my research, and advocate for a liberal arts education as one of the best ways to prepare for the future.”

McClure has a few rules for his class: No phones or laptops. Questions written on index cards instead of via email. An oral final exam. Midway through the semester, he liked what he was seeing.

“I think they love having time away from tech to talk to friends and discuss reading [and] interacting at social events,” he said. “So far, they seem to buy in and understand how the world is changing sociologically because of new digital devices.

“They’re interested in learning some of the skills that can be reclaimed through a liberal arts education and a seminar-style classroom, where discussion and relationships are prioritized.”

During the 16-week course, students also took on the “Phone Abstinence Project.” With their phones off for eight consecutive hours, students completed five tasks, chosen from a list provided by McClure.

Tasks included flirting with someone you like, making small talk with a stranger, writing a hand-written letter, reading a book chapter in one sitting, driving somewhere you’ve never been, having a civil debate with a friend, having a phone-free meal, meditation, and others — all without a phone. The students also had to write a five-page paper about the experience.

By the time the project rolled around, classes had moved online due to the COVID-19 pandemic and students were home. For one of her tasks, Leep decided to drive, sans navigation app, from her home in Baltic, Connecticut, to Plainfield, two towns away.

In Plainfield, there was an area with dirt mounds she wanted to photograph for a cosplay project. To make it more challenging, Leep planned to stay off the highway and take back roads. Her boyfriend, along for the ride, was tasked with remembering important landmarks.

After he forgot to alert her about a particular bridge, Leep missed a turn and things started to go off the rails. “So I turned around [and drove] until I recognized the area again and kept a better lookout for road signs and road names,” Leep wrote in her report. “Eventually, we got there after about 25 minutes. We laughed the entire time because I was taking wrong turns and it was a lot of fun to have him with me on this journey.”

The couple continued the experiment over dinner. “Dinner was weird, at first, because we usually find things to talk about through Facebook or Twitter,” Leep wrote. “We had to watch people in order to find something to talk about. After a while, the conversation started to flow better. I learned that my phone helps me keep conversations going by introducing new topics.”

Leep said she learned a lot about herself during the project, including the importance of “living in the moment and being able to enjoy what I am around rather than numbing myself by staring at a screen for hours. I felt it was important to talk to my loved ones and regain that sort of emotional connection with them because you start to realize after a while that you are losing it.”

Through their papers, McClure also got to know his students better. “The results … were fascinating,” he said. “Of course, some students admitted to feeling an initial wave of panic or uncertainty of how they were going to go an entire day without digital technology, but they also said that once these fears subsided, they were more productive, reflective, or social and relational over the course of the day.

“Some students talked about feeling more ‘alive,’ and still others were thankful that the project enabled them to reclaim activities that had been forgotten in recent years, such as writing a handwritten letter to one’s father, having a game night with family, playing soccer in their backyard, or simply spending time in prayer or meditation.

“Such tasks might seem mundane from the perspective of older generations, but as the digital revolution unfolds and dissolves taken-for-granted pastimes, I think educators must remember that today’s college students are experiencing a different world. And it’s here, I think, where the DELL program comes into play by providing the kinds of skills and lifelong learning habits needed to succeed in a quickly changing world.”