A few years ago, while teaching a Westover Honors Colloquium about Holocaust cinema, University of Lynchburg history professor Dr. Brian Crim had an idea: Maybe he could write a book about how Holocaust imagery and references are used in science fiction and horror films and TV shows — cultural icons like “Star Trek,” “The Twilight Zone,” and the “Star Wars” series.

“I was always interested in how the Holocaust was portrayed in popular culture, especially when it was removed from its historical context,” Crim, who has a PhD in European history, said. “As a scholar of the Holocaust, I was trained to revere the subject and treat it with respect. Many older scholars scoff at the idea of using Holocaust imagery in other genres or fields of study, but I disagreed with that notion. 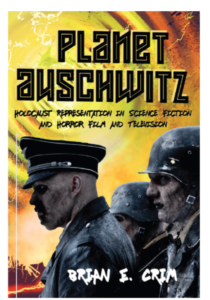 “I think pop culture is a venue with which to interest students and the public about serious topics. While teaching the course, my students and I often would talk about whatever TV shows were on and note the Holocaust themes. I began to include this discussion as a formal part of the course and you could say we looked forward to it as much as, or more than, the assigned films of the week.”

What resulted from these conversations was “Planet Auschwitz: Holocaust Representation in Science Fiction and Horror Film and Television,” which will be released by Rutgers University Press in May.

“The Holocaust is the benchmark for horror in the modern world,” Crim said. “Nothing a horror writer or director can imagine approximates the real horror of genocide. As I write in the book, some films are what I call ‘Nazisploitation’ — cheap, crass, unethical — and others … are rather intelligent and earnest attempts to grapple with the topic.

“I think both can teach us much about how the memory of the Holocaust has evolved since the end of World War II.”

In his book, Crim writes about popular movies and TV shows that used Holocaust themes in subtle and obvious ways — recent TV shows like “The Walking Dead” and the HBO series “Westworld,” as well as classic movies like “Rosemary’s Baby,” “The Shining,” “The Exorcist,” “The Boys from Brazil,” and even “Psycho.”

“Alfred Hitchcock actually edited the footage from the liberation of concentration camps and he was so shaken by it he missed work for a week — very unlike him,” Crim said. “His obsession with the peephole and, of course, the famous shower scene in ‘Psycho’ are a direct result of this trauma.” 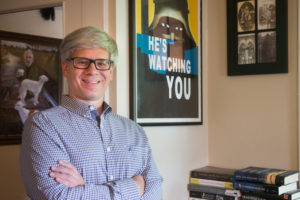 Crim said he also included a lot of “forgettable films” in his book — “Zombie Lake,” “Frankenstein’s Army,” “Ilsa: She Wolf of the SS” — because “they reveal how easy it is to exploit the Holocaust for commercial success.”

Hollywood’s interest in Holocaust themes appears to have been sparked by the 1961 war crimes trial of “final solution” architect Adolf Eichmann. “It became fashionable in the ’60s and ’70s for networks and film studios to ‘resurrect’ the Nazi enemy, especially in horror and science fiction,” Crim said.

“Part of this was the result of the international media circus surrounding the Adolf Eichmann trial and the testimony of survivors. There was also a wave of ‘Hitler scholarship’ that fascinated Americans especially. Shows like ‘The Twilight Zone,’ ‘Star Trek,’ and then ‘Star Wars’ either explored stories with real Nazis or invented galactic Nazis.

“What’s fascinating about ‘Star Wars’ is George Lucas purposefully used fascist aesthetics because he studied Nazi films in film school, specifically Leni Riefenstahl’s ‘Triumph of the Will.’ Lucas liked the pageantry but not the politics, obviously. He modeled the politics of ‘Star Wars’ more on post-Watergate America than the Third Reich.”

Crim, whose doctoral work focused on post-World War I anti-Semitism in the German army and its veterans, also includes films in “Planet Auschwitz” that were made during the lead-up to the Holocaust and World War II.

“I write about films from the Weimar period, 1919 to 1933, such as ‘Nosferatu,’ ‘Metropolis,’ and ‘The Golem,’ because they foreshadow Nazi films with deeply anti-Semitic themes,” he said.

In the acknowledgments for “Planet Auschwitz,” Crim gives a shoutout to his Lynchburg students and the Westover Honors College. He also dedicated the book to his aunt, a Smithsonian film producer who died in 2019.

“[She] had a great influence on my love of film,” Crim said. “I’m also a pop-culture junkie, which any of my students will tell you, so I tried to make it part of my scholarship.”