On Saturday, September 21, the Westover Honors College held its annual induction ceremony, where 67 students officially became a part of the College and the Society of Westover Fellows.

Dr. Beth Savage, assistant director of the College, talked about how, in such a short amount of time, the students have grown and have already learned that no matter your age, “All of us are always learning; the learning never stops, and we are students for our entire lives.”

Lynchburg’s provost, Dr. Allison Jablonski, addressed the “Freshtovers” (a nickname for freshman Westovers), giving them an English lesson on words that end in -over. She described the general character of Westovers by comparing them to a pushover.

“This is a person who is easy to overcome or influence,” she said. “Westovers are strong; they stand up for their beliefs. They are often leaders on campus, in their careers, and they blaze trails as they encounter the world. Westovers are not pushovers, even when college gets tough.”

“Westovers are strong; they stand up for their beliefs. … They blaze trails as they encounter the world.”

During the ceremony, Madison Rechenberg ’20, president of the Westover Honors Executive Board, invited the new students to step outside of their comfort zones during their time at Lynchburg, while also understanding their own personal limits.

Initially, Rechenberg said she planned to play soccer for all four years of college, but she stopped, realizing that what she wanted had changed. “Saying ‘Why not?’ when someone prompts you with an opportunity that you’ve never had before will allow you to do many new things,” she said. “While this is fun, it is extremely important to learn when and how to say ‘No.’

“Look for the chance to close some doors that you have been too comfortable leaving open, so that you can open your eyes to the many doors that may just be right in front of you.” 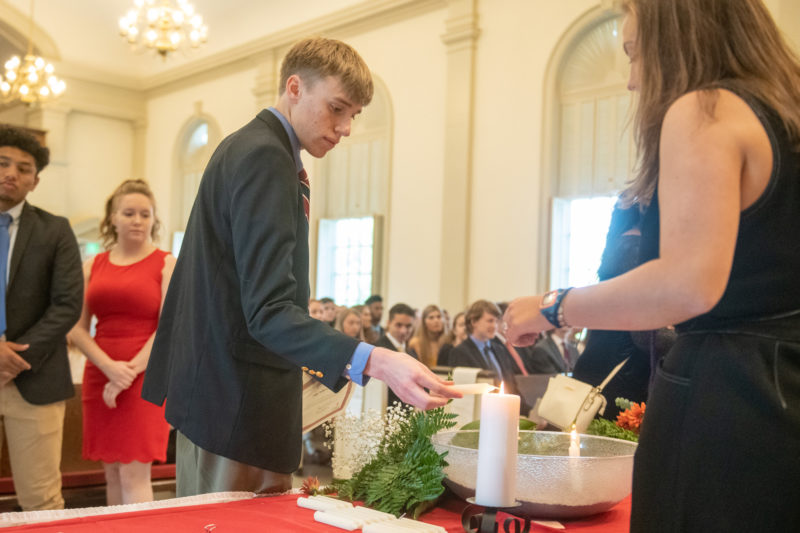 Keeping with tradition, one of the inductees, Madison Ayres ’23, spoke at the ceremony. Ayres, a Greensboro, North Carolina, resident and communication studies major, talked about what makes the Westover program unique in delivering its educational experience to its students.

“Even though we’re in a rigorous program, there isn’t a cut-throat feeling to it,” she said. “There’s a mutual understanding that we’re all trying to succeed in college, especially just getting through our first semester as college students.”

“Look for the chance to close some doors that you have been too comfortable leaving open, so that you can open your eyes to the many doors that may just be right in front of you.”