On the Thursday afternoon before Halloween, three teams of Doctor of Physical Therapy students from the University of Lynchburg were putting the final touches on their costumes: Minnie Mouse, Captain America, and Mario of “Super Mario Bros.” fame.

“Costumes” might be a bit of a misnomer, however. These were way more than costumes.

Over the past five weeks, the students made Halloween costumes for area children who use wheelchairs to get around. It was all part of Hallowheels, a fundraiser for Children’s Assistive Technology Service (CATS), a nonprofit that provides gently used wheelchairs and other medical devices to kids across Central Virginia at no cost.

“Almost every child loves dressing up for Halloween,” Carrie Cheung ’21 DPT said. “Deciding who they want to be, picking out the costume, and going trick-or-treating are memories that will stay with them forever. That feeling of joy and excitement throughout the process should not fall short simply because they don’t have accessible costumes at the stores.”

The basic rules of the Hallowheels competition, which drew teams from colleges and organizations across central and southwest Virginia, include that costumes need to fit over a wheelchair. They also must be able to be removed quickly, in case of a medical emergency.

Teams have $200, donated by a local business sponsor, to use to make the costumes. F. Read Hopkins Pediatric Associates, Virginia Prosthetics and Orthotics, and Suburban Propane sponsored the Lynchburg DPT teams.

Before they started building the costumes, the students met for several hours with the kids and their parents. “During the meet and greet a month ago, our DPT students got to learn about these children and their mobility needs,” Dr. Anissa Davis, assistant professor in the College of Health Sciences, said. “But more importantly, that they love Halloween and are excited to be characters, like Mario and Minnie Mouse.” 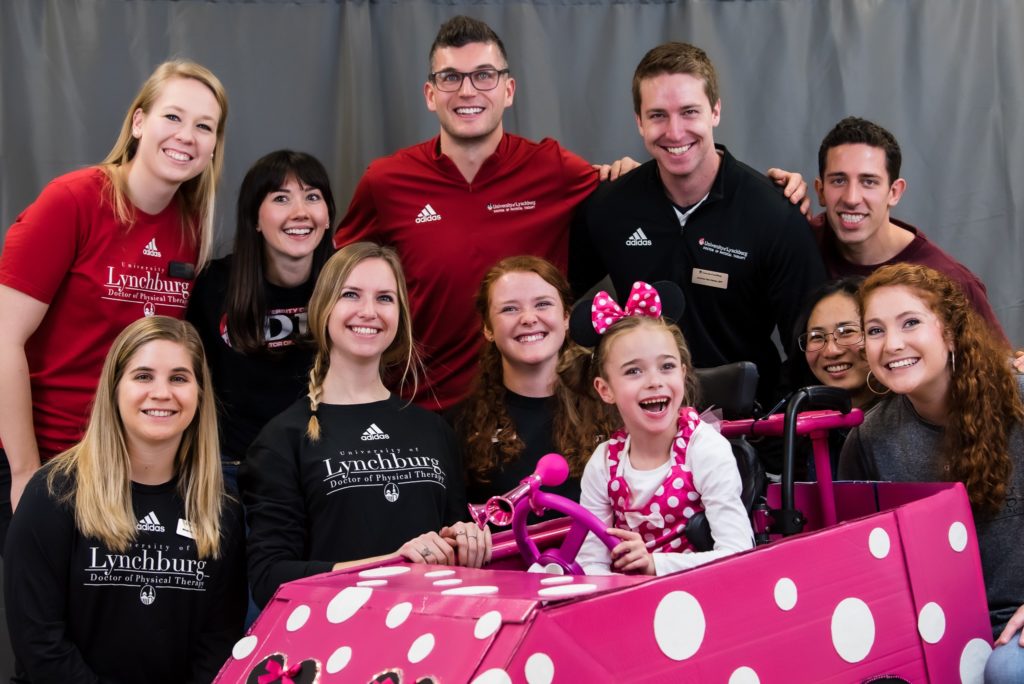 One team of students made a pink polka-dotted Minnie Mouse car for 6-year-old girl, complete with sparkly Minnie Mouse-shaped hubcaps and working headlights. The frame was made of PVC pipe, spray painted hot pink and affixed to the cardboard exterior of the car with duct tape.

The car also featured a license plate with the girl’s name spelled out in stick-on purple bling with a pink tulle bow. As one might imagine, hot glue was a key part of the project. “A whole lot of hot glue,” Audrey Ferguson ’22 said. “Probably more than we should have.” 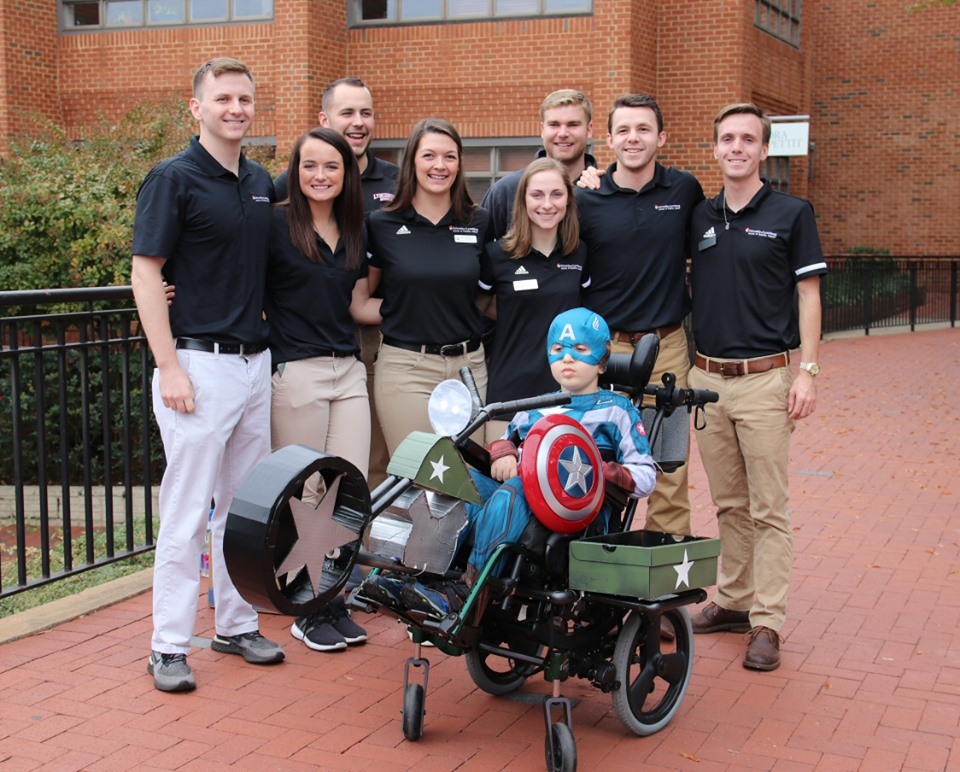 For the Captain America costume, the team made an Army-green chopper with saddlebags ready for candy. Because the 11-year-old boy who would wear the costume uses a wheelchair that tilts backward, the team thought a chopper was a good idea. As one team member put it, it makes it look like he’s doing a wheelie.

The Mario team appropriately made a kart — in the style of Nintendo’s “Mario Kart” video game — for a 4-year-old boy they described as a “huge Mario fan.” Among other features, the kart had flaming “power boosters,” crafted from a pair of mini, fake Olympic torches, and headlights made from battery-operated closet lights.

A fidget spinner was an integral component of the steering wheel and the entire outside of the kart was covered in felt, including a big red “M” that was glued to the hood. “There were a lot of crafty people,” Ashley LeMay ’21 DPT said of her team.

Team member Emily Maxwell ’21 DPT agreed, saying Hallowheels gave her and the other students an opportunity to use “a different side of your brain.” It also reinforced the reason they’re studying physical therapy in the first place.

“Hallowheels … gives us the opportunity to step away from the books, the facts, and the studying and remember what drives our love for physical therapy,” she said. “It’s a profession about empowering individuals in their passions and wellbeing through personal interactions.

“I’m grateful to be able to play a part in sharing the experience of Halloween and empowering kids through their smiles, laughter, and memories.” 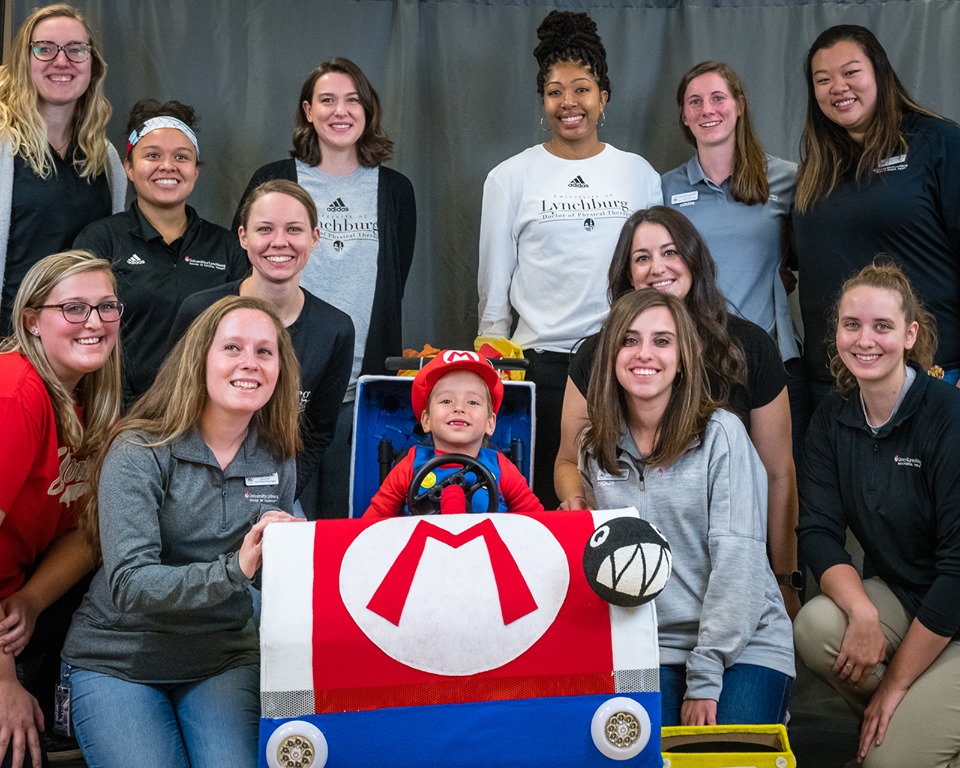 Saturday, October 26, was the “big reveal,” when the kids finally got to see and try on their costumes. It was immediately obvious to Lauren Tressler ’21 DPT and her team that they’d hit it out of the ballpark with their Mario kart.

“He was so excited,” she said. “We hid his Mario kart behind a screen and when he first saw it, he said, ‘Whoa!’ His next question was, ‘This is mine?’ The joy on his face was very evident. When we got him in his costume and in his kart he kept saying, ‘Hey, it’s me, Mario!’ He is the cutest. It definitely made the long hours worth it.”

Hallowheels winners are decided by online voting — one dollar equals one vote — via the CATS website. Winners get a trophy and snacks, but that’s not the main motivator for the DPT students.

“I got into Hallowheels because I wanted to make someone’s Halloween,” Tressler said. “I know it’s sometimes difficult for those with adaptive technology to fit in and feel like everyone else, which is important when you are young. So, if I can help make a kid’s day, then I’m going to do so.”

Cheung added, “I joined Hallowheels because, simply put, I want the children to be children. I want them to be able to pick out a costume, go trick-or-treating, and smile from the inside out because they got to be part of an event with other children without judgment.

Davis hopes her students will take what they’ve learned through Hallowheels with them after graduating from the DPT program and starting their careers. “We teach our Doctor of Physical Therapy students to see the person, not the ‘diagnosis,’ and this activity really brings that concept home,” she said.

“I think Hallowheels teaches future physical therapists to bring creativity and a ‘think outside the box’ perspective to their patient care. The way kids light up when they see these costumes says it all.”

Online voting for Hallowheels runs through noon on November 3. To see all of the costumes and vote, visit CATS’s website.