/ News / Teacher of the Year finalist: Teaching is ‘where I’m supposed to be’

Amy Mallow ’02 didn’t suspect anything when her principal texted her one night to say she had called a “data meeting” at 9:15 the next morning.

Mallow, a second grade teacher at Huddleston Elementary School in Bedford County, Virginia, has a new position at the school, where she works with data to help kids who are struggling. “I’m data driven, I live for data,” she said. 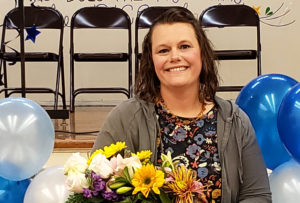 She texted back, “OK, no problem,” but when she arrived at the “meeting,” she found the entire school and a TV news crew were there. That’s when she learned she is Virginia’s Region 5 Teacher of the Year, making her a finalist for the 2020 statewide award.

“I was shocked,” Mallow said. “It’s a huge honor, completely unexpected. There are so many people who are good teachers and it is really a big honor to be chosen to represent the region because I’m sure that there’s somebody out there who’s better than me. I just happened to be chosen this time.

Mallow, who has a bachelor’s degree in child development from Lynchburg, got into teaching honestly, so to speak. Her mother, father, and stepmother are all teachers. “I saw what good teaching looks like, what dedicated teachers did and how hard it was,” she said. “Late nights and grading papers and lesson planning. … I saw what they had to put into their work.”

Her first grade teacher, Miss Barbara Bias, inspired her, too. Miss Bias had a “beehive” hairdo and was “always enthusiastic,” Mallow said. “She challenged us every day. The work was not easy — it was high-caliber work — and she expected quality. Her expectations were high and she was excited about being at the school.”

While Mallow said, “part of me said I’d love to do that,’ she initially majored in business and Spanish at Lynchburg College. As she went down that path, however, she started thinking, “This is not what I want for my life. I don’t want to crunch numbers or sit in a cubicle. I have to talk and be around other people.”

She decided she wanted to be a teacher and told her parents, who weren’t at all surprised. “They said, ‘We knew it. We knew you were going to be a teacher,’” Mallow said. “My stepmom is pretty supportive and she said, ‘We knew, when you were 7, 8, 9 years old, when you were lining up your teddy bears and making them flashcards on your bed at night. We knew. Don’t fight it. Do it and love it. Put your whole heart into it because that’s what the kids need.’

“That’s when I started and I’ve been loving it ever since.”