If the Apollo 11 astronauts had run into major trouble shortly after launching toward the moon, they could have returned safely to Earth, thanks in part to a young mathematician named Kenneth Garren.

Now president of the University of Lynchburg, Dr. Garren worked in the Apollo program for five years in the 1960s. One of his projects involved co-writing a document describing how the astronauts could eject their command module from the rocket engines, steer the ship so its heat shield faced Earth’s blistering atmosphere, and descend without burning up.

Apollo 11 astronaut Buzz Aldrin signed a copy of that report for Garren and added, “Glad we didn’t need to use this.” 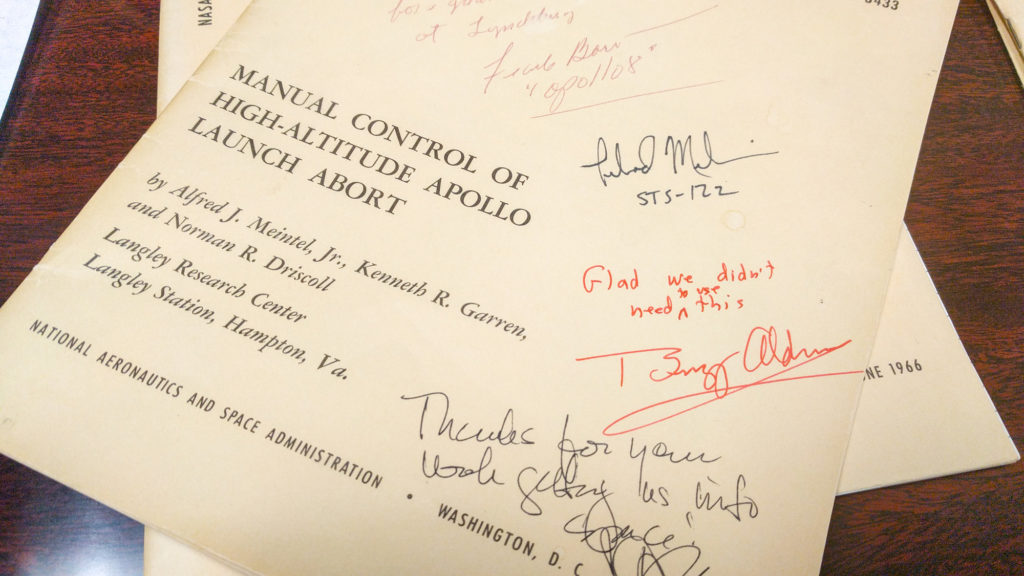 With the 50th anniversary of man’s first steps on the moon approaching, Garren shared a few memories about working for NASA during the space race. In 1961, he was finishing his bachelor’s degree in mathematics when U.S. President John F. Kennedy challenged Congress to increase space program spending and land a man on the moon before the decade was over.

That idea appealed to Garren’s natural curiosity and desire to explore. That summer, he was one of more than 200 engineers hired to work at Langley Research Center. He considers himself lucky for finishing his mathematics degree just as NASA was expanding. “I just happened to be in the right place at the right time,” he said in a recent interview.

Not long after Garren started at NASA, Kennedy gave his famous speech about the lunar goal. “We choose to go to the moon in this decade and do the other things not because they are easy, but because they are hard,” Kennedy said in September 1961, “because that goal will serve to organize and measure the best of our energies and skills.”

Those words galvanized Garren and his NASA colleagues. “I loved this talk. It was inspiring for me to hear that,” he said. “We were in a race with the Russians. They had Sputnik and the first man in space. They were ahead of us, and the U.S. was really fighting hard to put the first man on the moon.”

Garren worked alongside engineers and rubbed shoulders with astronauts. His mathematical analysis and knowledge of physics helped the space agency with a variety of projects including developing a procedure to detect distant objects in space, for which he was given a NASA award.

There were also “other duties as assigned,” such as when a psychologist on staff asked Garren to help with an experiment. His role was to lie down on a spinning disk and press controls overhead that would change the direction of the spinning. The idea was to see how a person reacted in a simulated gravity environment.

“After about 10 minutes I said, ‘You need to stop this. I’m getting sick,’” Garren said. “Then I asked them what was the purpose of the experiment. The answer was, ‘To see how long it took you to get sick.’”

Garren had dreamed of entering the astronaut program himself, but the experiment convinced him spaceflight would not be for him. “I think I’d rather keep my feet on the ground,” he said.

His work at NASA taught him another lesson: His favorite part of the job was not crunching numbers, but interacting with his colleagues. He had taught summer school classes at his alma mater, Roanoke College, just before joining NASA, and he decided he would like to teach full time.

He finished a master’s degree at the College of William & Mary while working at Langley. In 1967, he left NASA to finish his PhD at Virginia Tech. He was a Roanoke College professor on July 20, 1969, when he turned on the TV to watch the broadcast of Neil Armstrong stepping down onto the moon’s surface.

“It was hard to believe it was happening,” Garren said. “It was just exciting. They actually were doing it.”

He said he was proud of what the science community had accomplished together and glad that he had played a role in it. “I was just lucky,” he said. “I happened to have done well in my science and math and got hired in NASA. I just happened to be working with people who were experienced. I was the rookie, but I was able to make contributions, so that felt good.”