Freelance television producer Ted Duvall ’83 was at Lynchburg recently talking with history students about how he leveraged his history degree into a career in the TV industry.

Duvall said when he first arrived at Lynchburg, he had hopes of becoming a large animal veterinarian. Those dreams changed, however, when he failed his first chemistry lab and realized the sciences were not his calling. 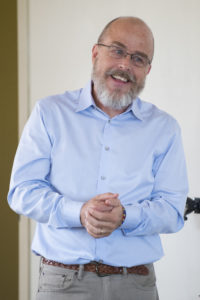 After talking to his father, a journalist who had majored in the humanities, Duvall changed his major to history. As a history major, he refined his writing and research skills and learned the importance of time management and deadlines.

He later discovered that doing homework and reaching academic goals translated into the television industry. “As long as you show up to work and are nice, you’ll thrive in the business,” Duvall told the students. “If you’re aggressive, you’ll thrive even more.”

Since graduating from Lynchburg, Duvall has produced shows for ABC, NBC, The Discovery Channel, ESPN, HGTV, and other channels. While working on Battlefield Diaries, a Discovery Channel series about firsthand accounts of war, Duvall’s history degree came in particularly handy.

For the series, he wrote scripts for the narrator and compiled different video clips to tell the soldiers’ stories. “Making a documentary is like [writing] a history thesis, except, in college, you don’t have an assistant, crew, or boss,” Duvall said. “But you still have to go to the library and do research.”

Overall, Duvall summarizes his job as getting paid to do fun things, and he compares it to his father’s career in journalism. “I never intended to a be a journalist like my father,” he said. “However, this line of work is great.”

In addition to the history seminar, Duvall visited communication studies classes to talk about journalism and video production.