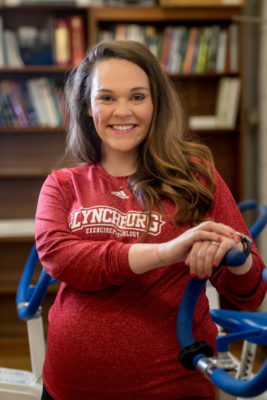 Anderson is a junior studying exercise physiology at the University of Lynchburg. She’s also an Army National Guard medic.

She joined the military when she was 17 years old. She has deployed to Iraq, Qatar, and other countries with the National Guard.

Anderson has enjoyed expanding her academics at Lynchburg. She especially likes how the staff is friendly and tight-knit. “I have had several military events that have taken me out of school. The professors were understanding and helpful in making up my work.” she said.

On Saturday, Anderson and her family were celebrating her grandfather’s 80th birthday at the Crown Sterling restaurant in Lynchburg. A man at a nearby table lost consciousness. When it was apparent that the man was not breathing she jumped in to help. Finding that the man did not have a pulse, Anderson started CPR compressions. Soon, the man started to regain consciousness.

This scare has helped to bring about positive changes as well. The restaurant owner decided to install Automated External Defibrillators and have all of her staff CPR trained so they, like Anderson, can help when necessary.

“Being trained in CPR is very helpful,” Anderson said. “You never know when you will be put in a situation and need to be prepared to help.”

Anderson was featured in a “Heroes in the Heart of Virginia” feature story on ABC 13 on Monday. Watch the story here.