Two art exhibits will open Monday, January 28, in the University of Lynchburg’s Daura Gallery. Both are made up of recent purchases by the Friends of the Daura Gallery that will become part of the gallery’s permanent collection.

“In Memory of My Feelings: Artists’ Homage to Frank O’Hara” features artwork that celebrates the work of Frank O’Hara, a poet and art critic who was active in the mid-20th century. The exhibit was co-curated by Dr. Chidsey Dickson, an English professor at Lynchburg. Dr. Dickson also will speak at an opening reception for the two exhibits to be held from 4 to 6 p.m. Admission is free and the public is invited. 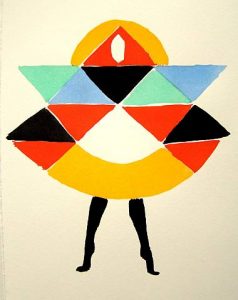 The second exhibit, “Freedom, Fashion, Art,” is comprised of 28 art and fashion plates created by Ukrainian-born artist Sonia Delaunay. Delaunay, who spent much of her life in Paris, was an illustrator, painter, and textile designer. She also has been described as a “pioneer of abstract art” in the pre-World War I period.

“Sonia Delaunay is an important 20th-century artist, also known as Sonia Delaunay-Terk, who was among a group of avant-garde artists working in Paris in the early-mid 20th century,” Dr. Barbara Rothermel, director of the Daura Gallery, said. “She was a modernist whose work reflects the speed and mechanization of the modern world achieved through dynamic color theory.”

The Delaunay pieces were described by Dr. Rothermel as “porchoir prints.” Porchoir — French for “stencil” — is defined by Britannica.com as “a highly refined technique of making fine limited editions of stencil prints. It is often called hand colouring, or hand illustration.”

For the exhibit, Savannah Bower, costume shop supervisor at Lynchburg, made a dress inspired by one of Delaunay’s designs. “I always look for opportunities to collaborate with other academic programs and this was one in which we could again work with the theatre department and costume designer Savannah Bower,” Dr. Rothermel said.

Before she was approached about making a dress for the exhibit, Bower wasn’t familiar with Delaunay’s work. After doing some research, she came to appreciate it. “I find her work to be instrumental for future fashions, especially for the 60s,” Bower said. “By combining the bright colors and geometric patterns, she influenced future designers and made a huge impact on the standards for modern designers.”

The dress, which will be displayed with the exhibit, is constructed of a medium-green velvet fabric and a black-and-white-striped knit. “Sonia designed her own fabrics as well — produced her own fabrics — so I am using a velvet and a knit, which were available in the 1920,” Bower said in December.

“I think she actually made her own fabric for this dress. I’m having a lot of fun. It’s very difficult — lining up those points is hard — but it’s been a lot of fun and I hope that the finished product comes out as good as Sonia Delaunay’s drawing.”

Bower, who has a Bachelor of Fine Arts in technical theater, has managed Lynchburg’s costume shop since 2015. For each production, she supervises a team of student workers who help her build costumes. “I have four student workers and sometimes volunteers as well,” Bower said. “Each student worker gets to build a costume and then I build a costume. … We build at least five articles per show. At least. For Peter and the Starcatcher, we built close to 20 things.

“A lot of times students come in knowing a very limited amount of information. We teach them how to thread machines, hand sewing, surging, how to read a pattern, anything. My goal is, by the time they get ready to graduate and leave here, for them to be able to apply for a theater costume position and feel confident doing that.”

After being displayed with the art show, Bower’s homage to Delaunay will be stored in the costume shop for use in future productions. “Afterwards, it will go into stock and hopefully be used in a show,” Bower said. “We do a lot of shows set in the 1920s. This would be a fun costume to go on stage.”