The novelist Jessie van Eerden will open the University of Lynchburg’s Fall 2018 Thornton Reading series at 7:30 p.m. Thursday, September 27, in Schewel Hall’s Sydnor Performance Hall. The reading is free and open to the public. A book signing will follow.

Van Eerden, a West Virginia native, holds a Bachelor of Arts in English from West Virginia University and a Master of Fine Arts in nonfiction writing from the University of Iowa. As an associate professor of English, she directs the low-residency MFA writing program at West Virginia Wesleyan College. 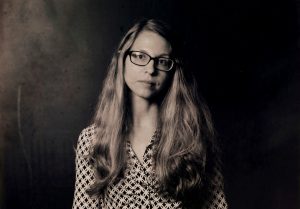 Lynchburg’s English faculty selected van Eerden based on a recommendation and review of her work. Dr. Richard Burke, an English professor who oversees the Thornton Reading program, said the department looks for authors who can read their work in an engaging way before an audience.

“A good reader breathes life into her words, making the text more energetic, more vital, and more entertaining,” he said. “She should be very good at this.”

Van Eerden is the author of the award-winning 2012 novel Glorybound, a story of faith, family, and reconciliation set in a small Appalachian town. Her second novel, My Radio Radio, was published in 2016. An essay collection by van Eerden, The Long Weeping, won the 20th-annual Foreword INDIES Book of the Year Award in the essay category.

At Lynchburg, van Eerden will read a new short story.

“Van Eerden will be answering questions from the audience about her work, so anyone who attends can get her insights into anything they’ve been wanting to know about her work — or anything that has piqued their curiosity during the reading,” Dr. Burke said.

Jer Bryant, English instructor and director of the Wilmer Writing Center at Lynchburg, studied under van Eerden while pursuing his Master of Fine Arts at West Virginia Wesleyan. “Jessie’s essays are multi-dimensional,” he said. “Somehow, Jessie digs down deep, exploring the spiritual, the universal, and the personal.

“What she brings forth is a piece that weaves all of these realities into one essay that speaks to many. Her works are never selfish; they are not self-indulgent. Rather, they provoke a response in the reader, asking them to ponder and to feel.”