/ News / Finding the root cause of a plant’s slow growth 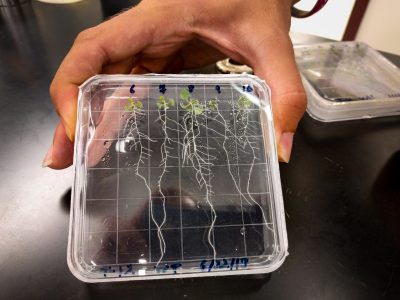 Every day, he drove from his home in Appomattox to Lynchburg to measure the roots shooting out from the plant. His short term goal is to find out whether certain genes cause the plant to grow more slowly. The long term goal is a bigger: crops that yield more seeds with more oil that can be used for fuel.

They collaborate with Virginia Tech scientists, who want to develop crops that have more oil in the seeds, which is useful for biofuel production. More oil per seed means more clean energy per acre. But it’s important to understand any trade-offs that exist with the genes that cause more oil production — such as slower growth.

That’s where Phillips comes in.

He joined Dr. Friedman’s team because he enjoyed a plant genetics lab during his freshman year. At first, he simply followed directions, but he soon showed creativity and initiative. “Colby’s gone from ‘tell me what to do,’ to, ‘Hey, I noticed something, can I test this?’” said Dr. Friedman. “Most of his experiments are his idea. He’s really made it his own, and he’s truly interested in it.”

Phillips gave Dr. Friedman credit for his budding independence. “I often go to her with problems, and instead of solving the problems for me, she gets me on the course of solving them myself,” he said.

Earlier, Phillips noticed that plants grew differently depending on their location in the growth chamber — a refrigerator-sized, electrically powered plan incubator. So he proposed and conducted a project to find out how light intensity impacted the plants.

Then, Phillips noticed that one of the Arabidopsis strains the team studies, with a gene called VAL1, progressed more slowly than other strains. It produced a stem later, and it also flowered later. Phillips wanted to get to the root of the issue.

“I wondered if there was any variation early on in the life of this plant,” he said. “We are seeing whether VAL1 has slower root growth.”

Phillips received a $2,000 grant from the Virginia Foundation for Independent Colleges to pay for the research. He purchased a supply of small plastic boxes with rulers in them to grow several strains of Arabidopsis.

His research showed an obvious difference in the growth rates of roots in the Val 1 strain of Arabidopsis thaliana. Dr. Nancy Cowden helped him analyze the roots themselves to see what kinds of cells, such as water-absorbing cells, were most common in the roots. Understanding the root differences could help understand how the Val1 gene impacts other species of plants.

With one question out of the way, Phillips has another question: Is there something that happens before the roots grow that could cause the slow development? He will work with Dr. Friedman and Dr. Cowden to examine the embryonic tissue of a germinated seed with the VAL1 gene.

When that project is done, he is certain to have another question.

He said he enjoys working on his own research because it requires creative, critical thinking. It’s more than a lab experiment, but it’s a way to find greater knowledge. Dr. Friedman said she wants all of her students to catch that vision of science.

“That’s the essence of science,” Dr. Friedman said. “It’s not just a bunch of information. It’s questions to follow, and a process you use to answer those questions. That’s what makes science so exciting. There’s always something new to learn.”