About 150 members of the University of Lynchburg community gathered Monday morning to celebrate the institution’s evolution to a university.

It was the first business day as University of Lynchburg, something that President Kenneth R. Garren said is a matter of “truth in advertising.”

“Last week, we were a university that called itself a college,” Dr. Garren said. “This week we are still a university, but we now … open our doors using a name that properly describes the breadth and depth of our academic programs.” 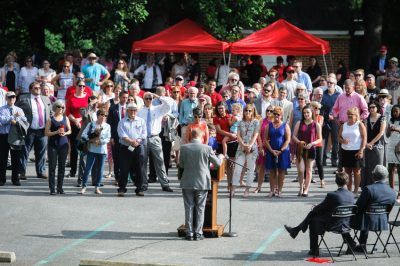 Dr. Garren shared points in the University’s history that underscored its evolution from a small college, including the growth of its graduate programs, pointing out that more than 40 percent of 2018 graduates were receiving master’s and doctoral degrees. While this defines the institution as a University, market research about the potential name change revealed that prospective students and their parents preferred the University name. The Board of Trustees approved the name “University of Lynchburg” in 2017.

“By ensuring that our brand reflects our true identity, the University of Lynchburg will attract the right-fit students — at the undergraduate and graduate levels, domestically and internationally — to thrive in what has become an extremely competitive academic marketplace,” Dr. Garren said.

Nat Marshall ’83, chair of the Board of Trustees, described the place that the University has had in the Lynchburg community. He cited partnerships with local organizations and the University’s significant impact in the local educational community.

“Great cities have great universities that share a name,” he said. When the Board considered the name change, “other names were suggested but we stuck with Lynchburg because of our history and because of our close ties that we have with our city,” he said.

For the past several weeks, red banners proclaiming, “Same place, new name,” hung over the entrance signs that once said “Lynchburg College.” After their remarks, Dr. Garren and Marshall removed those banners to reveal the new University of Lynchburg sign.

Dr. Garren’s and Marshall’s speech texts are below:

Good morning, everyone. It is possible to identify several significant events in the academic evolution of this beloved institution in the name change from college to university.

Last week, we were a university that called itself a college. This week we are still a university but we now hereby call ourselves a university. We open our doors using a name that properly describes the breadth and depth of our academic programs, thus the name of the University of Lynchburg. 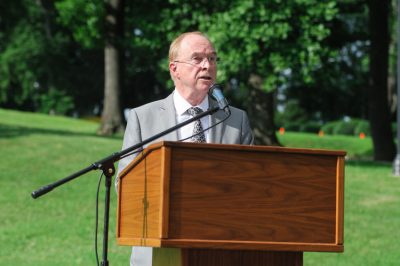 It is really a matter of truth in advertising, and it most definitely did not happen overnight.

The first significant event towards becoming a university occurred in 1964 during the presidency of Dr. Carey Brewer. This was the year Lynchburg College’s first master’s degree program was initiated.

Another significant event happened at a Board retreat held at Smith Mountain Lake in 2007 under the leadership of Board Chair, Mr. Andrew Larsen. At that point, the Board of Trustees set the direction of the academic compass with the decision that we needed to pursue creating nationally needed health science programs at the graduate level. Thus began the program of the Doctor of Physical Therapy.

For generations, we have offered graduate programs in education. Today, our College of Education, Leadership Studies, and Counseling offers a full complement of certificates, master’s and doctoral degrees.

Similarly, we have offered the Master of Business Administration degree for 50 years. We have been training leaders in business, industry, and local government for decades. Recently, we added an online option. That means a University of Lynchburg MBA is now available here and across the globe. 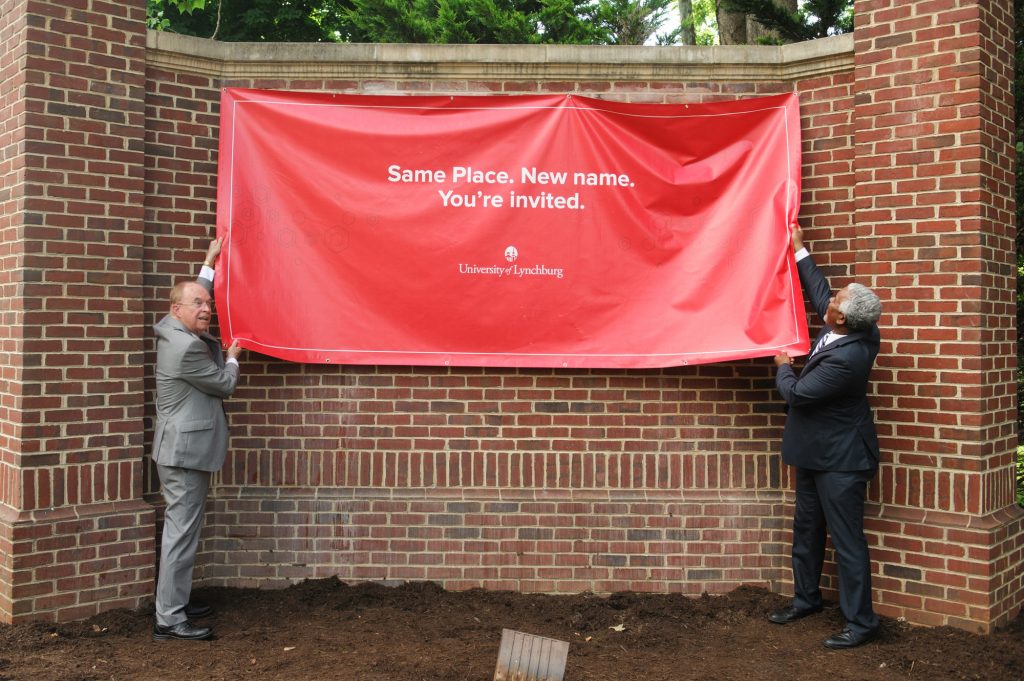 Also due to innovative use of technology by our nursing faculty, our Nursing Program was recently recognized by the Apple Corporation as a “Distinguished School” – one of only two nursing programs in the entire United States to be so recognized. Indeed, the University of Lynchburg has become a national leader in health sciences education.

We have also received national recognition by U.S. News, the Princeton Review, the Wall Street Journal and are among only 40 institutions in the entire United States to be included in the inspirational book “Colleges that Change Lives” authored by a former educational editor of the New York Times.

In researching the possibility of a name change several years ago, an external researcher determined that prospective students and their families, when planning for higher education, would consider by nearly a 3 to 1 margin in favor of enrolling in a university rather than a college.

Our strategic plan, Vision 2020, details an overriding aspiration to become nationally recognized as a leader for student engagement in the classroom, in athletics, and in leadership. We shall strengthen the undergraduate program with active learning and improved facilities while strategic growing graduate programs. 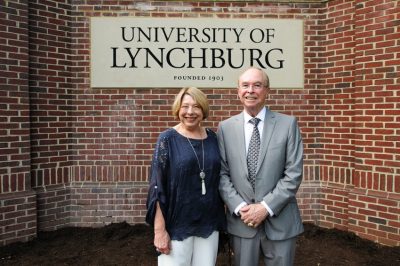 Another significant event happened on April 7, 2015:  That was when the Strategic Planning Team made up of 18 distinguished faculty and staff leaders brought to me a recommendation that for the future strength of Lynchburg College that this institution should formerly change its name to “university” and that I should take this recommendation to the Board of Trustees. After this recommendation was presented to the Board, the administration was then instructed to conduct a thorough study and provide the results of this study to the Board.

The final significant event occurred on February 24, 2017 under the leadership of Board Chair, Dr. Polly Flint, when the decision was made to include “university” in this institution’s name by the Fall of 2018. Achieving this milestone took tremendous strength of this Board to achieve. Thank you Dr. Flint and the Board of Trustees for your determination to do what was in the best interest for the future strength of this institution.

Over the past year, we have been working to re-brand Lynchburg College into the University of Lynchburg with this work ably led by Associate VP Michael Jones, the Director of Communications and Marketing. We took a long and careful look at who we are as a community of learners and examined the three pillars of what we stand for: Learning, Balance, and Community.

Learning: focuses on academic offering & the powerful nature of our student and faculty relationships
Balance: some schools focus on the transformative nature of the campus experience; others focus on the changes that their graduates will bring about. We will balance both developing good souls push for a better humankind
Community: our communities are defined by student growth and pride. Our love for this university comes in part we and what we have to offer the world.

We reaffirmed our institutional personality traits  – “loving,” “empowered,” and “focused.”

We crafted a “brand promise,” key messages for our target audiences, and a brand strategy that pulls it all together and of course there have been many signs to change. In addition to getting all of our signs changed, Mike Jones has worked with his team of faculty, staff, students, and parent (Ms. Kathy Kowalski of Richmond), in developing those key messages and they will appear in all of our future student recruitment materials and other university materials.

By ensuring that our brand reflects our true identity, the University of Lynchburg will attract the right-fit students — at the undergraduate and graduate levels, domestically and internationally — to thrive in what has become an extremely competitive academic marketplace.

Lynchburg College has long been a first-choice institution for talented students and distinguished faculty from throughout Virginia, across the country, and around the world. We have been known as a traditional small liberal arts college. Today, we admit to being more, namely as a university, grounded in the liberal arts (the most important elements of their education) and diversified (diversity in all matters as a major strength) in preparing our students to face their future. That is what we will continue to do. We will focus on preparing our students for success in their future.

Welcome, everyone, to the University of Lynchburg. 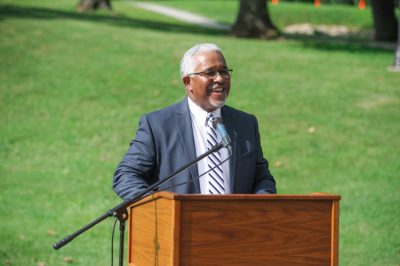 As Dr. Garren said, I’ve lived in this neighborhood for 25 years and I am an alumnus of Lynchburg College. I’ve watched Lynchburg College evolve from a small, southern college, with little recognition outside of central Virginia, to a university with alumni, students, and partnerships all over the world.

One reason for this evolution is that we’ve been good neighbors, both at home and abroad. We’ve been god neighbors and community partners in Central Virginia and beyond for more than a century.

Our growth in graduate programs, particularly in the College of Health Sciences, has been fueled by the needs of our community and our region.

Our partnership with Centra is but one example of this.

At the Centra Central Virginia Center for Simulation and Visual Learning, our nursing students learn what it’s like to work with real patients in a hospital or clinical setting.

Many of these nursing students, along with our physical therapists, physician assistants and other health sciences graduates, stay here in the Lynchburg area after they graduate. They work in our local hospitals and clinics, raise families, and enrich the community.

Leaders in business and industry are Lynchburg alumni as are many of those working in local government.

You’d be hard pressed to find a school or school district in the city or region — perhaps the entire Commonwealth — that doesn’t employ a number of teachers and administrators trained here at Lynchburg.

This campus is at the geographical center of the city, in the heart of it all. From this fulcrum, over the past year, our students spent approximately 70,000 hours serving the people of this city and the surrounding area. And we will continue to do that because we love Lynchburg.

But we haven’t stopped there. Our faculty and students have traveled the globe — spreading some of that loving personality that Dr. Garren talked about. They’ve been helping others, changing lives, making the world a better place since we opened our doors in 1903.

In February of 2017, the Board of Trustees voted to adopt the name University of Lynchburg, beginning in the summer of 2018 – yesterday, in fact. Other names were suggested, but we stuck with Lynchburg because of our history and because of the close ties that we have with our city.