A recent book by Dr. Brian Crim, the John M. Turner Chair in the Humanities at University of Lynchburg, has been cited in the April 30 issue of The New Yorker. 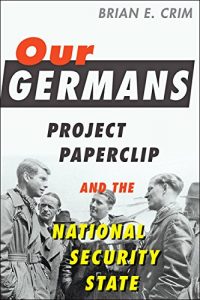 In the article, “How American Racism Influenced Hitler,” contributor Alex Ross references “Our Germans: Project Paperclip and the National Security State,” a book written by Dr. Crim and released in December 2017 by Johns Hopkins Press.

Specifically, Ross writes about Crim’s review of “the shady history of Wernher von Braun and his colleagues from the V-2 program.” Project Paperclip — sometimes called “Operation Paperclip” — was the code name for the secret, joint-intelligence operation that brought 1,500 Nazi scientists and engineers, among them renowned rocket scientist Wernher von Braun, to the U.S. after World War II.