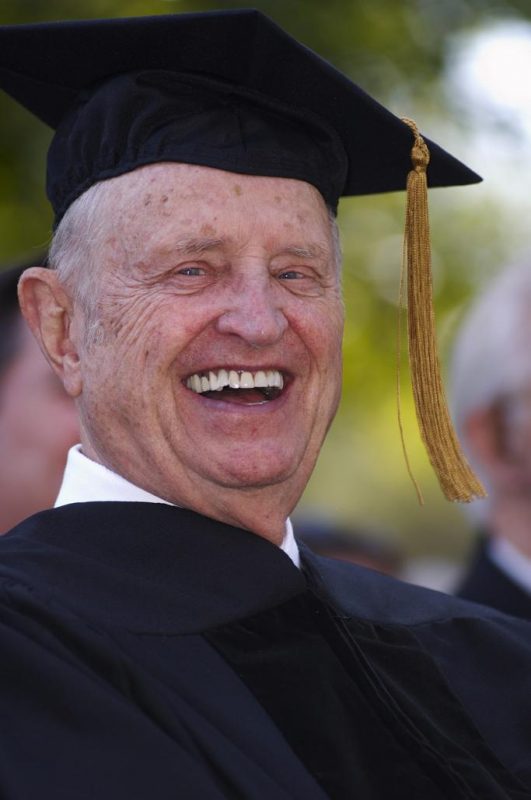 Belk was a North Carolina businessman, lawmaker, and philanthropist who supported causes in education, athletics, and the arts at numerous schools. His relationship with began University of Lynchburg began in 2005, when he made a gift to support upgrades to the track at Shellenberger Field. That gift enabled the College to attract more track athletes and also host NCAA track meets.

Belk’s gifts also supported the construction of Belk Observatory at the Claytor Nature Study Center. His philanthropy has resulted in unique research opportunities for both faculty and students and allowed the College to host public astronomy events.

Understanding the importance of art on college campuses, Belk also provided funds for sculptures to accompany these projects. His gift of the “Fighting Hornet” statue by the track was unveiled in 2012. The road leading to Belk Observatory is graced by a sculpture of a winged fairy peering through a telescope, modeled after the Fairy of the Eagle Nebula.

The College presented Belk with an honorary doctorate in 2006.

Dr. Kenneth R. Garren, president of University of Lynchburg, shared several fond memories of his interactions with Belk. He visited Belk in his Charlotte, North Carolina, office and his Florida home in Key Largo, and Belk occasionally called Dr. Garren on his cell phone to discuss projects. Dr. Garren recalled that Belk made gifts with an expectation of partnership and commitment from the institutions he aided. For example, he told Dr. Garren that his gift for the hornet statue would cover the statue but he expected the College to provide the pedestal.

“Senator Belk financially supported the construction of the University of Lynchburg track, the Belk observatory, and two statues. He understood the importance of athletics in shaping the student experience, of experiential learning in helping students master their disciplines, and of public art in celebrating the culture of a campus,” Dr. Garren said. “We are grateful that he worked with University of Lynchburg on important projects for several years.”

Born in 1922 in Charlotte, North Carolina, Belk followed in his father’s footsteps by devoting his professional career to the family’s eponymous department store chain. He also served in the North Carolina state senate. More information about his life can be read in his obituary.