University of Lynchburg graduate Jane VanBoskirk ’70 brings Eleanor Roosevelt’s story to life in the one-woman show, “Eleanor Roosevelt – Across a Barrier of Fear.” The play follows the life of Roosevelt, portrayed by VanBoskirk, from her childhood to becoming the First Lady and shows how she built up her courage while facing “a barrier of fear” daily. 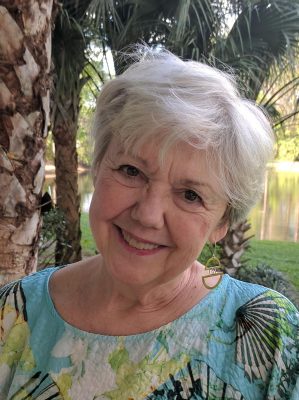 “Eleanor Roosevelt is one of my heroines,” said VanBoskirk.

VanBoskirk first got involved in acting during her senior year of high school and then acted in University of Lynchburg theatre productions. Until getting the lead in her first production at Lynchburg, VanBoskirk said, “I didn’t know I had that ability.”

VanBoskirk’s first involvement with history drama came during a Lynchburg theatre trip to the Southeastern Theatre Conference. During her career, she developed a specialty for portraying historical characters and commanding the stage. “I have always been a history buff and have been doing one-woman shows since 1980,” she said. “I am fascinated with being able to bring history to life.”

When VanBoskirk quit acting 7 years ago to step out of the spotlight, she found herself missing the experience. It was her “lifelong friends” at a University of Lynchburg theatre reunion who convinced her to begin acting again last year.

She met the playwright Sharon Whitney when the Oregon state legislature honored them for their work the arts in 1982. “We became fast friends and I hoped for a collaboration some day,” VanBoskirk said. When Whitney came up with the idea for “Eleanor Roosevelt – Across a Barrier of Fear” in 2008, she immediately thought VanBoskirk could bring Eleanor Roosevelt’s story to life.

“The play follows Eleanor from lonely, neglected childhood to the world stage,” according to VanBoskirk’s website. Roosevelt eventually played a powerful role during her husband’s presidency and became a crusader for human rights. “Throughout the play we see how she learned to articulate her values and vision, how she kept moving forward in spite of disappointments and defeat,” the play summary says. Whitney is the author of more than a dozen plays and four published books, including a 1986 biography of Roosevelt.

When Dr. Clifton Potter, Lynchburg professor of history, asked VanBoskirk to bring the play to Lynchburg, she accepted. “It’s always been a dream to come back and perform for my alma mater,” she said.

VanBoskirk will perform “Eleanor Roosevelt – Across a Barrier of Fear” at 7 p.m. on Wednesday, March 14, in Dillard Theatre. The performance is free and open to the public.

The event is sponsored by the Potter Lecture Fund.