University of Lynchburg will host its first Community Strings Concert in Snidow Chapel at 7:30 p.m. on Thursday, October 19. Joe Nigro, professor of violin and viola and artist-in-residence at Lynchburg, will orchestrate the performance.

The concert will include several classic pieces, such as Mozart’s Divertimento K.138 and selections from Benjamin Britten’s Simple Symphony. 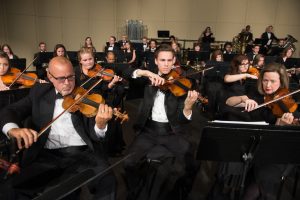 The strings group has been preparing for this concert since University of Lynchburg held a music camp over the summer for students and community members.

“The strings took a break when we were learning music for the parents weekend concert, but now we’re back on track,” strings program member and instrumental education major Thomas Cass said. “We’ve been rehearsing almost exclusively by ourselves, instead of joint rehearsals with the wind symphony.”

Another member of the strings program, music education major Colin Coviello said, “Joe is a great director and has pushed the strings program much farther than one would think possible, and still sees room for growth. He’s consistently improved the ensemble in every rehearsal, and has brought nothing but his A game.”

Although rehearsals are focused and productive, Coviello said they have fun, too. He said his favorite part is “learning from the great improvements that this program has undergone,” and added, “I’ve learned a lot already about how to grow a musical ensemble, both technically and artistically.”

Cass said, “I would say that we’ve flourished under Joe’s guidance and he allows us to create music with him instead of just playing music,” and Cass also has enjoyed “the sense of community you feel” at practices.