Emily Horton ’18 said she “cried a little” when she found out that she’d been selected the 2017 Sommerville Scholar. The annual award, given since 1965 in memory of former professor Richard Clarke Sommerville, is the most prestigious academic accolade presented at Lynchburg.

“I was really excited,” Horton said. “It was just such an honor. It’s an amazing feeling.” 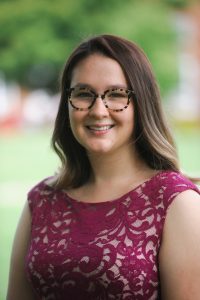 Horton was named Sommerville Scholar during a ceremony held over Parents and Family Weekend, September 15 through 17. In addition to receiving a plaque and a $1,000 cash prize, she will speak next spring at the College’s academic awards banquet.

While Horton said she is “really excited” about her upcoming speech, she admitted, “I’m already a little nervous about what I’m going to say. It’s hard to summarize four years of incredible experiences into a short speech, but it’s such an honor.”

Horton, a Bristol, Virginia, native who spent her high school years in the Lynchburg suburb of Forest, started college as a biomedical science major. After taking two semesters of organic chemistry and an advanced calculus class, however, she decided to pursue mathematics.

“[Math] made more sense to me at that point,” she said. “I think it’s a very creative subject, and most people don’t look at it that way. Finding a solution or writing a proof takes lots of creativity and determination.”

A Bonner Leader, Horton has volunteered with area nonprofits, among them Lynchburg Grows, Lynchburg Daily Bread, and the local humane society. This year, as a senior intern, she’s helping facilitate the program and run meetings.

“Emily is one of those rare souls that has a compassionate and empathetic heart equal to her keen and sharp intellect,” Anne Gibbons, director of the Bonner Leader Program, said. “She is wise and also warm. She is bright and also beloved. Emily is wicked smart and also warmly sensitive.

“It has been said that people don’t care what you know until they know that you care. Because Emily approaches her service in the community and her leadership in Bonner with such deep caring, others are then open and able to learn from what she has to teach and to benefit from the skills she has to share.

“I am thrilled that Emily leaves a lasting legacy of loving leadership as this year’s Sommerville Scholar.”

For two years, Horton also worked as a leader with Peer Assistance Supplemental Study. PASS is an intensive tutoring program in which students work with their peers, helping them improve their grades in classes that are thought of as traditionally difficult.

PASS leaders sit in on classes they’ve already taken and for which they earned an A or B. For Horton, it was calculus. Leaders hold two study sessions and two office hours per week. For Horton, an aspiring math professor, it was a good experience. “It’s given me a lot of confidence to stand up in a room full of my peers and teach them something new,” she said.

Horton also is a Westover Scholar and currently serves as co-president of the Westover student executive board. Dr. Ed DeClair, Westover program director, has worked with Horton since her first year at Lynchburg.

“She is a thoughtful and caring student leader whose work in Westover, the Bonner Leader Program, and the PASS program underscore her commitment to helping others, whether it’s through leadership, service, or tutoring,” he said. “She has a deep commitment to learning and the liberal arts and was an excellent choice for the Sommerville.”

Horton describes her Westover experience as “really influential to me,” and said, “I’m so thankful for the opportunities I’ve had to take different classes. I’ve become so close with many of my advisors through that. … It’s a really cool experience to be a leader. At a much larger school, I wouldn’t have had the same opportunities.”