Next Saturday, October 21, Dr. Tom Bowman, associate professor of athletic training, will toe the starting line for the Baltimore Marathon. It’ll be the second marathon for the 36-year-old mountain-biker-turned-runner and the second time he’s run to raise funds and awareness for the Wounded Warrior Fund. 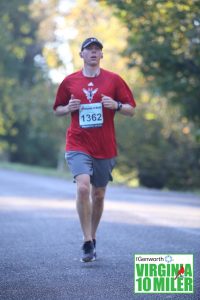 Dr. Bowman will be running in honor of a high school friend who was injured several years ago while serving with the U.S. military in Iraq.

“I have several friends who have served in the military,” he said. “One in particular was discharged honorably for injuries he sustained in Iraq. I didn’t want to just do [the marathon] for me, I wanted to make it more of a service to others somehow. I didn’t want to run it just for me. I wanted to do something bigger than that.”

Dr. Bowman ran his first marathon in 2010, finishing the Marine Corps Marathon in 3 hours, 55 minutes. While he hesitated to “put a number out there,” he said he’s hoping to run faster in Baltimore.

“I’m way more of a runner than I was back then,” he said. “Back then, my goal was just to finish.”