Janice Wilson ’15, who might be better known at University of Lynchburg by her middle name Keely, works for Two Blind Brothers, a New York City-based startup that markets high-quality T-shirts and hoodies, each of which incorporates Braille.

The company, which was featured on the Ellen DeGeneres Show, was launched in 2016 by Bradford and Bryan Manning. The brothers both have a form of macular degeneration called Stargardt’s disease — thus, Two Blind Brothers. Workers at the Dallas Lighthouse for the Blind make the clothing and 100 percent of the company’s profits go toward medical research to find a cure for blindness.

Wilson, an economics major and a member of Westover Honors at Lynchburg, recently answered some questions about her job at Two Blind Brothers and her plans for the future: 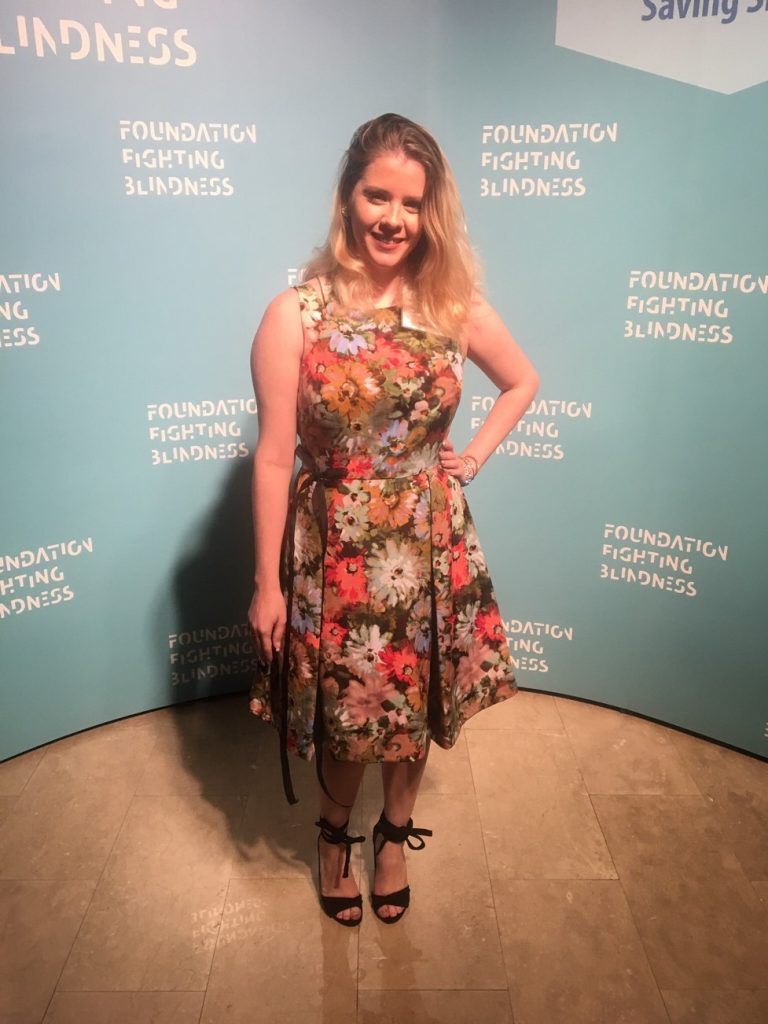 What is your position at Two Blind Brothers? What do you do?

I started as an administrative assistant for Two Blind Brothers, but as the company grew, so did my responsibilities. I was promoted to an operations associate and currently my day-to-day activities include various project-management activities and managing the customer service desk as well as the Two Blind Brothers calendar.

But what’s great about working at a startup is that every day is different and everyone helps with everything. After we were on the Ellen DeGeneres Show we got so many orders that everyone in the office was packaging shipments.

How did you start working for Two Blind Brothers?

Two Blind Brothers kind of found me, actually. I started working for Bradford as his executive assistant at Tiger Lily Capital [in New York City]. Bradford and Bryan were starting to launch Two Blind Brothers when I worked for Bradford. As his assistant, I got to be part of the launch. I helped build the company’s website and found our first interns.

Was anyone at Lynchburg involved in your getting the job?

Dr. Michael Schnur was one of my favorite professors at LC. He helped me throughout my senior year with my thesis and his door was always open if I needed someone to talk to. After graduation, I kept in touch with Dr. Schnur and when he heard about a job opening with Tiger Lily Capital as Bradford’s assistant, he connected me to his son, David, who interviewed me for the position and introduced me to Bradford. Dr. Schnur helped me get my first job out of college.

How did your Lynchburg experience prepare you for this job?

My experiences at LC were crucial in preparing me for graduation. I did a lot on campus: I worked two jobs, I was in a sorority, and I was on the varsity equestrian team. My busy schedule helped me prepare for the work environment at a startup.

I also had the opportunity to study abroad in Quebec, Canada, which helped me get out of my comfort zone and meet new people — perfect when dealing with customer-service issues. I consider myself very lucky and I give credit for a lot of my success to my education at Lynchburg.

What kinds of internship opportunities did you have while at Lynchburg?

While at LC, I interned at Genworth Financial the summer, fall, and winter of 2014 in their customer service center as a workforce management intern. It was a summer internship that grew into something longer after I showcased my work ethic and skillset.

Did any particular faculty or staff have an impact?

What are your career goals, ultimately?

I rode competitively all throughout my childhood. My twin brother is on the autism spectrum and I used to take him to the barn with me and see him interact with animals. It wasn’t until then that I realized how much horses meant to me. Seeing how animals can help people that are dealing with so much physically and emotionally helped me realize what my true passions in life are.

After that, I started volunteering at therapeutic riding centers. My immediate career goal is to help people, no matter where I work, but ultimately, my personal goal in life is to own a therapeutic riding center in the Blue Ridge Mountains one day. I want to help people, whether that means those on the autism spectrum, veterans, cancer patients, or the visually impaired.

What’s next for you?

Throughout my two years working for Bradford, the majority of which was spent working with Two Blind Brothers, I have learned so much about business and about myself … and I feel that I’ve accomplished so much within the company. I think it’s time that I explore other horizons. I don’t have a set plan quite yet!

Finding a job after graduation can be difficult. My biggest piece of advice is to talk to your professors and listen to their advice. Don’t be afraid to take a chance on an opportunity that presents itself and remain open minded. It could turn out to be something completely unexpected.