It only takes a short conversation with Dr. Lesley Friedman’s friends, colleagues, and former students to know that she is greatly missed. 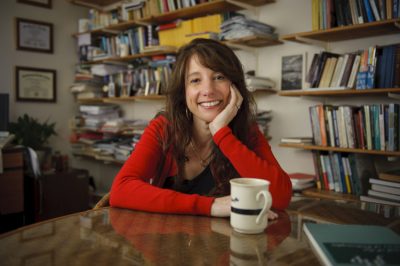 Dr. Friedman died on July 9, 2017, after a long battle with cancer. She is widely recalled as a friend and a mentor with unparalleled intellect and compassion. Her passing leaves what accounting professor and friend Nancy Schneider describes as “a huge, untimely hole in the fabric of this college.”

A celebration of Dr. Friedman’s life will be held at 2 p.m., Friday, Oct. 6, on the steps of Hopwood Hall.

Dr. Tom Brickhouse recalled meeting Dr. Friedman when she came to Lynchburg in 1993, shortly after graduating from the University of Buffalo with a PhD in philosophy.

“We were always just a few doors away from each other and we talked all the time,” he said. “Lesley and I agreed on all the important things. We fought like cats and dogs on trivial things, but that’s what philosophers do. She was just a fabulous colleague.”

Dr. Brickhouse worked closely with her until the fall of 2016, when she resigned at the urging of doctors. “I think she wanted to teach as long as she could,” he said. “Certainly, last fall, there was no reason she couldn’t be in the classroom, but it was getting harder and harder.”

Schneider recalled her friend’s “very keen intellect” and said, “In terms of the ability to communicate complex concepts in an understandable way, Lesley was an expert.”

She also described Dr. Friedman as kind, helpful, and fun to talk to. “She had a sense of humor that seemed to coincide with mine and we found the same things funny,” Schneider said.

Writing on the Westover Honors Facebook page, program director Dr. Ed DeClair said Dr. Friedman “was a true friend and mentor to me.” Political science professor Dr. Daniel Lang said she was an “optimistic and hopeful person,” adding, “Those kind of people are people you like to be around.”

Asked about her work with students, Dr. Lang said one thing that stood out was “her concern for students and her eagerness to help students see why philosophy is important for them and for human beings. She started a philosophy club, got the Ethics Bowl going, and found lots of ways in her classes to provoke interest in philosophy among students.”

One such student, Liz Childress Burneson ’12, said she “bonded instantly” with Dr. Friedman and kept in touch with her after graduation. Burneson described Dr. Friedman as an “informal mentor and advisor to me,” and said her influence extended well past Commencement.

“During my senior year, I felt pushed to attend grad school or law school right out of undergraduate, but she helped me decide to take time to make the right decision,” Burneson said. “I ended up working for three years before law school, and when I started law school I did it with the conviction that I knew this was the right path.”

In addition to her siblings, extended family, and friends, Dr. Friedman leaves behind her husband, Ricky Davis, and two children, Seren Ann Skelly and Patrick John “P.J.” Skelly, all of Lynchburg.