A peace pole that University of Lynchburg unveiled Thursday is a symbol of hope for peace in the future.

But it also stands as a testament to the commitment and example of Anne Gibbons. The Spiritual Life Center staff planned the event as a way to surprise Gibbons and celebrate her 30th anniversary with University of Lynchburg.

As Chaplain Stephanie McLemore explained Thursday, “Anne Gibbons … inspires all who know her to live authentic lives pursuing peace with every action and conviction.” 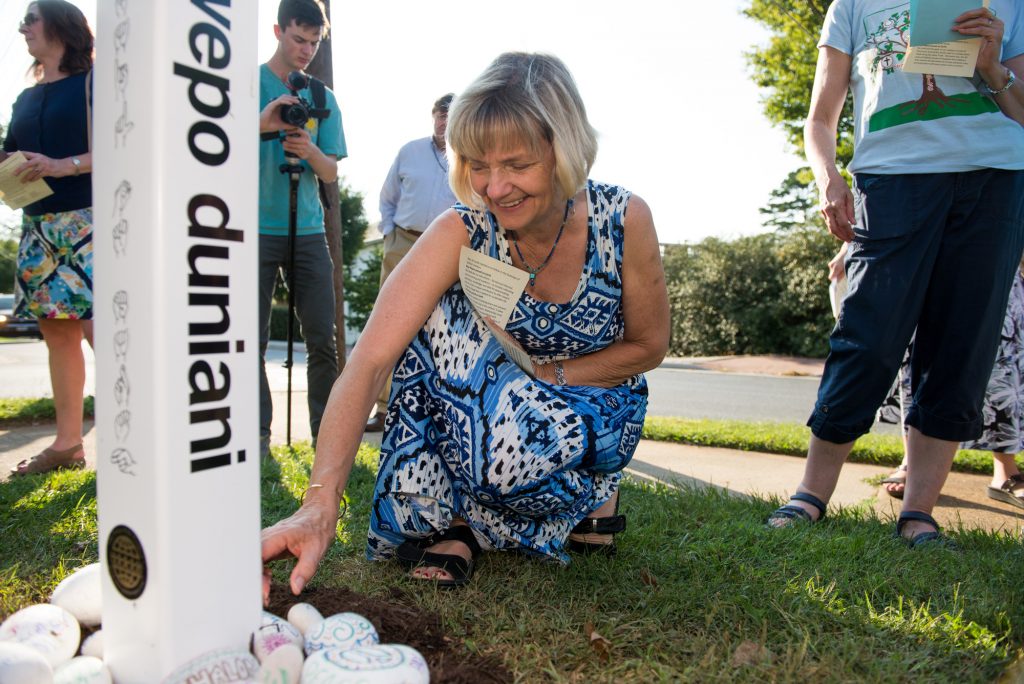 Gibbons, who came to University of Lynchburg as a Catholic campus minister 30 years ago, has served in numerous other roles since then, including her present role as director of the Bonner Leader program and associate chaplain. She knew the peace pole was coming — it had been planned for weeks, and she had a place in the program to make remarks — but she did not know that the peace pole was dedicated to her until the middle of the dedication ceremony.

“I can’t think of anything that would mean more to me than a symbol of peace,” Gibbons said. “But the important thing is what it inspired others to do.” 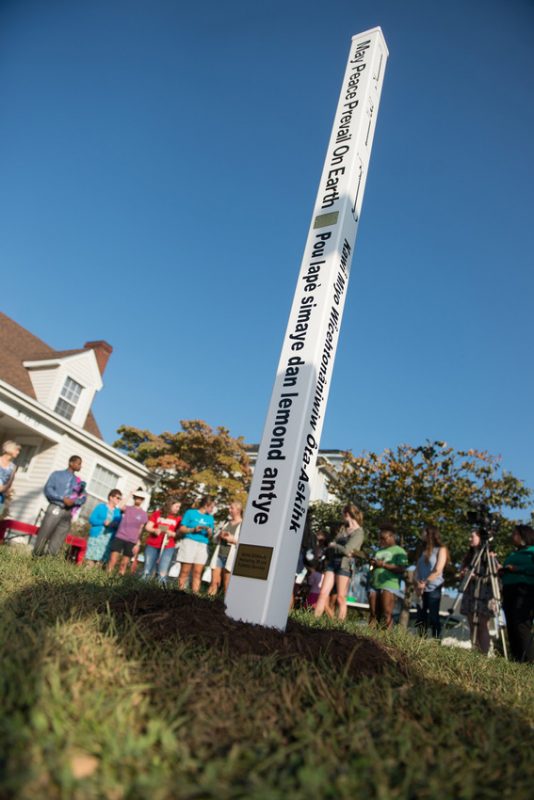 She said the peace pole joins other symbols at University of Lynchburg, such as the LC LOVE sculpture, mean to inspire people in the community to live out the values of the College. “This is a lovely pole, but it’s really meant to inspire us to actions for peace,” she said.

People who attended the dedication wrote messages on rocks and laid the rocks at the foot of the pole. Gibbons encouraged them to think about actions they could take to promote peace internally or among others. “Each time you drive by or walk by or bike by and you see this pole, you’re reminded of your commitment,” she said. “It may be something very personal and internal, because we all know that internal peace that has to begin first. When we have inner peace within ourselves, then it’s easier to have peace with those who are closest to us, and then those who are acquaintances with us, and those with those who are strangers to us, and finally and hopefully, those who may be enemies to us.”

Gibbons not only gives that advice, but she leads by example. “Anne has really set the tone for the commitment to pastoral care and caring outreach to students,” McLemore said prior to the dedication. “She’s the constant voice around campus for social justice and commitment to peaceful, faithful living.”

The eight-foot-tall pole is inscribed with the words “May Peace Prevail on Earth” in eight languages — English, Arabic, Creole, Hebrew, American Sign Language, Swahili, Spanish, and Cree, an Algonquian language spoken by some native peoples in the U.S. and Canada. It also includes a plaque written in Braille.

One of the languages on the peace pole, Creole, was chosen to commemorate mission trips Gibbons has taken to Haiti over the years and the annual Hike for Haiti fundraiser she organizes. The language is spoken by about 10 million people in the Caribbean nation.

Although plans for installing the peace pole have been underway for months, Spiritual Life staff believed recent events — such as violent protests in Charlottesville, Virginia, and other locations, and the threat of conflict with North Korea — make it all the more important to raise a symbol of peace.

“Our peace pole celebrates the community found at University of Lynchburg and celebrates our institutional values of peace and a community trying always to work for justice,” McLemore said at the dedication ceremony. “The peace pole both symbolizes our mission and links us to the work of peace of people of all faiths and nationalities worldwide.”

See the story by WFXR, a Roanoke TV station. 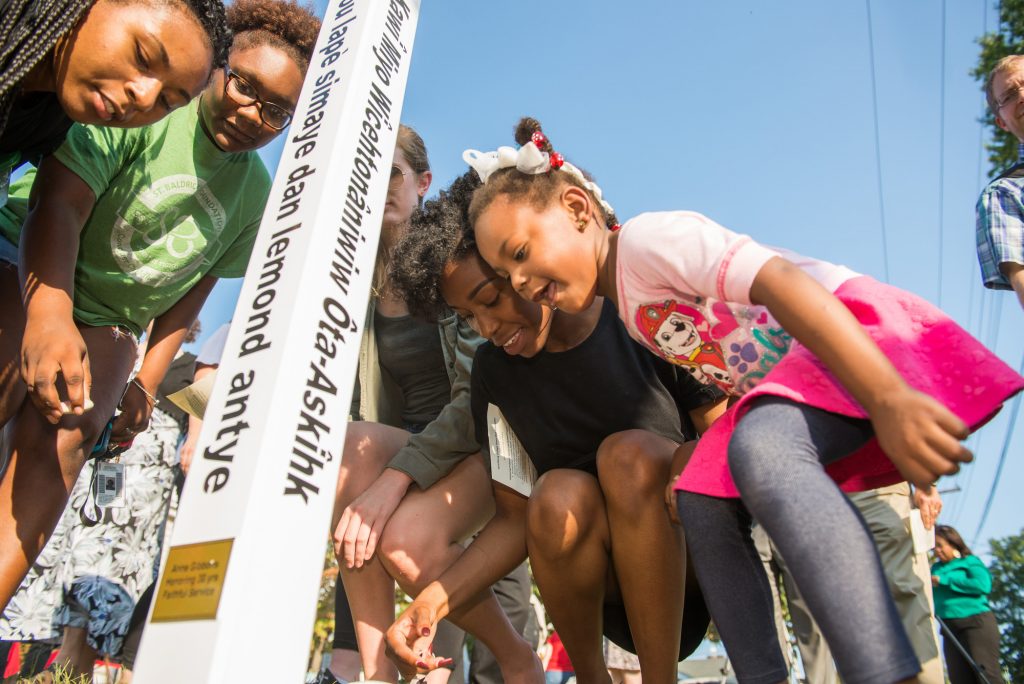 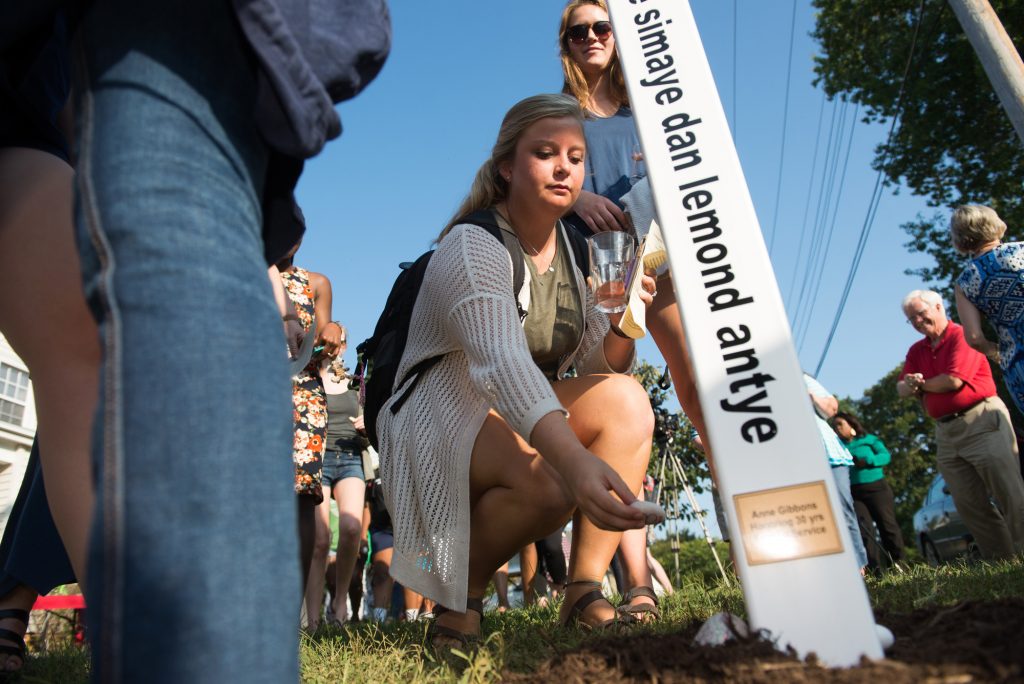