/ News / Class of 2022 undergraduates recognized at University of Lynchburg Commencement

Commencement exercises for the University of Lynchburg’s undergraduate Class of 2022 were held at 9 a.m. on Thursday, May 19, at Shellenberger Field. All told, 425 undergraduates — 189 Bachelor of Arts and 236 Bachelor of Science — were recognized.

After the invocation, Student Government Association President Matthew Gillett ’22, a political science major and Westover Honors Fellow from Oklahoma City, Oklahoma, addressed his class. He started his speech with the story of a near-disastrous candlelight ceremony held at Snidow Chapel shortly after he first arrived on campus.

“That night, as we all marched into the chapel, we were handed a lit candle to place in a bowl of sand,” the 2021-22 Richard Clarke Sommerville Scholar said. “This symbolized the beginning of our journey at the University of Lynchburg, with all of our flames burning next to each other.

“But then, something unexpected happened. In one of the bowls, enough of the wax melted and the candles began to fuse together, creating a massive flame in the middle of the chapel. In a quick-thinking move, an individual who will remain nameless — [ahem] Chaplain Nathan Albert — decided to pour water on the flame, but this action, mixing water with wax, merely caused the flame to grow exponentially toward the ceiling. 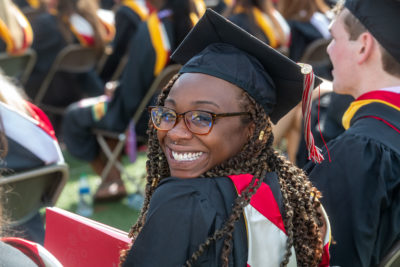 “Now, as you can tell, the chapel did not burn down, after a fire extinguisher was eventually brought in. Of course, this experience brought home the point about no candles in the residence halls, but it also united our class, propelling us throughout our four years — our tumultuous four years — to this very point.”

Gillett also talked about the value of a liberal arts education and said he’d recently concluded that it’s what “makes Lynchburg special.”

“It’s the liberal arts background we all share,” he said. “This shared experience not only allows us to be united in our class schedules, but it also gives each of us a common educational foundation — one that teaches us to care about others and charges us to imagine our impact on the wider world, not just the bubble of a college campus.”

He went on to talk about how Lynchburg students are “encouraged” — he argued “required” might be more true — to take classes outside their major. He not only studied political science at Lynchburg, but also took courses on the musical “Hamilton,” the Third Reich, the ethics-based sitcom “The Good Place,” and hiking and backpacking.

“While at face value, this might seem counterintuitive,” he said, “this helps to shape students not only to be experts in their major, but to be global citizens. … Yes, the liberal arts education we received at Lynchburg has not only taught to be better students, but to be better thinkers and better humans.”

University President Dr. Alison Morrison-Shetlar was next at the podium. After greeting the crowd, she spoke about the pandemic and how over the past two years — trying as they were — the Class of 2022 persevered and thrived.

“Your grit in coming together and responding to a … pandemic represents the ultimate final exam,” she said. “I am so pleased to announce here to family and friends that you have passed with flying colors.”

She also emphasized the three pillars of her administration — leadership development; diversity, equity, and inclusion; and innovation and collaboration — calling them the “DNA of this institution.”

She encouraged the graduates to build on these pillars as they move on with their lives. “I hope these pillars become as much a part of your genetic makeup as they are part of mine,” she said.

Morrison-Shetlar then introduced alumnus and longtime faculty member and administrator Dr. Julius Sigler ’62, ’15 DSc, who would give the Commencement address. “Dr. Sigler, more than anyone I’ve ever met, epitomizes our three pillars and the core values of our beloved University,” she said.

In keeping with that, Sigler started his speech by reflecting on his own graduation and his long tenure at Lynchburg.

“Sixty years ago, I sat in folding chairs about 100 yards from where you sit,” he said, referring to the lawn in front of Hopwood Hall. “The 21st century seemed an impossible distance in the future and here we are — each decade unfolding its own Brave New World.

“As I’ve thought about these remarks over the past few weeks, I realized that I have been a part of this community for more than half of its 119-year existence. I find that incredible. I hope you understand that when I talk about the University of Lynchburg and, inseparably Lynchburg College, I speak with enormous pride and strong bias. I love this place and its people!”

Sigler spoke about coming to Lynchburg in the late 1950s from rural Florida, where he grew up as the oldest of eight children and the first in his family to attend college. To pay for school, he waited tables in the dining hall.

“I came to Lynchburg because the College offered me a job waiting tables in the cafeteria,” he said. “It was a leap of faith. With my small savings and a bit of money my father had borrowed, I was set for the first semester and had no idea what would happen after that. It was the best decision I could ever have made.”

At Lynchburg, Sigler found lifelong friends and mentors. He met his wife of nearly 57 years, Jan Cocke Sigler ’65. His brother and sister graduated from Lynchburg, as did one of his sons and several other relatives. It’s also where he felt called to be a college professor. 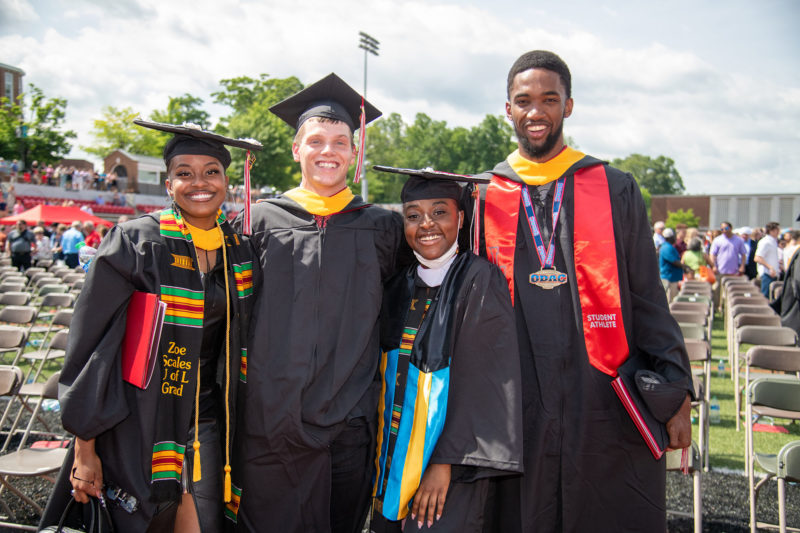 “This place and its people have blessed me far beyond my ability to ever repay the debt I owe,” he said.

Sigler also swam for the College’s swim team. “And just so you don’t get the wrong impression,” he said, “I was on the swim team only because of peer pressure from team members who assumed that anyone from Florida could swim.

“I could swim well enough not to drown, but had never even seen a swim meet. While I would not have traded my four years as part of that very small community for anything, we were probably the most hapless athletic team ever fielded by this institution. I think we managed to win one meet during my time.

“The sports page of The Critograph once urged the community to ‘Pray for our swim team.’ I am very proud of the current generation of Hornet swimmers!” 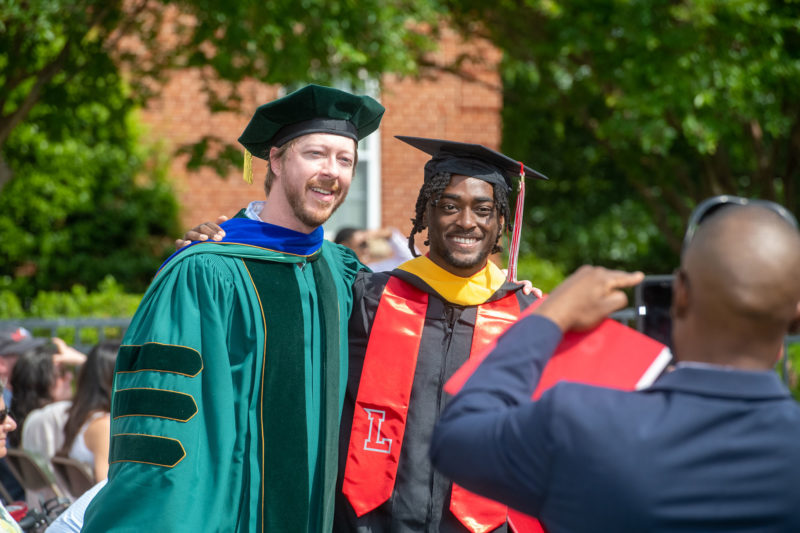 Like Gillett, Sigler also stressed the value of a liberal arts education, telling graduates that it will “be a defining part of your life.”

He added, “Although many of my classmates had careers they never envisioned and that might not have existed when we were undergraduates, they were successful because they learned how to learn.

“That is one of the most important aspects of liberal education. You carry the same skill as we did, and so you will be able to change to meet the demands of whatever career you seek. You will need to change because the nature of work is changing as rapidly as the change in technologies.” 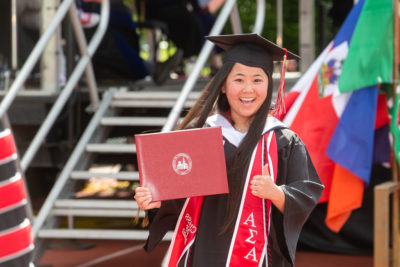 Following Sigler’s speech, degrees were conferred, including a posthumous degree awarded to Sean Cabot Williams ’22. Williams, an English major and brother of Phi Kappa Tau fraternity, died in May 2021.

Williams’ parents, sister, and grandparents attended Commencement, and the degree was accepted on behalf of his family by Dr. Meghan McGuire, professor and chair of the English department.

“He has been missed by his friends, classmates, brothers, and faculty this year,” Morrison-Shetlar said, in presenting the diploma. “Sean left a legacy, his footprint, right here on our campus that will never, ever be forgotten.”

In her closing remarks, Morrison-Shetlar recognized members of the U.S. military present, as well as friends and family of the graduates, faculty and staff, and community members. She urged the graduates to “thank those that have supported you to success during your four years at the University of Lynchburg.”

She added, “A ceremony like this does not just happen. Please join me in thanking the army of people, too numerous to call out by name, for the hard work and tireless planning that went into making this a great day for us all.

“Again, my heartfelt congratulations to the graduates. Now, go forth and make a difference in our community, commonwealth, nation, and the world. Congratulations and join me in saying this one last time, as always, it is a great day to be a Hornet!”