Helen Mundy Witt ’67, who died on Jan. 8 at the age of 88, was more than the first Black graduate of what was then Lynchburg College. She was also an educator, civil rights advocate, wife, mother, friend, author, and an accomplished tennis player.

Witt grew up in Lynchburg and graduated from Dunbar High School, where she was a member of the segregated school’s first tennis team. Coached by tennis pioneer Dr. Robert “Whirlwind” Johnson, she played doubles with Althea Gibson, who in 1951 was the first Black tennis player to compete at Wimbledon. 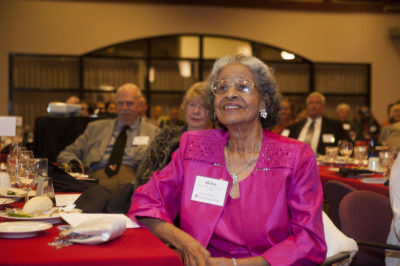 After graduating from high school at age 16, Witt left home to attend Florida A&M College on a tennis scholarship. A year later, when proof of her scholarship was lost during a presidential transition at the college, she returned home to Lynchburg.

Once home, Witt married and had five children, but she never gave up on finishing her degree. In 2014, Witt told the Lynchburg News & Advance that she made her husband, Leroy — a teacher himself — promise that she’d go back to college one day.

In 1965, in her early 30s and still wrangling small children, Witt enrolled at Lynchburg. As her daughter, Janice Witt Smith, told the newspaper years later, “When Mama was going to school, she still made it home in time to meet us when we got home from school. … She took care of Daddy and the five kids. She studied when we studied and after we went to bed. She was always up before we were and long after we went to bed.

Over the summer, between semesters, Witt and her family were migrant workers, picking tobacco in Connecticut for the Hartman Tobacco Company. Although she wouldn’t know Witt until years later, it was this determination to further her education and take care of her family that Annette Stadtherr, director of multicultural services at Lynchburg, considers Witt’s legacy.

“She was an adult learner, doing her schooling as a wife and mother of five small children when that was unconventional,” Stadtherr said. “She never let a hurdle stop her. Through faith and family, she persevered.”

Witt earned her bachelor’s degree in education in 1967, and in 1978, added a Master of Education. She told the newspaper in 2014, “Lynchburg College was wonderful for me. The teachers were wonderful to me. I love school, I loved to learn.”

Witt taught in the city’s public schools for more than 35 years, and in 2007, she received the J. Edward Petty Outstanding Alumni Award from the Lynchburg College School of Education. In 2013, she spoke at the College’s annual Martin Luther King Jr. celebration and was recognized for her contributions to education and civil rights with an honorary Doctor of Education. 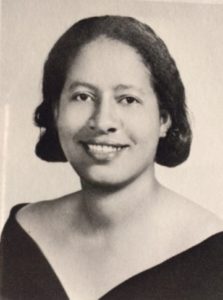 In 2015, Witt published a book about her life and insights, “As Memories Ebb and Flow,” and in 2016, she received the Thomas Gibson Hobbs Memorial Award, the highest honor bestowed on a Lynchburg graduate by the alumni association. Her classmates also honored her at their 50th reunion in 2017.

In 2018, Witt was the guest of honor at the University’s inaugural Multicultural Gala, where a new award for service was presented in her name. The Helen Mundy Witt Multicultural Award recognizes an individual “who has enhanced the culture of inclusion on campus by promoting togetherness, diversity, and respect; created opportunities for underrepresented populations; and/or encouraged positive community between persons of different backgrounds.”

Stadtherr was the first recipient of the award and Witt’s “date” for the event. “She would be my ‘date’ to the Multicultural Gala each year we had it,” Stadtherr said. “Her daughters trusted me to go pick her up and bring her to the party and then take her back home again. She was a delight — loved the University, loved her family, and was a great storyteller.”

Stadtherr added that in her 30-plus years at Lynchburg, she counts receiving an award named for Witt as one of her greatest achievements. “What an honor,” she said.

In addition to the Multicultural Award, Witt’s legacy will live on at the University through the Helen Mundy Witt Society, an interest group established in 2013 that focuses on the advancement of positive, professional networking among the University’s Black alumni.

“During the time I knew Helen she continued to give back by sharing her story, participating in events for our African American students, and celebrating with alumni,” Heather Garnett ’05 MEd, director of alumni relations, said. “Helen will be missed by countless alumni and friends, but her legacy will live on in our history and in our actions.”

A private Homegoing Service and celebration of Witt’s life will be held at 11 a.m. Thursday, Jan. 14, at Community Funeral Home in Lynchburg. Due to COVID-19 restrictions, the service will be open only to family, but it will be livestreamed.