After two tough days of virtual competition at regionals last weekend, the University of Lynchburg 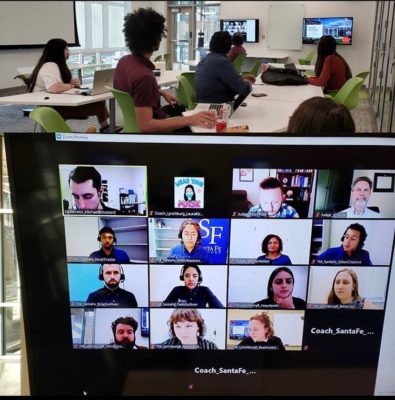 Ethics Bowl team is headed to nationals. A third-place award at the virtual tournament hosted by the University of North Georgia earned them the coveted spot.

“It’s impressive they were able and willing to do the preparation to do so well at the event. I’m super proud of them. It shows how well they are able to think on their feet and acclimate to an online format, which is a first for us,” said Dr. Laura Kicklighter, Ethics Bowl coach and assistant director of the Westover Honors College.

The annual regional event consisted of a debate-style competition with around 15 regional cases. There are four rounds, a semifinal round and a final round within the competition to determine the top teams that will advance to the national competition sponsored by the Association for Practical and Professional Ethics (APPE).

According to Team Captain Beatrice Kelly-Russo ’21, a philosophy and political science major from Great Falls, Virginia, the new online format was challenging, but the team learned to adapt.

“It’s great to get that win in my senior year. I am on cloud nine and couldn’t be happier with the performance of my teammates,” she said. “It comes down to the fact [that Professor] Kicklighter is the most inspirational person and has pushed us beyond what we thought we could do.”

She added that being on the team has given her a chance to talk to many different faculty and staff at Lynchburg on their fields of expertise. As part of interviewing experts for the debate preparation, one team member reached out to a new “celebrity,” which gave her an advantage at the competition.

One of the ethical cases given to the team was how far documentary-style films can stray from the truth for entertainment. Maddie Miller ’23, a history and political science major from Rustburg, Virginia, sent a letter to Joe Exotic of Netflix’s “Tiger King” — currently an inmate at Federal Medical Center Fort Worth — asking for his perspective on the documentary. He wrote her back with his opinion and listed court cases like his in a handwritten letter.

“We got to use it in the debate versus Clemson. The judges were impressed with that amount of work and it helped us go over the edge to win that round,” Kelly-Russo said.

The team will have another chance to win big at the virtual APPE National Championship on Feb. 27-28, 2021.