Twenty-eight first-year students at the University of Lynchburg are participating in GEAR UP, a U.S. Department of Education program that stands for “Gaining Early Awareness and Readiness for Undergraduate Programs.”

That’s almost three times as many as there were in 2019. According to the State Council of Higher Education for Virginia, which administers the program, there were 10 GEAR UP students in last year’s freshman class at Lynchburg.

GEAR UP follows a cohort of students from seventh grade through their first year of college, or whatever they decide to do after high school graduation — certificate programs, apprenticeships, the workforce, the military, etc.

It’s goals, described on SCHEV’s website, are “to significantly increase the number of students in disadvantaged communities who are prepared for, pursue, and succeed in postsecondary education, whether that is a bachelor’s degree, associate degree, or qualified certification.”

Throughout middle school and high school, GEAR UP students explore postsecondary options and tour Virginia colleges and universities, including the University of Lynchburg. The program also sent some students, including Taylor Morgan ’24, to the National Council for Community and Educational Partnerships/GEAR UP Youth Leadership Summit in San Francisco. 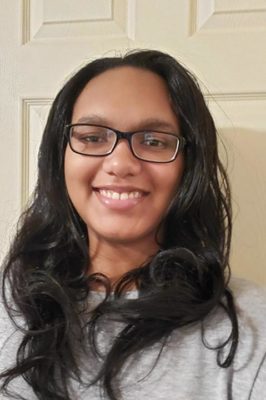 “GEAR UP … provided us with various resources to expand our knowledge on postsecondary education,” Morgan, who went to Heritage High School in Lynchburg, said. “These resources are very helpful because many GEAR UP students, including myself, are first-generation college students.”

Perhaps most importantly, GEAR UP provides students with a one-time $5,000 grant. For some students this grant “could be the ‘deal breaker,’” said Annette Stadtherr, director of multicultural services at Lynchburg. “It may mean whether they are able to attend the University or not.”

Morgan, a biomedical science major with a Spanish minor, also is GEAR UP Virginia’s student ambassador at Lynchburg. As such, she keeps her GEAR UP classmates abreast of important program information. She’s also planning two events this year to bring GEAR UP students together, albeit most likely virtually.

“I’m glad to be the GEAR UP student ambassador because I’m still able to connect directly with this program and spread the word about all of the remarkable resources and information GEAR UP has so graciously granted us,” she said.