The lobby in Schewel Hall was abuzz with chatter and coffee on Monday morning as teams from 15 colleges eagerly awaited rounds three and four of the 2020 Wells Fargo Ethics Bowl. Hosted since 2000 by the Virginia Foundation for Independent Colleges, this year’s competition took place at the University of Lynchburg.

Lynchburg’s president and Ethics Bowl co-chair, Dr. Kenneth Garren, was right there, too, ready to root for his Lynchburg teams — and a little bit for his alma mater, Roanoke College — one last time before his retirement this summer.

This year’s theme, “Ethics and Higher Education,” presented the students with cases they might encounter on their college campus.

Round three, which saw Lynchburg’s Team 2 pitted against Roanoke, focused on the naming of a campus theater for an alumna and actress who had once filmed a racist movie before participating in more inclusive projects. Should the student involved in the committee support that the theater be named for the alumna, or should the name be changed?

Roanoke argued for changing the name, claiming one could find other ways to celebrate the alumna’s accomplishments and provide more context, while Lynchburg’s Team 2 made its case against a name change, citing the racist movie as one isolated incident, and with the caveat that this should provide a learning opportunity to promote inclusion.

After a close battle, Lynchburg shone in the concluding remarks and claimed the victory for the round.

“We don’t ignore the good George Washington did, even if he was a slaveholder,” argued history major Madison Miller ’23. “We acknowledge both.”

Having won rounds one through three, Team 2 would go on to lose the fourth round. Team 1, on the other hand, won its fourth round (for a 2-2 final record) against Emory & Henry College in a case that centered on sexual allegations against a female professor.

Finding similar solutions, the two schools navigated a fellow professor’s moral dilemma of choosing between his obligations as a friend of the accused, as a lawyer, and as a faculty member and mentor to undergraduates.

Both teams were coached by Dr. Laura Kicklighter, an associate professor in the Westover Honors College, and assistant coach Mary King ’20.

Despite strong performances, neither Lynchburg team made it to the final round. There, last year’s runner-up, Virginia Wesleyan University, got its first win by defeating frequent champion Hampden-Sydney College. The winner’s name will be engraved on the Batten Trophy, named after the Ethics Bowl’s initial funders, Jane and Frank Batten, and displayed on Virginia Wesleyan’s campus. 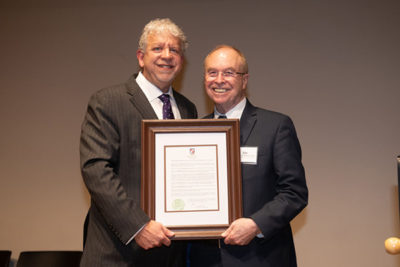 But there was plenty of reason for the Lynchburg community to celebrate. In a special ceremony during Sunday’s dinner in Drysdale, Garren was honored for his many years of service to the VFIC and higher education.

“It is very fitting that tonight we honor President Ken Garren, the man who has poured the last 19 years into making this university a better place,” Matt Shank, president of the VFIC, said. “Ken has also amassed a grand total of 51 years in higher education — truly unbelievable.”

Recounting Garren’s numerous accomplishments at Lynchburg and the VFIC, Shank noted that those things only represent what Garren has done, not who he is.

“Ken … has boundless energy, passion for everything he does and is one of the kindest people I know,” Shank said. “He is truly a friend who would stop everything he is doing to help if you needed it. President Garren has been quoted as saying that the thing he takes the greatest pride in are ‘the students that graduate from Lynchburg.’ Ken is a role model for all of us.”