/ News / ‘It’s A Wonderful Life’ at University of Lynchburg

University of Lynchburg will present “It’s A Wonderful Life: A Radio Play” Thursday, December 12, through Saturday, December 14, at 7 p.m. in the Dillard Fine Arts Center studio theatre. The performance is free and no tickets are required, but seating is limited.

This traditional holiday tale will be brought to life in a not-so-traditional way, by transporting the audience to a 1940s radio studio. It’s being directed by Katie Gardner ’08, a self-confessed history buff who was a theatre major at Lynchburg. 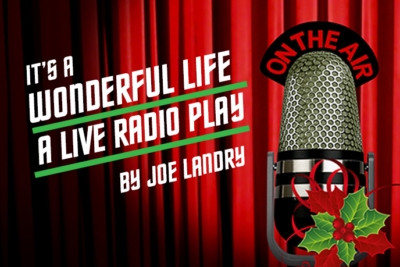 “Period pieces like this one are something that I’m really crazy about,” she said. “Trying to get these student actors to enter a different time period in their performance has been very interesting and exciting. It has been really fun to put them into a different era.”

Gardner, who makes her living training and handling horses, is a champion for local theatre, having directed at Bedford’s Little Town Players and for the festival of new plays at Mill Mountain Theatre and Hollins University in Roanoke. She also prepares performance events for the D-Day Memorial in Bedford and Old City Cemetery in Lynchburg.

She also has performed, created hair and make-up, and stage managed for Encore Youth Theatre summer musicals at the Academy Center of the Arts in Lynchburg. She credits her success to her passion.

“We do it because we want to, not because we have to,” she said. “I think that’s paramount. No matter how active or inactive I have been, it’s something that I could just jump into and be very passionate about and I will always be able to do it.”

Despite all of her success in the local theatre community, Gardner still describes her years at Lynchburg as the best four years of her life. “We have professors who are very experienced, knowledgeable, and really know what’s going on in the industry,” she said. “They have their finger on the pulse of the theatre industry.”

Speaking to current students, she added, “You should absolutely make the most of their knowledge.”

The students acting under Gardner’s direction certainly are taking advantage of their time with her. Gillian Trost ’23 said, “I have had so many ‘aha’ moments working under Katie. I think the most impactful would have been when I realized I could manipulate my voice to better represent my character. I have also been getting so much more comfortable on stage in general. It’s been great.”

Tiernan Harcourt-Brooke ’22 shared what he thought about working with someone from outside the University, calling it “a shift from what I’m used to with Jeff and Loretta Wittman directing, but it is a great shift.

“Katie is very hands-on and involved with us as a cast, as well. Katie has a clear vision in mind for what she wants in the show. She makes sure we get it right and that we can represent our characters accurately.”

Dani Hicks ’22 said Gardner’s directing style gave her more confidence as a performer. “Katie said to us, ‘I don’t care if you think you’ll make a fool out of yourself. Just go out and don’t care.’ It’s supposed to be silly,” Hicks said. “You [have to] play the part of these little radio girls, going out there and singing the tune.”

Even though her day job isn’t in theatre, Gardner said she uses her degree all the time. Through working in the scene and costume shops at Lynchburg, she gained carpentry and sewing skills, which she uses in her barn, as well as in the local theatre community.

“Because of my major, I have been able to work elsewhere, like in Bedford and other areas, because they knew I got a good education here,” Gardner said.

Gardner also emphasized that Lynchburg’s students have access to a strong theatre scene, not only on campus but in the surrounding community. “I think we have a great arts community, locally,” she said. “We have so many resources around Lynchburg. Everybody kind of thinks that they want to go to New York and make it big. For most of us, that’s not usually realistic.

“Most people can’t afford to go starve in New York and hope that they someday get a tiny part in something. What [students] don’t realize is that applause sounds the same in Lynchburg as it does everywhere else.”