A bill introduced to the California state legislature and sponsored by the California Academy of PAs, a group that includes Dr. Jeremy Adler ’19 DMSc among its leadership, was signed on October 9 by Gov. Gavin Newsom.

California SB 697, which concerns the concept of “optimal team practice,” will become law on January 1, 2020. Optimal team practice, as explained by the American Academy of PAs, “occurs when PAs, physicians, and other medical professionals work together to provide quality care without burdensome administrative constraints.”

Adler, a 2019 graduate of the University of Lynchburg’s Doctor of Medical Science program, is past president and current task force chair of optimal team practice for CAPA, which advocates for PAs and the PA profession in the state of California. In that capacity, he testified in support of SB 697 in February 2019.

Since then, Adler said, the bill went through “a series of amendments,” and while CAPA’s goals weren’t fully met, some positive changes are coming for PAs in California. “It definitely advances our profession in many ways, but doesn’t achieve optimal team practice,” he said.

“We’re required to have a supervising physician, but it removes many of the day-to-day administrative things, like cosigners on charts and chart review. It removes protocol-based practice and the need for a formulary of drugs. It moves the oversight of PAs to the standard of care. … It allows physicians and PAs to decide how best to practice together.” 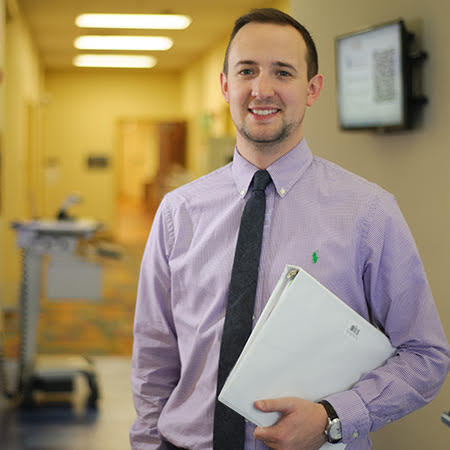 Adler is co-owner and chief operating officer of Pacific Pain Medicine Consultants, which has offices in Oceanside and Encinitas, California. He has been a PA for 20 years. He first heard about the DMSc program while working on an AAPA task force with Dr. Jeremy Welsh, dean of the University of Lynchburg’s School of PA Medicine.

“I saw it as an opportunity to strengthen my skills in research and in policy, and thought it would level, somewhat, the playing field in health care, where every other health care professional has achieved a degree of a doctoral level,” Adler said. “I thought it was a unique opportunity and it was kind of exciting to return to academics.”

In considering the program, Adler said he thought it would strengthen his “scholarly approach” to the profession, give him a “better command of the literature,” help him better defend his treatment plans, and enhance his ability to advocate for his profession, both statewide and nationally. Having finished the one-year program, Adler said it’s done all of this and more.

“The DMSc really opened up the viewing angle so that you understand how health care is administered and the legal aspects and global impact,” he said. “It’s given me a 30,000-foot view.

“After 20 years of practice, I didn’t find, at end of the program that, clinically, my skills were primarily sharper. What I found was I understood how the patient fits into a bigger system, and I felt more equipped to navigate and potentially enhance that situation.”

Of the DMSc program, he added, “Great things are happening there at Lynchburg” and that “it’s going to be a rising tide. What has started is something that will be a catalyst now for the profession. I foresee, in the not-too-distant future, where this is the academic degree awarded, as it is consistent with the rigor and contributions that PAs make.

“PAs [had been] educated at a doctoral level, but not awarded a degree. It took Lynchburg to spark this and I think it’s going to have quite a movement and will be good for the profession, the patients, and the system. I think everyone benefits here.”