A foul ball from a powerful slugger doesn’t give fans much time to react, and it can hit them with the force of a bowling ball dropped from 11 feet high. 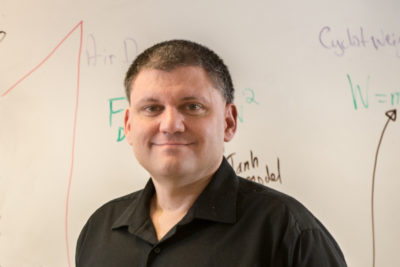 That’s according to Dr. John Eric Goff, a University of Lynchburg physics professor. In recent weeks, The Washington Post, CBS,  and NPR’s All Things Considered asked him to weigh in on the physics involved when a foul ball flies into the stands at a major league baseball stadium. The stories were prompted by some high-profile incidents when foul balls hit fans sitting just beyond a ballpark’s protective netting.

Goff explained to the media outlets that baseball batters are hitting with more power than in the past, meaning a ball can zip to the stands in about 1.2 seconds. Fans have to react quickly, if they’re paying attention at all.

Goff also contributed his expertise to Science Direct for an article about the soccer ball being used in the Women’s World Cup.

Goff also is blogging daily about the Tour de France and his predictions for each stage. He and his students use the laws of physics and data about the terrain to estimate the amount of time it will take for the winner to cross the finish line of each stage. After the first five stages, They have three predictions within five percent of the actual time.