During winter break, a team from the University of Lynchburg traveled to New Orleans, where they helped rebuild homes that were destroyed by Hurricane Katrina in August 2005. The group, led by communication studies and nonprofit leadership professor Dr. Jimmy Roux, partnered with Youth Rebuilding New Orleans for the service-learning project.

YRNO was founded after Hurricane Katrina. The nonprofit purchases and rebuilds hurricane-damaged homes and then sells them to local teachers who want affordable homes in a revitalized neighborhood.

The Lynchburg team consisted of 13 students and Dr. Roux, a New Orleans native who has taught at Lynchburg for 20 years. It was the third time in the past four years that Dr. Roux has taken students to his hometown to work with YRNO and experience the city’s unique culture.

He began the tradition in 2015. “It was the 10-year anniversary of Katrina and we wanted to do something. I also wanted to get more involved in nonprofits,” Dr. Roux, director of Lynchburg’s Master of Arts in Nonprofit Leadership Studies program, said. “I wanted to offer students an opportunity for service, so they could use it on their resumes. I want them to be well-rounded and get outside of Lynchburg.”

The group left for The Big Easy on December 27. They traveled in two rental vans, funded with a $1,500 grant from The Macauley Foundation. The foundation, as described on its website, give grants to causes “that exemplify compassion for humankind, and are committed to improving lives the world over.”

“I learned how to do side paneling, which was super fun, and we got to repave sidewalks, too,” Walker, of Lynchburg, Virginia, said. “That was one of the best moments on the trip to me. It was so humbling to rebuild what was destroyed several years ago during Hurricane Katrina.”

Dalton Hoppe ’19, who has been to New Orleans three times with Dr. Roux, said it’s inspiring to see homes he’s worked on in past years being enjoyed by their new owners. “It feels great, especially knowing the people are living in them now,” Hoppe, an accounting major from Buchanan, Virginia, said. “I hope that they enjoy them. It looks like they enjoy them. It feels nice to know that I did something to help them.”

For most of the students, it was their first trip to New Orleans. “This was my first time going on the NOLA trip and my expectations were completely blown out of the water,” Walker said, using a common nickname for New Orleans. “There were two things that attracted me to the trip: the opportunity to do service and exploring another place I have never been to.”

A highlight of the trip is having dinner with Dr. Roux’s family in the city’s Garden District. “We go to one of their houses and feast,” Dr. Roux said, referring to his cousins and a sister who live in New Orleans. “They cook and tell Katrina stories. Their stories are phenomenal. I think they should write books.”

For Walker, this experience was just one more example of Dr. Roux’s dedication to his students. “Spending time with Dr. Roux and his family only certified [for] me how amazing he is,” she said. “Roux truly values his students and his work, and it showed a lot when we were in his hometown. He encouraged us to try new things and to explore. Roux was one of the key ingredients to making this trip a success.”

As one might imagine, New Orleans’ distinctive culinary scene also was a hit. “I had alligator for the first time,” Jo Lindahl ’19, a psychology major from Buchanan, Virginia, said a few days after the trip. “Their food is so good. We’re all in a group chat still … and we’re still talking about the food.”

Walker was particularly fond of the beignets, a powdered-sugar-covered fritter served at the French Quarter’s world-famous Café du Monde. The group visited the café numerous times during the trip. “My heart still yearns for the food,” Walker said.

In addition to food, the group also experienced the history and culture of the Crescent City. They toured the historic St. Louis No. 1 cemetery, final resting place of many famous New Orleanians, among them Marie Leveau, a voodoo priestess, and Homer Plessy, plaintiff in the landmark U.S. Supreme Court case Plessy v. Ferguson.

They also took a voodoo tour, a bicycle tour about music, and attended a jazz concert.

On New Year’s Eve, they were in the French Quarter, watching the fleur de lis drop, similar to the glittery ball drop in New York City’s Time Square. It was there that Hoppe added a little more bling to the occasion by proposing to Lindahl, his girlfriend of five years.

Because he and Lindahl had been on all three New Orleans trips with Dr. Roux, Hoppe thought the location and date were fitting for his proposal. “I wanted to do it in New Orleans because we both love the place,” Hoppe said. “I just thought it would be nice after the fleur de lis drops.”

Second guessing himself about exact timing, however, Hoppe surreptitiously texted Walker for advice. Walker, standing nearby, promptly erupted in tears. “Anyone who knows me knows I’m a big bundle of emotions,” she said. “I wasn’t aware of the proposal until 10 minutes before the countdown for 2019.

“Dalton had messaged me for my advice on whether he should propose before or after the drop. Funny thing about this is there were so many people around us and the [cell] service was just going crazy, so his message wasn’t able to load and all I could see was, ‘Hey, I’m planning on proposing to Jo and was wondering if you had any advice.’

“Immediately, after I saw that, the waterworks started to flow. I gave him a little side eye and mouthed ‘After,’ so that they could both take in the moment for the New Year and he could really surprise her.”

Lindahl, not completely oblivious to the drama, saw Walker crying and asked why. Walker, keeping up the charade, tearfully exclaimed, “I just love New Orleans so much!”

After the fleur de lis dropped, Hoppe popped the question (and Lindahl accepted). “The countdown ended and the next thing you know he’s on one knee with the prettiest ring I have ever seen,” Walker said. “It was so beautiful to see two people that are so in love and help celebrate such a wonderful moment.” 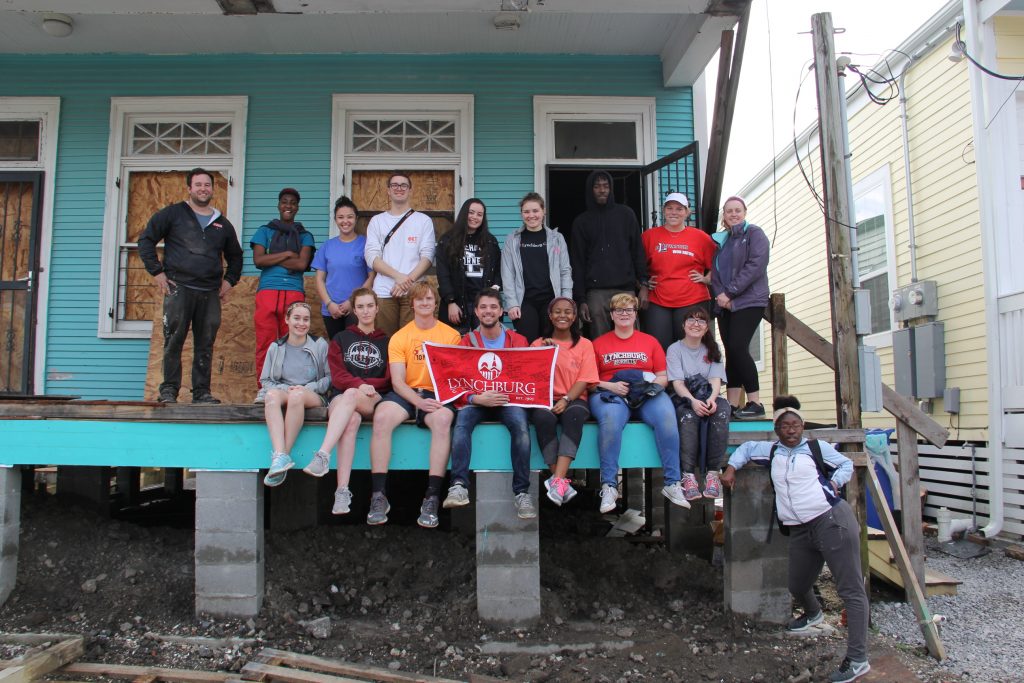 On January 1, the group headed back to Lynchburg, full of beignets, jambalaya, new friends, and memories.

“I loved New Orleans so much,” Walker said. “From the city, the people, and the food, it was such an amazing experience and I truly did not want to leave. It was very emotional for me in the end because I missed Virginia, but a part of me wasn’t ready to leave NOLA. I cried on the way home.

“If anyone has the chance to go on this trip, please do. It’s an amazing and humbling experience and you can’t beat the price for what you get out of it. This will forever be on the best moments I’ve had in my college career and it’s all thanks to Dr. Roux. It’s true what they say: Love NOLA and she will love you right back.”