World-renowned anthropologist Dr. William Bass will return to the University of Lynchburg to give a talk about gravesite excavations on Thursday, October 4, at 7:30 p.m. in Sydnor Performance Hall. The talk is free and open to the public.

Dr. Bass will share stories from a series of excavations at Native American burial sites he conducted in the Great Plains region from 1956 to 1970. While the Army Corps of Engineers was building a series of dams in the Missouri River, Dr. Bass excavated sites that would become covered by man-made lakes. The goal was to preserve as many artifacts and as much knowledge about the cultures of the Native Americans who had lived there. 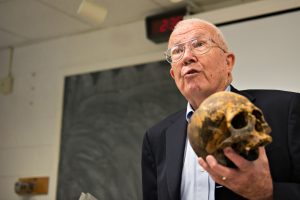 He also will share the story of a summer he spent studying burial sites in northern Iran during that same time period, he said.

Dr. Bass is the founder of the University of Tennessee Anthropological Research Facility known as the “Body Farm” the co-author of several nonfiction books, including Death’s Acre and Beyond the Body Farm, and he has written a series of mystery/crime novels with journalist Jon Jefferson under the pseudonym “Jefferson Bass.”

The event is sponsored by the University of Lynchburg, Historic Sandusky, and Dodson Pest Control.