For Sykethia Findley ’19, who goes by the nickname “Keke,” going to South Korea was a dream come true. “Studying abroad has always been a dream of mine, ever since I found out what ‘study abroad’ meant,” Findley wrote in an application to the Virginia Foundation for Independent Colleges, who awarded her a $2,000 Experiential Learning Scholarship for the trip.

Findley traveled to South Korea on June 23 with six other Lynchburg College students and Michael Kelly, instructor of education, leadership studies, and counseling, and director of field placements at Lynchburg. The students are spending a month in the Korean Studies Summer Program at Hannam University, Lynchburg’s “sister school” since 1984. Under the partnership agreement between the two schools, there have been student and faculty exchanges over the years.

Findley, a psychology major from Fairfax, Virginia, said she was “very nervous” about traveling overseas for the first time, but she also was very excited. “I chose the program in South Korea because I’ve always liked learning about its people’s language and culture,” she said. “I’ve been a huge fan of K-POP — Korean pop and hip-hop music — for a few years now and always planned on going [there] one day.”

At Hannam University, the Lynchburg students are taking for-credit classes in Korean society, economy, history, and language. They’re also touring historic sites, museums, and Buddhist temples; visiting the Demilitarized Zone between North and South Korea; and watching Korean movies and baseball. During the final week of the trip, the students will earn additional academic credit by helping teach English at a local middle school. 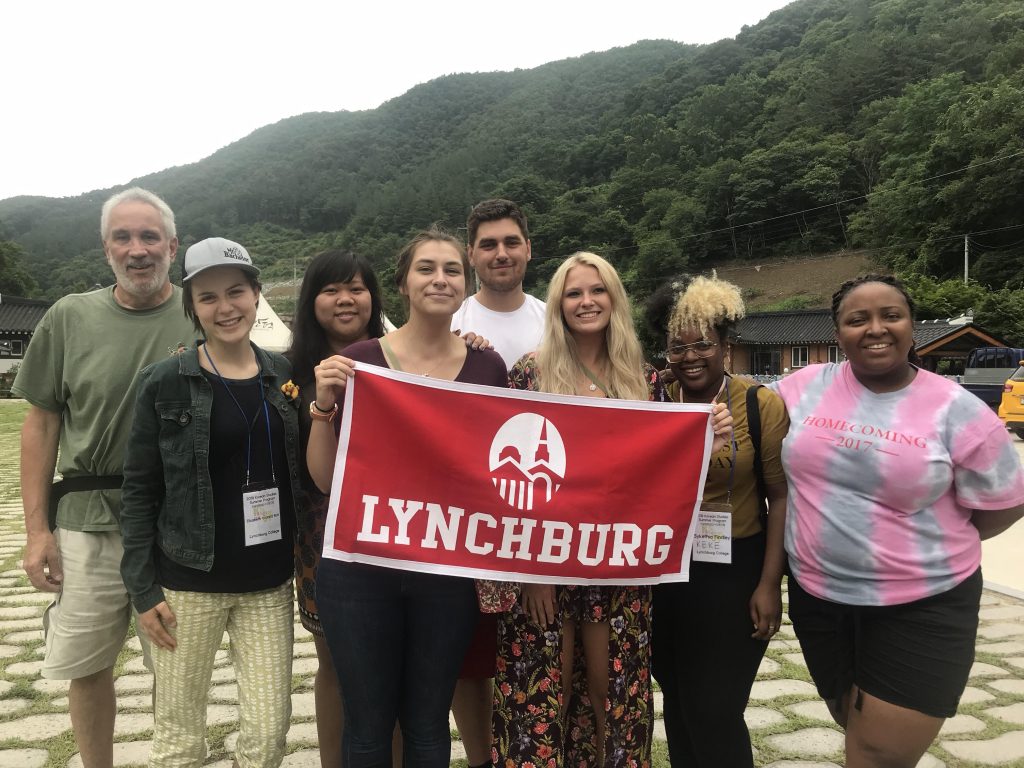 Before the trip, Kelly, who has been to South Korea once before, said he was anxious to explore the country’s history. “I’m just looking forward to the history,” he said. “The ancient parts of it, the emperors, the palaces. My understanding is that a lot of those things are intact.”

Findley said she wants to learn more about how different cultures — specifically, independent vs. interdependent cultures — view mental health and other issues, a subject she’s researched while at Lynchburg. “Here in America, we’re highly independent and are often encouraged to seek help with our mental health,” she said. “It wasn’t always like that, and it’s still an unpopular opinion to most because of all the stigma that revolves around going to a therapist. … These stigmas are known to plague interdependent cultures greatly.”

After she graduates next May, Findley plans to work in the field of social psychology as a guidance counselor, school psychologist, or academic adviser or coach. “I just know that I really want to help kids and teens see their potential in life and help them prepare for a brighter future, no matter what their circumstances are in the moment,” she said. “I want to become the person that I needed when I was in school.”

Findley also wants people to know that study abroad is for everyone. “I didn’t have to pay anything out of pocket, and I think that’s what’s making many students hesitant about studying abroad,” she said. “I often hear from others that studying abroad is too expensive or that there’s no way that they can afford to go. But most don’t know that financial aid is out there for students like me who want to travel but don’t have the means or financial stability to do so.”