/ News / Senior showcases display cultural art and exhibits for everyone 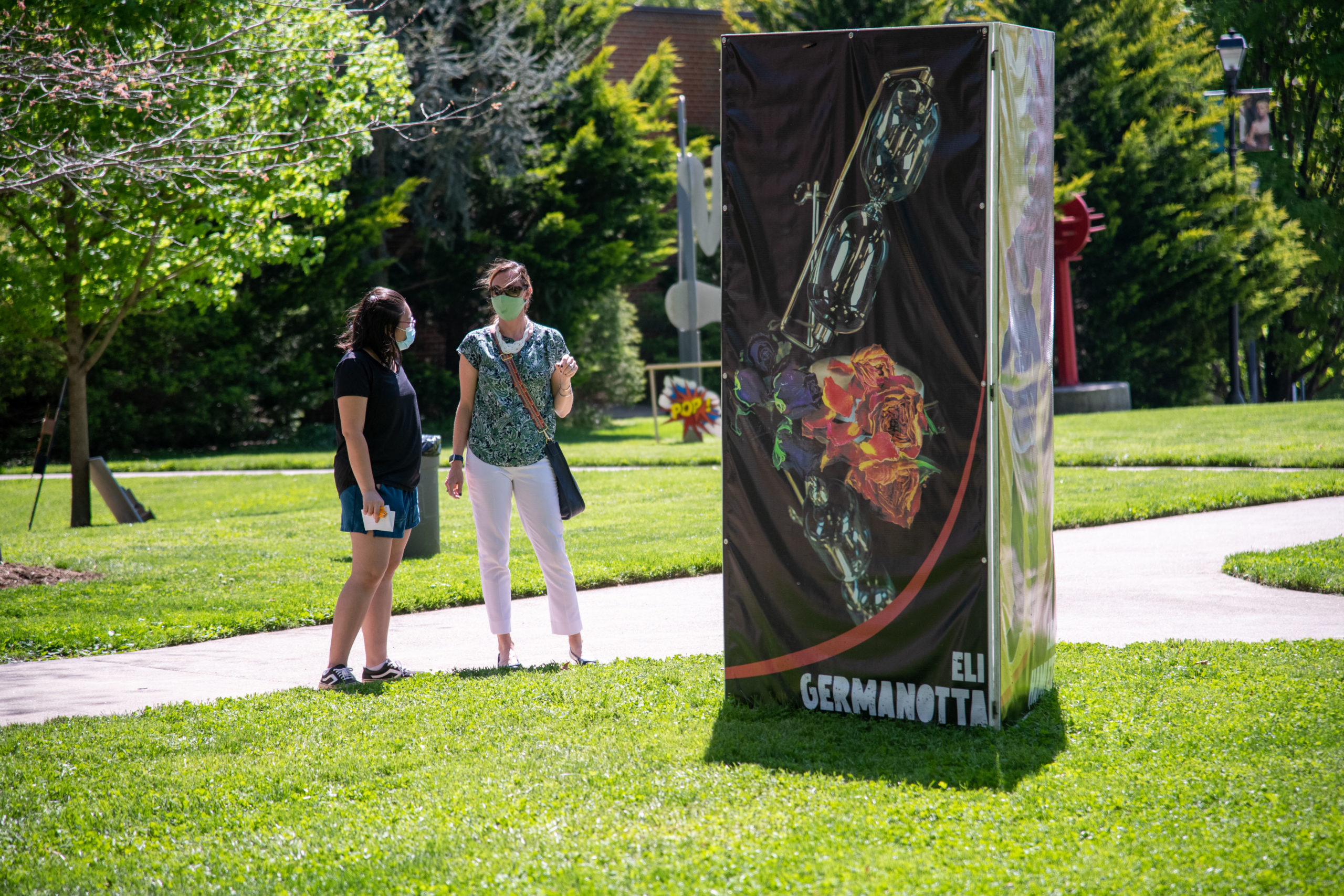 With the academic year coming to a close, many University of Lynchburg seniors are showing off what they have learned over the past four years. Both the museum studies and art programs have their senior showcases available for everyone to view.

Siobhan Byrns, assistant professor of photography and graphic design, said the art showcase was inspired by the annual poetry exhibit “Beat Burg” in downtown Lynchburg and the monoliths discovered in Utah last year.

The students’ artwork is displayed on tall boxes with each panel featuring a different piece on the Dell, just outside the Daura Museum of Art. The pieces will be displayed on campus until Friday, May 7, and will then be moved to Riverfront Park for Downtown Lynchburg’s First Fridays event.

“I think, especially this year, we have seen the need for creativity and expression for coping with isolation,” Byrns said. “The monoliths allow people to be outside viewing work.”

She added there is a possibility this type of display will be an annual fixture of the senior art showcase. “It creates a bond with the community. The idea of these going downtown and seeing Lynchburg participate in the community is a learning experience [for everyone],” she said.

Explanations for all of the students’ works are available online. 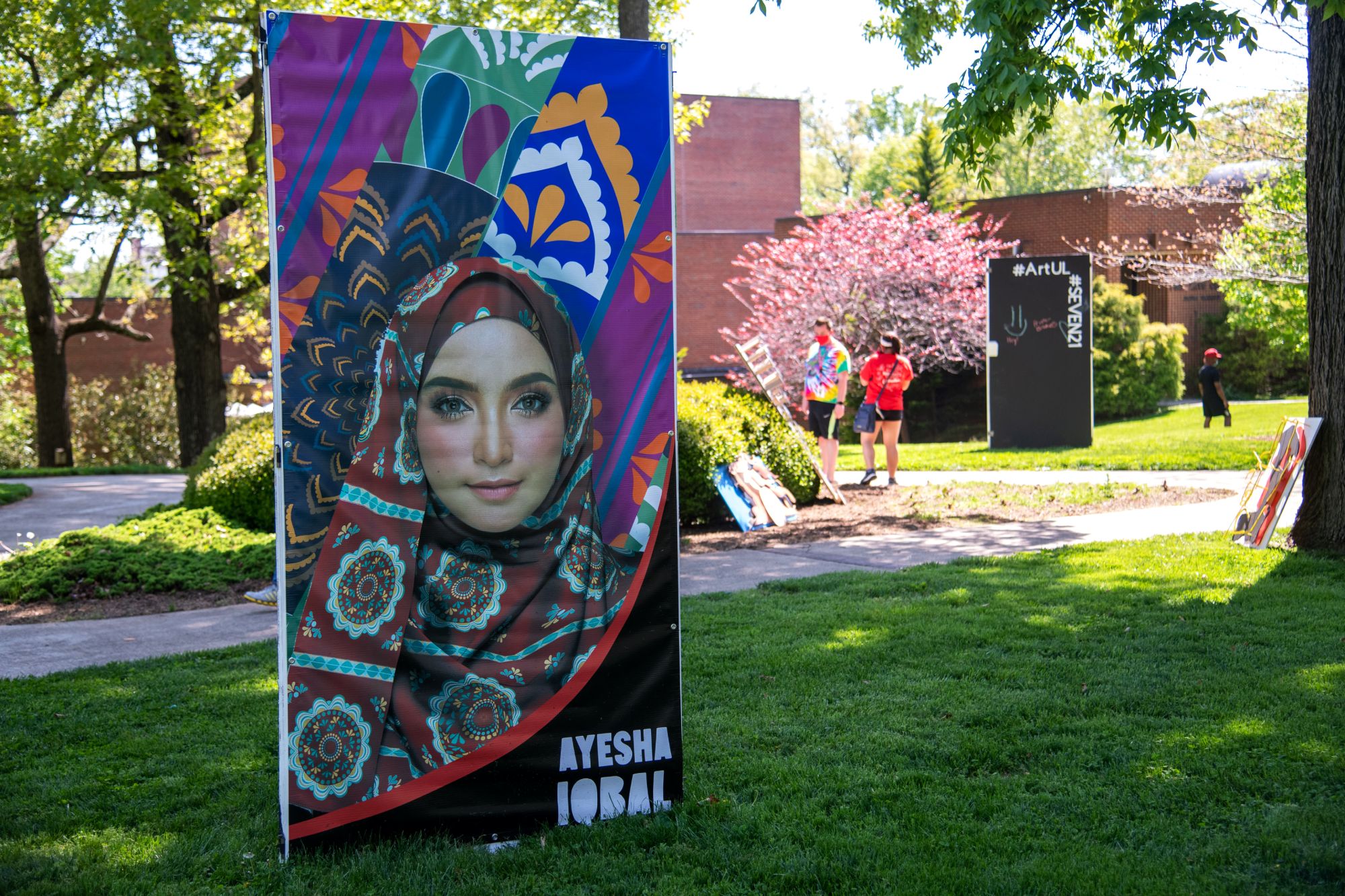 For graphic design art major Ayesha Iqbal ’21, the showcase provided an opportunity to try something new and to create something she needed. Iqbal, a Lynchburg native, wears a headscarf and modest clothing, which she has trouble finding in local stores.

“I have always gotten compliments and friends say they like my dress style and patterns, but I can’t always find what I wear shopping at the mall,” Iqbal said. “That’s where my thesis comes in. I thought, ‘Let’s try designing a fabric.’”

She talked over the idea with Byrns and was also inspired by designs from her own culture, like henna tattoos.

“I have never experienced art like this before. For me, it’s a different feeling. I never thought my work would be recognized. [At the opening reception], everyone was complimenting me,” Iqbal said. “It gives me a sense of confidence. I am super happy because it’s going downtown and I love talking to people.”

Iqbal’s fabric patterns are available for purchase on Spoonflower. She also received the Graphic Design Award and the Provost Award for her work.

Destiny Barkyoumb ’21, also a graphic design art major, was inspired by various color palettes, shapes, and human biological systems for her artwork. “I have a pretty distinct form of sketching and it tends to lean toward referencing life without being representative of that life form. I referenced a lot of biological forms, looking at everything from arteries to cells,” she said.

Her prints, displayed on one side of a monolith, resemble a butterfly’s wings in shades of gray and green. “I am really excited to have more people see it. I have gotten messages from friends who didn’t know this was going to be on campus,” Barkyoumb said. “I am excited to be able to have some of my work seen by [people in] the Lynchburg area.”

Barkyoumb received the President and Provost Award for her work.

Work by museum studies students is also being displayed on campus. Four students — Alyson Draper ’23, Sam Lipert ’23, Mikayla Minton ’23, and Ashani Parker ’21 — curated an exhibition for the Daura Museum titled “Collective Emotion.” It will be on display until May 20.

For the exhibit, the students selected objects that support the concept of “collective emotion” during the Harlem Renaissance, World War II, the civil rights movement, and the early 2000s. A number of the objects were loaned to the museum by the National D-Day Memorial, the Lynchburg Museum System, and the George C. Marshall Foundation Museum.

“Based on their research and the objects themselves, the students drafted, edited, and produced introductory and object text, and designed and installed the exhibition,” Barbara Rothermel, Daura Museum director, said. “As the professor of their class, I guided them through the process, however, the concept and the exhibition itself are solely their work.”