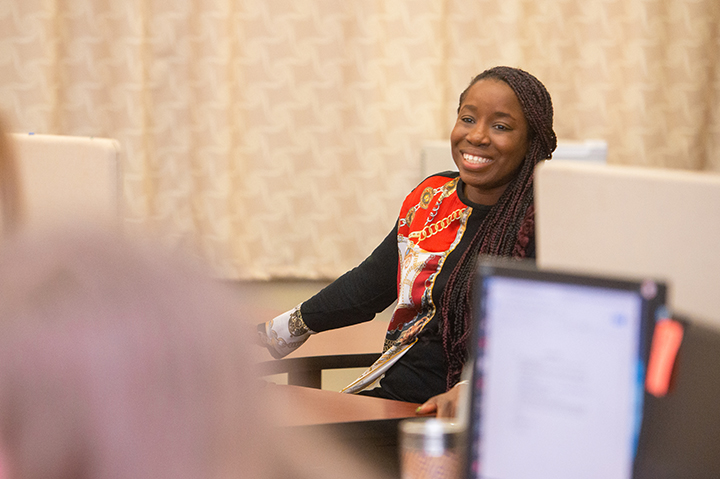 Editor’s note: This magazine story was written and edited before March 2020. We regret that that COVID-19 pandemic delayed its publication until now, but we’re happy to finally share it with you.

When she was an admissions tour guide, Katherine Daniel ’20 liked to tell tour groups about Dr. Ghislaine Lewis.

“She was my journalism professor,” Daniel said. “It’s always fun to take her class, and she’s very energetic in the classroom. I encouraged the students who came here on tour to take a class with her.”

One of her favorite parts of Lewis’s class was the music.

Lewis plays an eclectic, international playlist as students shuffle in for class each day. Caribbean, European, Asian, and African tunes, and more. Daniel said the music set the stage for discussions that went beyond the national headlines and looked at journalism on a global scale.

That comes naturally for Lewis. Her career as a journalist and a scholar has taken her to six continents, and she continues to think globally for the good of her students.

“Bringing my international perspective into the classroom has helped them think about not just their lives in Lynchburg, but how their lives connect to a wider global community,” Lewis said. “That bodes well for where they see themselves and what they can achieve once they leave Lynchburg.”

Lewis spent most of her childhood in Guyana, but she went to high school in Jamaica. Then she came to Lynchburg to attend Randolph-Macon Woman’s College (now Randolph College), where she double-majored in communication studies and religion.

Afterward, she worked as a newspaper reporter while earning a master’s degree in Florida, where her mother is a university professor. That’s when the idea of teaching really took hold. “My professors had such an impact on me, why wouldn’t I want to replicate that impact with my students?” she said.

For her PhD, Lewis went to the University of Canterbury in Christchurch, New Zealand, but a massive earthquake struck one month before she arrived. That made for an unusual beginning to her doctoral work. “They were having classes in tents,” she said.

After finishing her degree, Lewis taught at Monash University in Malaysia and also had a media policy fellowship at Oxford. She joined the University of Lynchburg faculty in 2017.

Her personal research focuses on how journalists cover stories and how that is affected by social forces. For her dissertation, she studied the story of Christopher Coke, a Jamaican drug lord who escaped justice for years until he was arrested and extradited to the U.S. in 2010. “Seventy-four people died trying to find this man,” Lewis said.

She interviewed journalists who had written about Coke, and followed in their footsteps by beating the same streets they had frequented in search of sources. That meant going into neighborhoods her parents had always urged her to avoid in high school.

“How do you put your life at stake to go into these neighborhoods to tell the stories of not only the suffering, but how these guys control these communities?” she said. “When you’re a journalist, you do incredible things for a story.”

This year, she’s working on a similar project, studying the way major newspapers missed the mark in stories about Malaysia’s 2018 election. U.S. newspapers largely ignored the election or focused mostly on the corruption of the ousted prime minister. Meanwhile, The Guardian had a reporter on the ground during the election who was able to elaborate on the reforms promised by the victor.

Back in the classroom, Lewis has a reputation for being approachable. Several students mentioned that she is always available whenever they need feedback.

T.J. Harvey ’21 said Lewis mentored him throughout her Media Writing course. Lewis sent his first article back with lots of corrections, so he went to her office to go over the marks. With time and practice, he saw a difference in his writing.

“My ability to write changed,” Harvey said. “I asked her for help, and she was there for me at every step. Once I started making corrections, I saw this is how I should write, and this is how the story should flow.”

Haley Saunders ’23, a chemistry major, had Lewis for Argument and Advocacy, a required public-speaking course. At first, she hated the idea of standing in front of a group to give a speech, even with a simple assignment such as sharing her favorite quote.

But by the end of the semester, she squared her shoulders and confidently delivered a speech about the sedative Versed being used in executions. “I grew really confident throughout the semester. I loved that class,” Saunders said. “Dr. Lewis always provided a positive environment. She really is a great teacher.”

Lewis loves seeing that kind of transformation. “My favorite thing about teaching is when there’s a breakthrough,” she said. “You’ve just got to make them feel comfortable enough in that environment to help them succeed.”