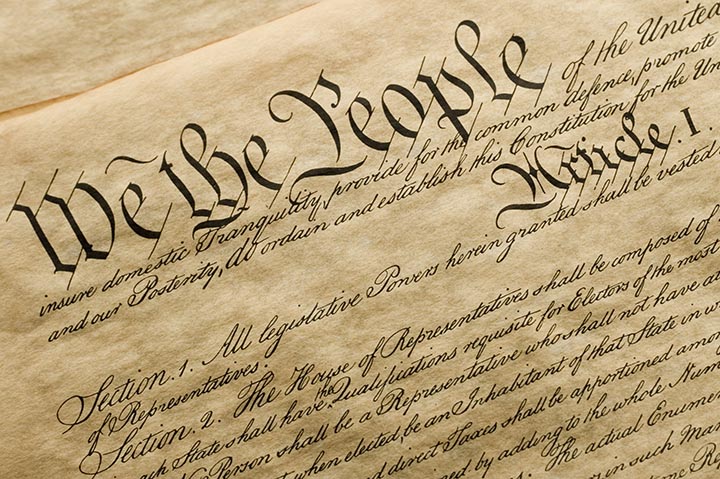 For Dr. Nina Salmon, “We the People,” the first words of the preamble of the U.S. Constitution, was a fitting theme for this year’s Senior Symposium, the capstone course of the University of Lynchburg’s general education curriculum.

“This election year offered a timely opportunity to think broadly about democracy and American ideals,” Salmon, who directs Senior Symposium, said. “A lineup that included foundational texts like the Declaration of Independence and other primary documents from our nation’s beginning formed the initial basis for the semester.

“In the wake of George Floyd’s death, and amid protests and toppling monuments, it seems irresponsible not to consider our nation’s racialized past and current conflicts. From slavery to the present day, racism is undeniably part of America’s identity.”

In developing the course, Salmon consulted with former Senior Sym director Dr. David Freier, professor emeritus Dr. Joe Freeman, current and retired faculty from an assortment of disciplines, and even an alumni group at Westminster Canterbury, a local retirement community.

She said the varied group helped her “think through the semester lineup of speakers and texts.”

Over the semester, students will read “The Underground Railroad,” the 2017 Pulitzer Prize-winning novel by Colson Whitehead. The book depicts the horrors of slavery while it reimagines the Underground Railroad, a network of safe houses and secret routes used by enslaved African Americans to escape to freedom.

“There’s a strong narrative, which makes for engaging reading, and the novel introduces a number of topics that are interesting from a variety of academic perspectives and relevant still today,” Salmon said. “It was written by a Black author, which is important to the diversity of voices we hear in the course. We are intentional about selecting speakers and authors who represent the diversity of our campus and our world.”

They also will read historic addresses by Frederick Douglass, Elizabeth Cady Stanton, Martin Luther King Jr., Abraham Lincoln, and other legendary Americans. They’ll view a series of lectures and presentations by Lynchburg faculty and others on a wide range of topics, among them slavery at Thomas Jefferson’s Monticello, American patriotism in song, Native Americans and race, race in American medicine, and why the Civil War happened.

In response to the readings, lectures, and class discussions, students will write a number of papers. The semester will conclude with a final exam and a screening of “Hamilton,” the film version of the Broadway musical.

“The idea of using ‘Hamilton’ as a ‘speaker’ actually came from the brainstorming sessions with the Westminster Canterbury group,” Salmon said. “Because we had to deliver the course differently, we decided to use the necessary shift in delivery as an opportunity to be creative in our understanding of ‘lecture.’”

This willingness to think differently about a subject is in keeping with the goals of Senior Sym. “[It] doesn’t promote an agenda,” Salmon said. “The purpose of the course is to invite students to read, think, speak, and write.

“We are not attempting to tell our seniors what to think; we are invested in promoting independent critical thinking and civil discourse. We ask our students to support their positions and claims with evidence, drawn from the presentations, the readings, and, importantly, from their own experience and expertise.”