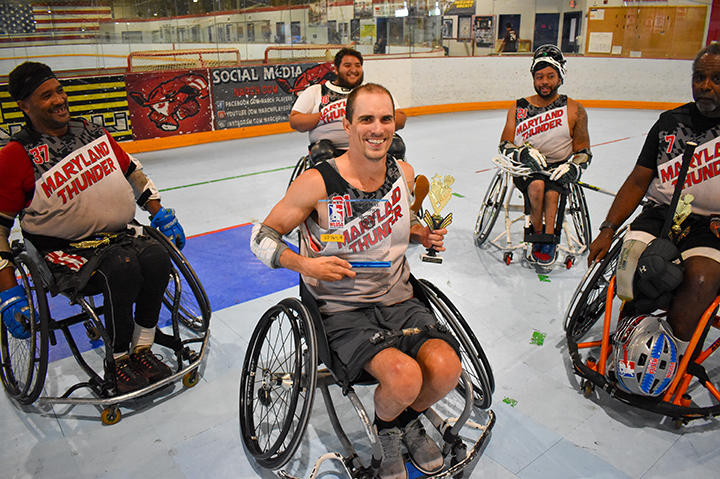 “Get tough” was the advice Ryan Beale ’13 often gave to his lacrosse teammates, and 31 was his jersey number.

And it’s still his jersey number. In fact, Beale wore jersey 31 in August 2019 when his team, the Maryland Thunder, won a national lacrosse championship.

Ten years ago, though, Beale was certain he’d never play lacrosse again. A car accident over fall break in 2009 paralyzed him from the chest down. Instead of training for spring lacrosse, he was fighting for his life.

But thanks to an unbeatable spirit and support from the Lynchburg family, Beale was able to come back, participate as a coach, finish his degree, and get into wheelchair lacrosse. He and his new teammates have an incredible connection.

“We’ve all been playing wheelchair sports for so long that we just love competing and winning,” he said. “That’s why we had this success this year.”

Beale started playing lacrosse because after as a form of preteen rebellion. He’d always played on baseball teams his dad coached, and he wanted independence. “I picked up lacrosse because he knew nothing about it,” he said. “They gave me a six-foot pole that I could whack anybody with! I was drawn with that.”

After a standout high school lacrosse career in Suffolk, Virginia, Beale’s coach encouraged him to go to Lynchburg College and play for Koudelka. It was an easy choice, since his older sister, Kristin Beale Wilkerson ’03, was an alum and the family knew the school well. So Beale arrived in Lynchburg in 2007, lacrosse stick in hand.

Beale said he actually had taken it easy on the field in high school, but Koudelka’s high standards were a wake-up call. Those standards didn’t allow for slacking on the field or the classroom. “As a freshman, it was very eye-opening,” he said. “By junior year, you’ve bought into the process that he’s establishing. With Koudelka, you had to prove yourself.”

Beale did prove himself, Koudelka said. His junior year, he had a great season of fall ball and probably would have been on the starting lineup in the spring.

“On the field, Ryan was a very good lacrosse player,” Koudelka said. “Great size. Knew the game very well. He communicated very well on the field.” 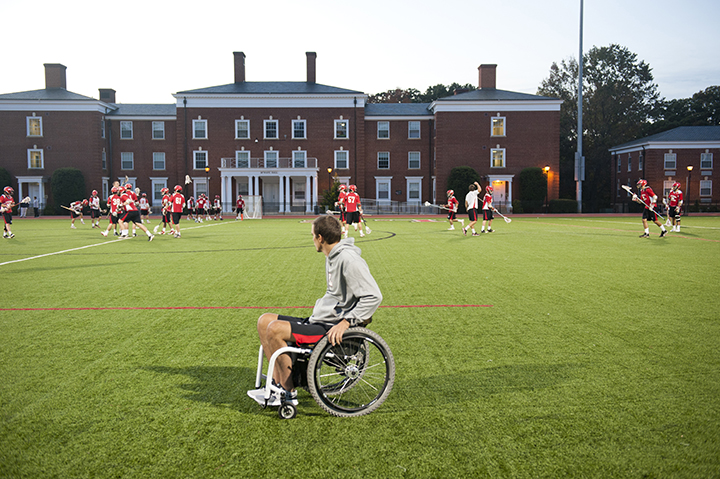 Beale’s fate twisted around 1:30 a.m. on October 17, 2009. He was home for fall break. He was driving and searching for a song on his stereo system. His Jeep ran off the road. Beale flew out. He knew he was in trouble.

“I remember the whole accident,” he said. “I knew from the get-go, once I was ejected from the car, in the ditch, and I couldn’t feel my legs. At that point, you’re really not worried about, ‘Did I break anything?’ You’re just worried about living and hoping someone finds you quickly.”

The rest of the Hornets were scattered around the country for fall break. Koudelka was leaving a football stadium in Texas when he noticed a slew of text messages on his cell phone, all asking about Beale.

As soon as the coaching staff returned from break, they drove to Norfolk, Virginia, to see Beale in the hospital. When Beale was transferred to the Shepherd Center in Atlanta for further treatment and rehabilitation, Koudelka made several trips. He was impressed by the Beales’ infectious optimism, which was shared by the medical staff.

“Ryan was in the right place, … because his attitude was great, and on top of that, there were all these people who believed in him and his ability to do great things,” Koudelka said.

That spring, Beale made it back to Lynchburg to watch his team play against Hampden-Sydney, whose roster included one of his best friends from high school. The Hornets surrounded Beale and knelt for prayer as he bowed his head.

“I think his attitude, his family, and his faith were major players in him continuing to be successful,” Koudelka said.

Beale surpassed doctors’ expectations for his recovery. He came back to Lynchburg in 2011 and lived in a campus townhome. He tried to live as independently as he could, using his truck to get around campus.

His coaches wanted him back on the team.

“We were adamant,” Koudelka said. “The natural instinct was to get him back into coaching. He was on the field, we traveled with him and everything.”

Beale’s expertise as a defender gave him a unique perspective he could use to encourage his teammates, or give the other coaches recommendations to make the team better. “Ryan’s a straight shooter,” Koudelka said. “He had no problem telling me what he thought. I respected that, and I appreciated that.”

He often told the teammates to “get tough,” which led to the team creating the “GET TOUGH” T-shirts. He traveled with the team often, allowing his peers to put his wheelchair in the bus storage area and carry him on board.

He finished his environmental science degree in 2013 and moved to Richmond, Virginia, for work with the Virginia Department of Health. He inspects restaurants, schools, and hospitals to confirm they meet regulations.

Beale was focused on his academics, coaching, the adjustment to a new way of life, and starting a career. As far as he was concerned, his athletic career would be on the sidelines.

But before long, he got a message from another Lynchburg graduate who changed that.

Back in the game

Katie Ivins Baldwin ’11 also came to Lynchburg to play lacrosse. She majored in health promotion, and she and Beale would have graduated the same year if not for Beale’s injury.

In her senior year, she interned with the Kennedy Krieger Institute, a Baltimore, Maryland, nonprofit that works to improve the lives of people with disabilities, including spinal cord injuries. That internship turned into a job, and today she supervises the institute’s adaptive sports program. From adaptive skiing to surfing, her goal is to help people get active, make friends, and build confidence while they adjust to a life-altering injury.

“It’s a great way for them to continue on the same path that they might have had before,” she said. “The Kennedy Krieger Institute is geared toward helping individuals with various disabilities. They’re all about improving lives and creating opportunities … They’re all about pushing boundaries.” 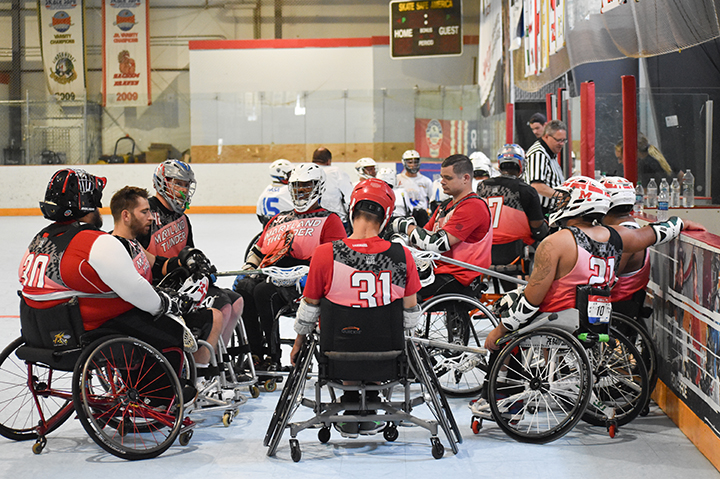 In 2014, she organized the institute’s first wheelchair lacrosse clinic. Baldwin remembered Beale’s enthusiasm for the sport and invited him to check it out.

Beale was grateful that Baldwin reached out. “We weren’t close friends, but because we both went to Lynchburg, because it’s such a small community, everyone has each other’s back,” he said. “It’s family-oriented as far as Lynchburg goes.”

Beale traveled from Sussex to Baltimore for the clinic. Baldwin remembers him showing up in Lynchburg lacrosse gear. Eager, but maybe a bit apprehensive. Once he started playing, “the rest was history,” she said.

The team travels for matches against other wheelchair lacrosse teams, but they also play exhibition games against college teams. Beale also picked up tennis and rugby between lacrosse seasons.

Wheelchair lacrosse is a lot like the original sport. Players get aggressive, and they wield their lacrosse sticks against each other. Other than a few rules, the gameplay is normal.

But it’s played on a roller hockey rink or an indoor lacrosse court, and, of course, the athletes use sports wheelchairs. Their arms do the work of moving around the court in addition to passing and intercepting.

A couple of years ago, Beale gave one of his Hornet teammates a chance to try the sport. Some of his Maryland Thunder teammates weren’t able to make it to Colorado for the Wheelchair Lacrosse USA national tournament. He called Jason Long ’11, who lives in Denver, to ask him to join in. (Able-bodied athletes are allowed to fill out a team in competition.)

Long said playing in a wheelchair was tough, but fun. “I was excited about the opportunity and I had a lot of fun with the team,” Long said. “I was thoroughly impressed with how well the guys maneuver their chairs to get past the defense. … It was great to try a new version of the sport that I love and walked away with a lot of respect for the guys on the court.”

In 2019, though, all of Beale’s teammates made it to nationals. They won eight games in the two-day tournament. “That’s a lot of lacrosse in two days,” Ryan said.

When they won the championship game, it took a while for the excitement to set in.

“Our team captain and manager was the only one that really had that reaction of throwing your hands in the air and being excited that you won a championship,” Beale said. “When the clock hit zero, we were so mentally and physically drained it took a while before we actually started celebrating.”

Beale is proud that his team won with an entire roster that is “chairbound” or “in a chair” — that’s how he chooses to describe his condition. “Disabled,” he said. “I hate that word. It’s just a characterization people put on you just because you’re in a chair.

When he does outreach to other people who have recently been paralyzed, Beale tells them, “You might be in a chair and you can’t walk, but your mind still works, therefore you still have the ability to do what you want to do.”

That’s a lesson Koudelka hopes all of his student-athletes learn from Beale. He said he sometimes tells his athletes about a metaphorical bucket. “If you put greatness into your bucket, then greatness is going to overflow from that bucket,” he said. “In Ryan’s situation, he put an extreme positive attitude into his bucket, and it overflowed.”

Beale said his family and his friends at Lynchburg were key to his ability to thrive. On October 17, 2019, the 10-year anniversary of his injury, he sent Koudelka a text.

“10yrs to this day,” he wrote. “Wouldn’t be where I am in my journey without the help from you, the team and college. So thank you.”