/ News / ‘Servant leader’ to launch presidency with acts of service 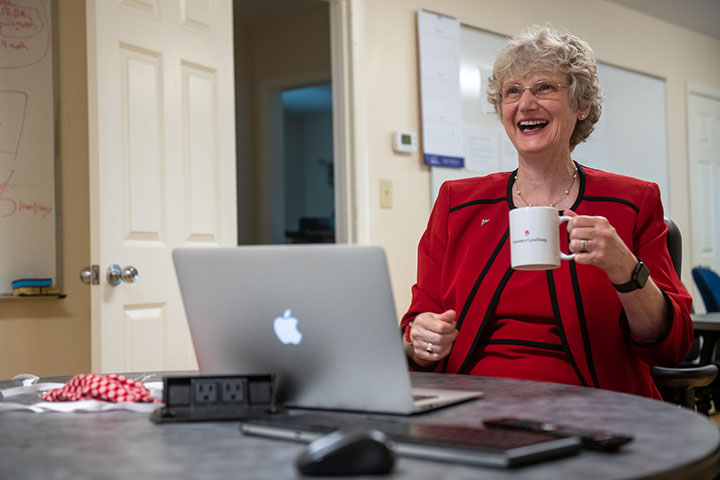 Dr. Alison Morrison-Shetlar takes over the official duties of University of Lynchburg president on Saturday, Aug. 1.

Morrison-Shetlar, who came to Lynchburg after serving as interim chancellor at Western Carolina University, describes herself as a “servant leader.” So it’s not surprising that months before she would take the reins at Lynchburg, she was already serving her new community.

“I believe strongly in leading from the front, leading from beside, and leading from behind — helping others reach their maximum potential,” Morrison-Shetlar said in an interview, shortly after being named president-elect in November 2019.

Four short months later, as the COVID-19 pandemic started to take hold in the U.S., Morrison-Shetlar joined a fledgling effort to sew cloth face masks for the University community. The goal was to make 10,000 before school started on Aug. 12. 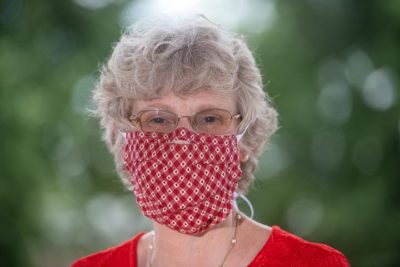 The initiative, which she called “Sewcial Hornets,” eventually involved more than 360 people — students, faculty, staff, alumni, parents, and friends of the University. Morrison-Shetlar’s sister in the United Kingdom, mother-in-law in Kansas, and friends in North Carolina joined in.

“This is the type of project that brings a community together around a common goal and unites us in supporting the safety of our students, staff, faculty, and the surrounding community,” Morrison-Shetlar said. “It takes all of us to make a difference in the lives of others and we all carry the responsibility to ensure that we do not spread this virus.”

On Aug. 1, Morrison-Shetlar will spend her first official day as president serving the greater Lynchburg community at Building Our Community Together. The event, held in downtown Lynchburg, brings together area universities, nonprofits, and other groups.

More specifically, she will volunteer with Samaritan’s Feet International, which has partnered with the University’s Master of Nonprofit Leadership Studies program to provide free shoes and socks to about 400 local children.

Morrison-Shetlar has been volunteering with the Charlotte-based nonprofit since 2014 and has developed a close relationship with founder Manny Ohonme and his family. “As soon as he knew I was moving to Lynchburg, Manny reached out and suggested a partnership,” she said.

Raised on the Scottish Isle of Bute, she said she was “just an average kid.” Her father was the county clerk. Her mother was a homemaker. At Rothesay Academy, she played basketball and field hockey and competed on the track and field team in the high jump, long jump, and 100-meter dash.

“I loved growing up on the island,” she said.

At age 18, Morrison-Shetlar left home for Dundee College of Technology — now Abertay University — where she earned a Bachelor of Science, with honors, in biology and chemistry and a PhD in biomedical sciences.

She did postdoctoral research at the Kennedy Institute of Rheumatology in London, then became chair of the molecular biology unit at the Max Planck Institute in Dortmund, Germany, and a teacher-scholar at Bochum University in Bochum, Germany.

In 1993, she followed her husband, Robert Shetlar, to the U.S., where he had a postdoctoral position in Connecticut. Over the next 20 years, Morrison-Shetlar held teaching, research, and administrative positions at colleges and universities in Maine, Connecticut, Georgia, Florida, and North Carolina.

“Dr. Morrison-Shetlar is accomplished as both an educator and a leader in public and private higher education,” Nathaniel Marshall, chair of the University of Lynchburg Board of Trustees said, in announcing her appointment last fall.

“She has shown a commitment to quality teaching, research, and collaborative leadership. We are excited to work with her and to introduce her to our students, faculty, staff, alumni, and friends of the University in the coming year.” 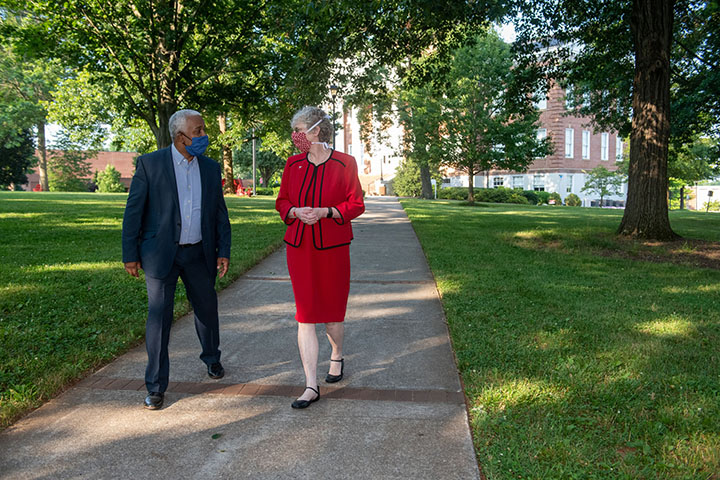 In the months after Marshall’s announcement, President-elect Morrison-Shetlar wasted no time getting to know the campus community, visiting Lynchburg on a regular basis and getting involved in initiatives like Sewcial Hornets.

Also, on their first day in office, Morrison-Shetlar and her husband, the first gentleman, will announce a new endowed scholarship to support student success.

“I already feel very much at home here and look forward to working alongside the students, faculty, staff, and community to make a difference in the lives of others,” she said in late July. Working together, we will positively influence our region, state, nation, and global community.”

It’s this community spirit, she added, that will encourage her over the academic year. “It will be different from what we thought it would be,” she said. “However, with the Hornet spirit and working together, we will be successful in supporting the success of our students and the Hornet family.”