Professor of English Laura Marello will read from her work at 3 p.m. Sunday, March 1, in the Daura Gallery at Dillard Fine Arts Center. The event is free and open to the public. 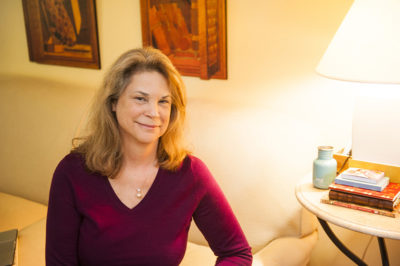 Marello will read from her new novel, “Gauguin’s Moon,” which was released last October, as well as her forthcoming novel, “Matisse: The Only Blue.” She will also read from an unpublished collection of poems titled “What Remains.”  The reading will be followed by a Q&A session and a book signing, as well as a reception of teas and desserts.

Marello has released 12 books. Her work has been published in Ligea Magazine and has been nominated for a Pushcart Prize. Her 2010 book “Claiming Kin” was a finalist for the Paterson Prize in Fiction and was nominated for the PEN/Bingham award.

In a review of Marello’s latest novel, Constance Solari, author of the novel “Sophie’s Fire,” said, “‘Gauguin’s Moon’ seethes with an intoxicating blend of wit, pathos, and hilarity that keeps us laughing even as it confronts us with disturbing truths — both personal and political. … ‘Gauguin’s Moon’ is a book about the interweaving of life and art, the power of dreams and images, and our sacred responsibility for one another.”