Lynchburg men’s lacrosse coach Steve Koudelka has a special T-shirt hanging on the back of his office door.

“GET TOUGH” it reads in large letters. In the center is a block L and the number 31.

“Get tough” was the advice Ryan Beale ’13 often gave to his lacrosse teammates, and 31 was his jersey number.

It’s still his jersey number, too. In fact, Beale wore the number 31 in August 2019 when his team, the Maryland Thunder, won the national wheelchair lacrosse championship.

“We’ve all been playing wheelchair sports for so long that we just love competing and winning.”

Ten years ago, though, Beale was certain he’d never play lacrosse again. A car accident over fall break in 2009 paralyzed him from the chest down. Instead of training for spring lacrosse, he was fighting for his life.

But thanks to an unbeatable spirit and support from the Lynchburg family, Beale was able to come back, participate as a coach, finish his degree, and get into wheelchair lacrosse. He and his new teammates have an incredible connection.

“We’ve all been playing wheelchair sports for so long that we just love competing and winning,” he said. “That’s why we had this success this year.”

Beale came to Lynchburg after a standout high school lacrosse career. His sister, Kristin Beale Wilkerson ’03, was a Lynchburg graduate, and his high school coach was friends Koudelka, who was happy to recruit Beale.

“He was very good,” Koudelka said.

Beale said he took it easy on the field in high school, but Koudelka’s high standards gave him a wake-up call. “As a freshman, it was very eye opening,” he said. “By junior year, you’ve bought into the process that he’s establishing. With Koudelka, you had to prove yourself.”

Beale did prove himself, Koudelka said.  His junior year, he had a great season of fall ball and probably would have been on the starting lineup in the spring.

That changed when he was ejected from his car during a wreck on a rural highway near his hometown, Suffolk, Virginia. It was about 1:30 a.m. He said he remembers the whole accident. “I couldn’t feel my legs,” he said. “At that point, you’re really not worried about, ‘Did I break anything?’ You’re just worried about living and hoping someone finds you quickly.”

As soon as Koudelka and his assistant coaches returned from fall break, they drove to Norfolk, Virginia, to see Beale in the hospital. When Beale was transferred to the Shepherd Center in Atlanta for further treatment and rehabilitation, Koudelka made several trips. He was impressed by Beale’s infectious optimism, which was shared by the medical staff working with him.

“I think Ryan was in the right place to be in the Shepherd Center because his attitude was great, and on top of that, there were all these people who believed in him and his ability to do great things,” Koudelka said.

“If you put greatness into your bucket, then greatness is going to overflow from that bucket. In Ryan’s situation, he put an extreme positive attitude into his bucket, and it overflowed.”

Beale came back to Lynchburg in 2011 and lived in a campus townhome. His coaches were adamant that he was still a part of the team.

“The natural instinct was to get him into coaching,” Koudelka said. “He was on the field. We traveled with him and everything.”

Beale’s encouraged his teammates and gave other coaches recommendations to make the team better. “Ryan’s a straight shooter,” Koudelka said. “He had no problem telling me what he thought. I respected that and I appreciated that.” 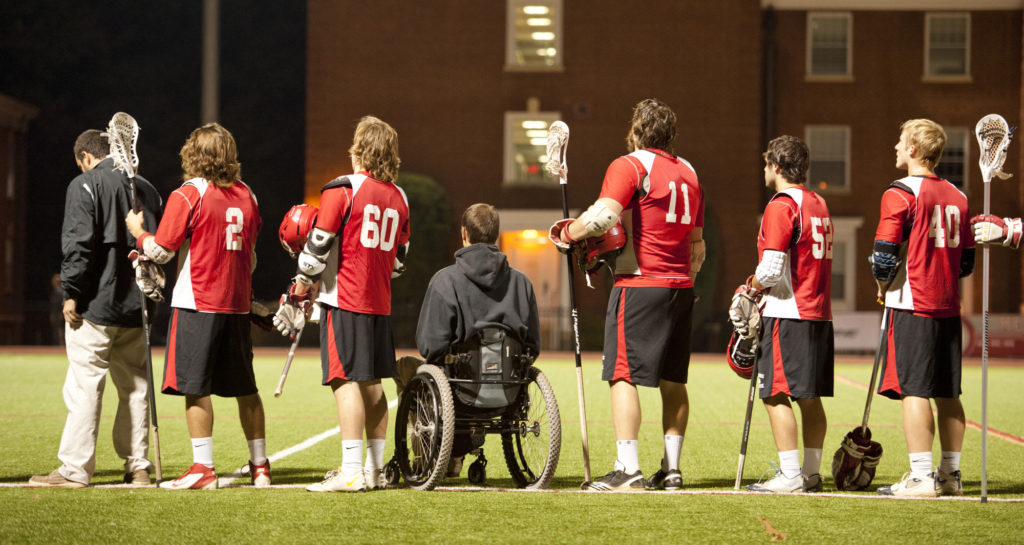 “Everyone has each others’ back. It’s family oriented as far as Lynchburg goes.”

His attitude in assistant coaching led to the team creating the “GET TOUGH” T-shirts. He traveled with them frequently until he finished his environmental science degree in 2013. He moved to the Richmond area for work.

Beale was so focused on his academics, coaching, and the adjustment to a new way of life that he didn’t give much thought to adaptive sports, even though he knew they existed. That changed in 2014 thanks to another Lynchburg alum.

At the time, the Institute was setting up a wheelchair lacrosse clinic in the Richmond area. Baldwin wanted Beale to get involved.

Beale was grateful she reached out. “We weren’t close friends, but because we both went to Lynchburg, because it’s such a small community, everyone has each others’ back,” he said. “It’s family oriented as far as Lynchburg goes.”

Baldwin remembers Beale showing up excited for the clinic in Lynchburg lacrosse gear, eager, but maybe a bit apprehensive. Once he started playing, “the rest was history,” she said.

Beale joined the Maryland Thunder. The team travels for matches against other wheelchair lacrosse teams, but they also play exhibition games against college squads.

When they won the championship game this year, it took a while for the excitement to set in.

“Our team captain and manager was the only one that really had that reaction of throwing your hands in the air and being excited that you won a championship,” Beale said. “When the clock hit zero, we were so mentally and physically drained it took a while before we actually started celebrating.”

But after the fact, the joy of the win hit home.

Beale is especially proud that the team won with a team that is entirely “chairbound” — the word he prefers because he dislikes the word “disabled.” If there’s one thing he’s learned in the past 10 years, it’s that he’s able to do anything he sets his mind to.

“Disabled” is “just a characterization people put on you just because you’re in a chair,” Beale said. “Really, since I’ve been in the chair, I’ve been more active, and I do more things, than when I wasn’t in the chair.”

When he does outreach to other people who have recently been paralyzed, Beale tells them, “You might be in a chair and you can’t walk, but your mind still works, therefore you still have the ability to do what you want to do.”

That’s a lesson Koudelka hopes all of his student-athletes learn from Beale. He said he sometimes tells his athletes about a metaphorical bucket. “If you put greatness into your bucket, then greatness is going to overflow from that bucket,” he said. “In Ryan’s situation, he put an extreme positive attitude into his bucket, and it overflowed.”

Beale said his family and his friends at Lynchburg were key to his ability to thrive. On October 17, 2019, the 10-year anniversary of his injury, he sent Koudelka a text.

“10yrs to this day,” he wrote. “Wouldn’t be where I am in my journey without the help from you, the team and college. So thank you.”