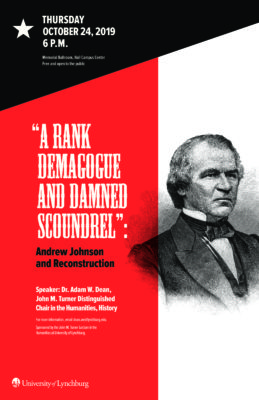 Dr. Adam Dean, a University of Lynchburg history professor, will give a lecture about Andrew Johnson — the 17th president of the United States and the first to face impeachment — at 6 p.m. Thursday, October 24, in Memorial Ballroom, Hall Campus Center. The lecture is free and open to the public.

The lecture, “‘A Rank Demagogue and Damned Scoundrel’– Andrew Johnson and Reconstruction,” will discuss the former president’s life and how he shaped events during the American Reconstruction era.

The Johnson presidency ended 150 years ago, but his relevance has increased during recent political events, including an impeachment inquiry being conducted by members of the House of Representatives. “Johnson was the first American president to be impeached and escaped conviction in the Senate by a single vote,” Dean said. “It is important for Americans to get the facts right about Johnson and his impeachment to better understand our political climate.”

Dean is the John M. Turner Distinguished Chair in the Humanities at the University of Lynchburg. He has been affiliated with the Society of Civil War Historians and the American Historical Association as well as the American Society for Environmental History and the Alumnus of the Jefferson Scholars Fellowship Program. He is the author of “An Agrarian Republic: Farming, Antislavery Politics, and Nature Parks in the Civil War Era.”