It was a gorgeous day to be on Leesville Lake — the thermometer read in the low 80s, and the sky was clear. A motorboat zipped out onto the lake not far from the dam. When it paused, Ethan Batchelor ’20 looked below the surface. 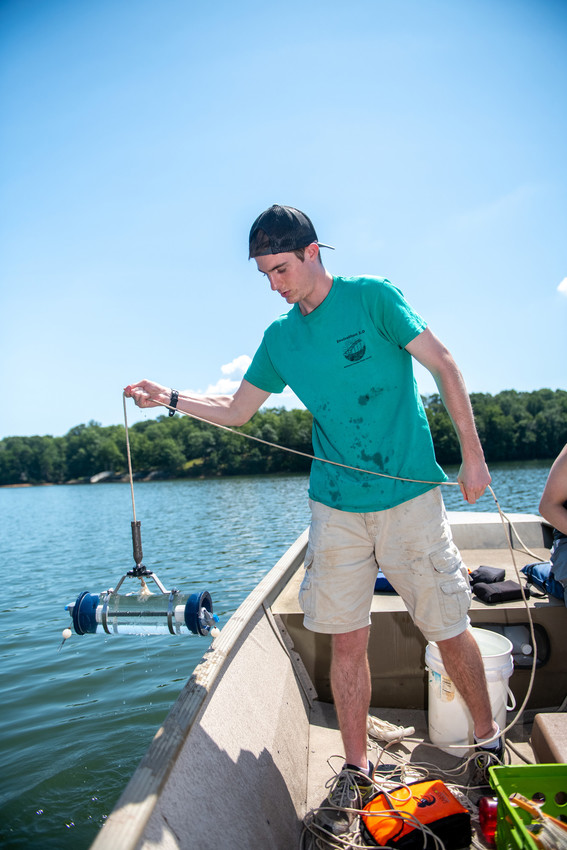 The University of Lynchburg environmental science major dunked a tube into the lake to collect a water sample from several meters below. Then he lowered a Secchi disc — a round instrument attached to a rope — to see how low it could go before disappearing in the murky water. That measurement helps estimate the clarity of water in the lake.

Batchelor was on the lake with Dr. Tom Shahady, a Lynchburg environmental science professor who has monitored the lake for a decade. About a year ago, Shahady noticed that the amount of sediment in Leesville Lake was going up, even in areas that normally should have clearer water. He asked Batchelor to help him do research to find out why.

Batchelor said his main interest is hydrology, so he agreed to help out and get hands-on experience. “All the different water quality measures you can take have a relationship with each other,” Batchelor said. “There’s a lot of water movement in a lake. It’s going to be a good time this year trying to figure it all out.”

Shahady has studied water near and far, including rivers in Costa Rica and College Lake, right by the University of Lynchburg campus. He’s an erosion hawk because he sees firsthand how it impacts life in waterways.

He said he is worried about how upstream factors are impacting Leesville Lake. An increase in sand and silt in the water signals that other problems may be present. “I’ve seen a strong relationship between sediment and pollutants,” he said.

Last fall, Shahady started studying the water in the Pigg River, which flows through Franklin County, Virginia, and feeds into Leesville Lake, to see what clues it could offer. He found levels of the E. coli bacteria as high as four times the legal limit. He asked Batchelor to work with him over the summer to look more closely at the Pigg River. The Virginia Foundation of Independent Colleges gave Batchelor a $2,000 grant to participate.

The Pigg River has seen a lot of changes in recent years, Batchelor said. In fact, the last dam in the river was removed in 2017. But there also has been more land cleared for agriculture in the region.

In addition to doing some water sampling and lab analysis, Batchelor is looking at satellite images from different years to see where forests have turned into fields. He will use that information, along with topographic maps, to determine how the shrinking of forests might increase stormwater runoff and erosion. He and Shahady will combine that analysis with lab results from water samples to determine if there is a connection.

The important thing is to make sure the problem doesn’t go unnoticed. “Unless we draw attention to it, it’s not going to be fixed,” Shahady said. “By Ethan doing this report, it could draw awareness to the issue.”

This fall, Batchelor will take more water samples from the Pigg River. He plans to write about Leesville Lake for his Westover Honors senior thesis. He’s also doing an internship for a company that samples well water, and he plans to work in hydrology after college.

That’s not only because his courses related to water have made him optimistic about job opportunities in the field. He’s also getting hands-on research experience that is developing his interest.

“Dr. Shahady is very willing and eager to do research with students,” Batchelor said. “He does a lot of work outside of the classroom. He’s just good to go to for that.”